The ruling party's leadership is demanding a probe into former Prime Minister Han Myeong-sook's 2015 conviction for illegally accepting political funds, claiming she was found guilty based on fabricated testimony.

“All circumstances indicate that she was a victim of the prosecution’s coercive investigation and the judiciary’s abuse of power,” Rep. Kim Tae-nyeon, floor leader of the Democratic Party (DP), said May 20. “She spent two years in jail, and she is still suffering. We must do something. The Justice Ministry and the prosecution must immediately start a probe to lay bare the truth.” 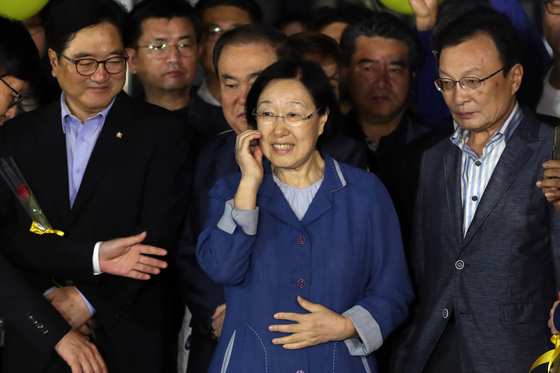 Former Prime Minister Han Myeong-sook, center, is released from Uijeongbu Prison of Gyeonggi on Aug. 23, 2017 after completing a two-year term. She was convicted in 2015 for receiving illegal political funds, but the ruling party claims she was wrongfully convicted and demanded a probe into the case. [YONHAP]

In his interviews with media later last week, Kim acknowledged that a retrial is impossible, but said an investigation of the past is necessary to reveal what he alleged were abuses of power of the prosecution and the judiciary.

Kim’s demand for a probe of the prosecution’s investigation into Han Myeong-sook and her trial was prompted by May 14 media reports on a memoir written by Han Man-ho.

According to reports by online news outlet Newstapa and broadcaster MBC, the late businessman wrote that the prosecution coerced him to change his statement in 2010. Han told prosecutors that he had given money to a lawmaker of the conservative Grand National Party, a predecessor of the opposition United Future Party (UFP), and not former Prime Minister Han. But he wrote that the prosecution forced him to change his testimony.

The veracity of Han Man-ho’s testimony was a contentious issue throughout the former prime minister’s trial. During Han’s initial trial in 2010, the prosecution used his statement as key evidence to prove the charges. Han Man-ho, however, testified in the courtroom that he was pressured by the prosecution to say he had given money to Han. The former prime minister was acquitted at the end of the first trial.

The prosecution appealed, however, and Han lost her High Court case in September 2013, receiving a two-year prison term and 880 million won in fines. The Supreme Court upheld the conviction in August 2015.

The Supreme Court at the time ruled that Han Man-ho’s statement to the prosecution during the initial interrogation was reliable, dismissing his later retraction. The court also noted Han Man-ho’s check was later used to pay the rent deposit for the former Prime Minister’s sibling, adding credibility to the prosecution’s charges.

Han Man-ho was later convicted of perjury for reversing his initial statement to the prosecution.

After the contents of Han Man-ho’s memoir became public earlier this month, Justice Minister Choo Mi-ae said Wednesday that the prosecution must be reformed to change its coercive investigation methods.

“I also agree that there is a need for a specific, fact-finding probe to lay bare what had happened,” Choo said during a National Assembly hearing.

The judiciary, however, rejected the possibility of a retrial. “There is always a possibility of a wrongful conviction,” said Justice Cho Jae-youn, head of the National Court Administration. “But we are worried that raising suspicions will create a perception that a trial of the past was wrongfully conducted.”

He added, “If a wrongful conviction is suspected, you can apply for a new trial with new evidence."

The prosecution dismissed media reports characterizing the memoir as newly uncovered evidence of Han Myeong-sook's innocence, saying it had already been presented and found to be unreliable during her trials.

Another prosecution official who participated in the investigation in 2010 argued that Han Myeong-sook was convicted based on material evidence, not just Han Man-ho’s statement.

“We were able to track down and present the source of the 900 million won that Han Myeong-sook had received,” he said. “An employee of Han Man-ho’s company also testified in the courtroom about creating the slush funds. How can the court convict her just based on a statement that was later denied, if there were no material evidences?”

A prosecutor told the JoongAng Ilbo that the ruling party's abrupt challenge to the former prime minister's conviction is political.

“I wonder if it was to create public opinion before arranging a pardon for her conviction,” he said.

Han Myeong-sook remained tight-lipped about the renewed controversy. She attended the Saturday memorial ceremony to mark the 11th anniversary of the death of former President Roh Moo-hyun, but made no remarks.

“She may feel uneasy, but she lived on with it for a decade,” an associate of Han told the JoongAng Ilbo on Sunday. “There is no need to hurry. She will wait and see how this will unfold.”

While key members of the ruling party and Justice Minister Choo demanded an investigation, other members of the DP were reluctant to take it that far.

“Some Roh royalists are making that demand, but there's no need for the party to speak for what Han wants to say,” one DP lawmaker said.

“We are not a civic group. We are a ruling party,” said another DP legislator. “We need to check first if there is enough ground to apply for a retrial, based on the law and system. That is a responsible attitude for a ruling party, with respect to the rule of law.”

The UFP attacked the DP for trying to reverse Han’s conviction.

“Using 177 seats as a weapon, the DP is trying to undermine the judiciary,” said Rep. Kim Do-eup of the UFP, referring to the number of seats controlled by the ruling party.