President Moon Jae-in will invite the incoming floor leaders of the two largest parties to a luncheon at the Blue House on Thursday, presidential aides said Sunday.

Reps. Kim Tae-nyeon of the ruling Democratic Party (DP) and Joo Ho-young of the main opposition United Future Party (UFP) will be invited to the meeting, according to Kang Ki-jung, Moon’s senior political affairs secretary.

“They will have candid talks about the overall issues, including the employment and business crisis due to the coronavirus outbreak,” Kang said. “Moon invited them, and they gladly accepted the offer. We will continue efforts to systematize cooperation by using the meeting as a starting point.”

It's been 18 months since Moon last invited floor leaders from the ruling and opposition parties. The previous meeting took place Nov. 5, 2018.

The Blue House decided to only invite the floor leaders of the negotiation blocs to allow for a substantive dialogue, according to a senior presidential aide. The DP will control 177 seats in the 300-member legislature, while the UFP will control 84.

“The political landscape of the 21st National Assembly is very different,” he said. “So we invited the floor leaders of the two largest parties. A plan to create a routine consultative body among the ruling and opposition parties and the government will be discussed.”

Moon will likely ask the two floor leaders to pass a revision to the Government Organization Act to make the Korea Centers for Disease Control and Prevention (KCDC) an independent office. It is currently an organization under the Ministry of Health and Welfare.

Moon is also expected to ask the chief negotiators to pass a third supplementary budget bill.

“Many bills sponsored by the government were not deliberated and voted on during the last legislature,” he said. “We are taking steps to bring them back and pass them. As soon as they are ready, we will submit them to the National Assembly.”

He said the government will start submitting the bills as soon as the new National Assembly opens on May 30.

“Among the bills to be submitted, the top priority will likely be the third supplementary budget bill,” he said. “Restructuring the KCDC is also crucial to prepare for the second pandemic of the coronavirus.”

Moon is also scheduled to give an address to the legislature. The speech is planned for early June.

Meanwhile, the UFP said it will formally appoint Kim Chong-in to temporarily serve as the party's chairman this week.

The UFP has remained leaderless since former Chairman Hwang Kyo-ahn resigned in the wake of the party's crushing defeat in the April general elections. Rep. Joo, the new floor leader, has been serving as the acting chairman. 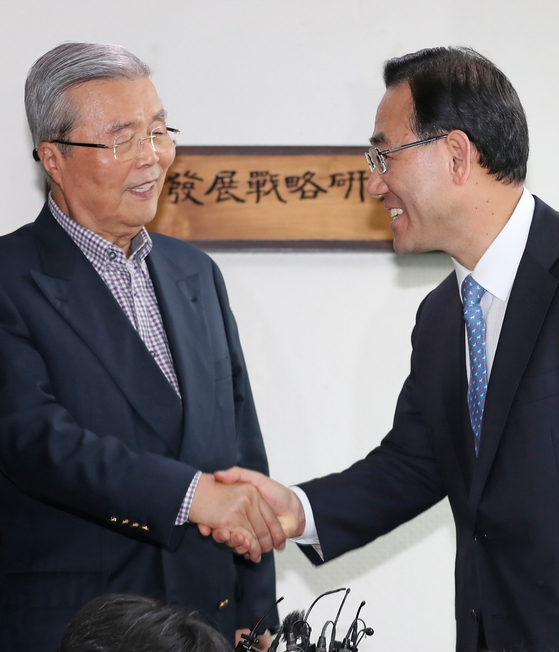 Kim Chong-in, left, shakes hand with Rep. Joo Ho-young, floor leader of the United Future Party, on Friday. They agreed that Kim will head the party as interim leader until April next year.

The party had previously planned to name Kim, the party's former chief campaign manager, as an interim head for four months until the the party elects a new chairman in August. Kim, however, effectively turned down the offer, saying he would only be interested if he is given enough power and time to completely reinvent the party and prepare it for the next presidential election in March 2022.

The UFP will hold a national delegation meeting on May 27 to change the internal regulations to extend the emergency leadership term through April 2021.

On May 22, the UFP’s lawmakers-elect overwhelmingly approved a plan inviting Kim to run the party as the interim leader until the by-elections in April of next year. Joo paid a visit to Kim later that day to inform him of the party’s plan, and Kim accepted the offer.

“Rather than finding a political significance, I will form the emergency leadership with the people based on ability and experience,” Kim told the JoongAng Ilbo on Sunday.

The UFP’s Constitution says the emergency committee can have up to 15 members including the chairman. Floor leader Joo and Chief Policymaker Lee Jong-bae are among the members.