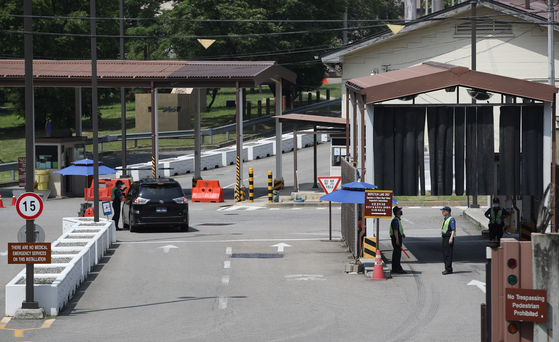 The entrance to the U.S. Army Garrison Yongsan in central Seoul Wednesday after the Pentagon accepted Seoul’s proposal to fund the labor costs for all Korean personnel working for the U.S. Forces Korea (USFK) through this year. This agreement, as the two sides struggle to seal a new defense cost-sharing agreement, is expected to effectively end the furlough of some 4,000 Korean employees of the USFK. [YONHAP]

The U.S. Department of Defense announced Tuesday it accepted Seoul’s proposal to fund the wages of all Korean personnel working for the U.S. Forces Korea (USFK) through the end of this year as defense cost-sharing negotiations continue to drag on.

Washington accepted Seoul’s proposal to provide over $200 million to fund the wages of all Korean workers for the USFK “through the end of 2020,” the Pentagon said in a statement.

Washington was stepping back from a previous rejection of Seoul’s proposal to strike a separate deal on the Korean personnel wages, saying it would “greatly detract” from reaching an expedited, comprehensive agreement.

If anything, the move seemed to signal that a resolution to the talks was unlikely soon.

The furlough in place for some 4,000 Korean employees working for the USFK since April 1 was due to Seoul and Washington's inability to reach a new Special Measures Agreement (SMA) after their previous deal expired on Dec. 31 last year. Effectively, the furlough will come to an end.

The Pentagon said Tuesday that the decision was “a direct reflection of the United States’ commitment” to readiness, the Korean employees and to the alliance, which it described as “the linchpin of peace and stability on the Korean Peninsula.”

It added that the USFK expects all Korean employees to return to work no later than mid-June.

The two sides kicked off their 11th SMA negotiations last September to decide on Seoul’s contribution to the stationing of some 28,500 U.S. troops on the peninsula.

Seoul proposed in February to first reach a deal on the payment of wages for the Korean workers for the USFK, who risked being furloughed, but Washington turned this down favoring an all-encompassing agreement instead.
On the eve of the furlough of workers, Jeong Eun-bo, Korea’s top negotiator for the SMA, said in a press briefing that the two sides were at the “final stages” of negotiations. Earlier in March, he held talks in Los Angeles with his American counterpart, James DeHart, a senior adviser in the U.S. State Department’s Bureau of Political-Military Affairs.

However, U.S. President Donald Trump ended up rejecting Seoul’s offer. Seoul had proposed a 13 percent increase as its best offer. The Trump administration reportedly expects Korea to pay around $1.3 billion annually, or around a 50 percent increase from the previous year.

In the one-year 10th SMA signed in February 2019, Seoul agreed to pay around 1.04 trillion won, which amounted to some $920 million at the time of implementation and around 8.2 percent more than what it spent the previous year.

But placing nearly half of some 9,000 Korean personnel working for the USFK on unpaid leave for an indefinite period of time since April has raised concerns about the impact on the combined defense posture and also the livelihood of these workers.

Korea in April passed a special law to provide wages for the furloughed workers and notified the United States of its plans to pay the Korean personnel first and then deduct the amount from the financial contribution agreed upon in the new SMA.

A Korean Foreign Ministry official confirmed Wednesday that Washington agreed to Seoul's proposal to settle the wage issue first and said further details are being arranged. Such an agreement would require approval by the National Assembly.

The Korean Ministry of National Defense “welcomed” the U.S. decision to end the furloughs and said the two sides will work toward reaching a defense cost-sharing agreement “at an early date.”

Gen. Robert Abrams, commander of the USFK, expressed enthusiastic support for the agreement on the payment of the Korean personnel in a statement Wednesday and underscored that the bilateral alliance “remains ironclad, unbreakable, and the linchpin of peace and stability in Northeast Asia.”

Abrams said, “This decision effectively ends the partial furlough due to a lapse in last year's Special Measures Agreement, and we expect our entire workforce to return back to USFK within the next few weeks.”

However, he noted that this deal was “a short term solution for labor cost sharing” and “highlights the need for an overall Special Measures Agreement for the long term.”

The Pentagon in a statement likewise urged “equitable burden-sharing” and urged “a fair agreement as quickly as possible.”

It added, “The United States has shown considerable flexibility in their approach to the SMA negotiations, and requests that the ROK [Republic of Korea] does the same," warning that the “USFK’s mid- and long-term force readiness remains at risk” without an SMA.

Defense cost-sharing was not discussed in President Moon Jae-in and U.S. President Donald Trump’s phone conversation on Monday evening, during which the United States invited Korea to the upcoming Group of Seven, or G7, summit, according to officials.

However, it is expected to be a key issue in an upcoming videoconference between Korean Defense Minister Jeong Kyeong-doo and U.S. Defense Secretary Mark Esper expected to be held later this month.