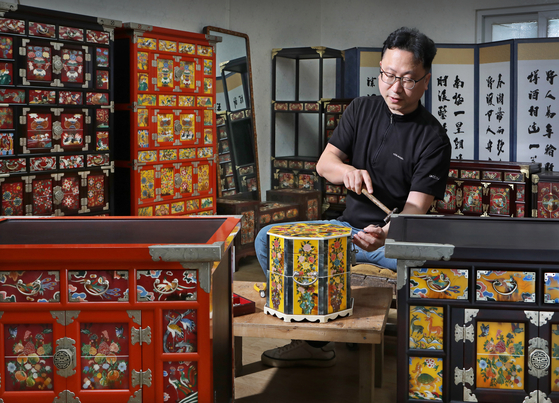 Han Ki-ho works on hwagak crafts at his studio located in Icheon, Gyeonggi. Hwagak is a traditional decorative technique using ox horns. He learned the technique from his father Han Chun-seop (1949-2015), who was a master artisan in hwagak. [PARK SANG-MOON]

A studio nestled in a small village of Icheon, Gyeonggi, is nearly bursting at the seams with small colorful furniture and accessories painted red, yellow, black, blue and white — known as ohbangsaek or the traditional five colors of the country. Everything from a small closet to a pencil case to a portable dressing table is adorned with the five colors, along with hwagak, a traditional decorative technique using ox horns.

The studio is the workplace of Han Ki-ho, the son of Han Chun-seop (1949-2015), who was a master artisan of hwagak. Master craftsmen of this technique are called hwagakjang. He was designated the No. 29 intangible cultural property of Gyeonggi. 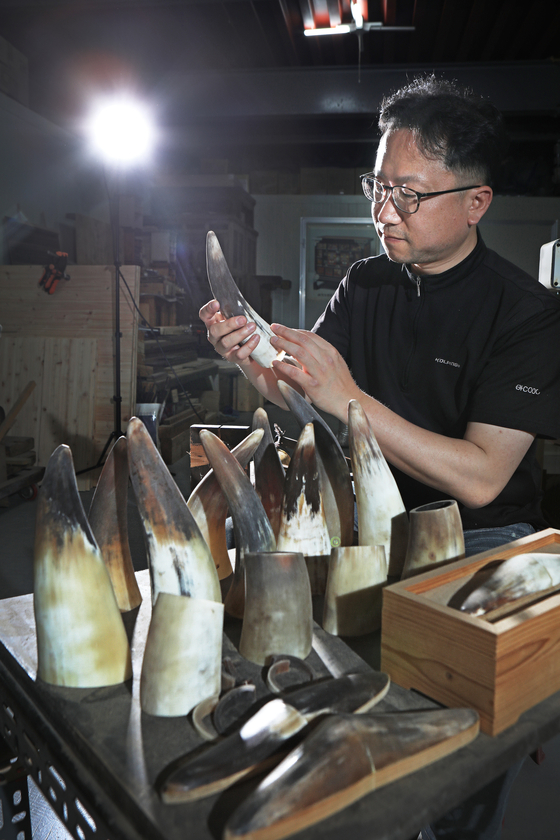 
Hwagak uses the horns of young oxen. The horns are first boiled and then made into thin, transparent  sheets. Artisans draw on the back sides of the sheets using pigments and create drawings for decoration. When the decorations are ready, the artisan carves containers out of wood, be it a pencil case or a closet, and paints ottchil, or traditional lacquer varnish, onto the containers. After that, drawings are attached, and other decoration pieces such as a metal lock are added. The hwagakjang is in charge of this whole process.

The decorative technique of using ox horns is the original way to embellish containers that is only done on home soil. It was mostly used back in the late Joseon Dynasty (1392-1910) by royal families. It is said that hwagak was especially thriving between the 17th century and mid-19th century. In the early 1900s, there used to be about 60 hwagak workshops near where the current Yanghwa Bridge in western Seoul is located, but the sophisticated technique was too pricey for a majority of people and it began to go downhill since then.

To make matters worse, the neighborhood where the workshops were located was flooded, which nearly wiped the traditional technique out. But hwagakjang Eum Il-cheon (1908-1973) kept pursuing his career even during the Japanese colonial period, and he taught a few people who were interested in the technique.

Han’s father was one of Eum’s students. He initially made mother-of-pearl lacquerware, but he switched to hwagak and learned all the techniques needed for hwagak from Eum for three years starting in 1967.

After being discharged from his military duty, the elder Han opened a hwagak workshop in Seongnam, Gyeonggi.
The master artisan operated his business in Seongnam for 40 years and relocated to Icheon, Gyeonggi, where he was born and raised, with his second son Ki-ho in 2013.

Having a father who spent most of his time making hwagak crafts and a mother who assisted his father, Han naturally had access to the traditional technique growing up. 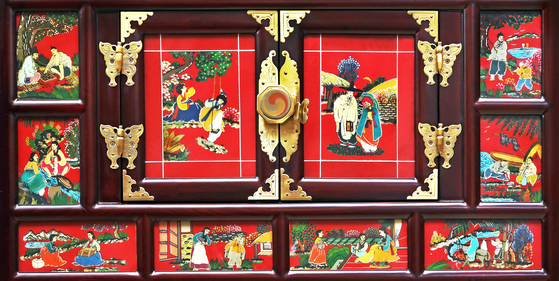 A chest created by Han Chun-seop. The drawing is inspired by painter Sin Yun-bok from the Joseon Dynasty (1392-1910). [PARK SANG-MOON]

Han used to spend time playing with tools his father used. Sometimes, he borrowed paintbrushes from his mother and drew with them.
Beginning in middle school, Han helped out his father by grinding ox horns and making them into paper-thin sheets.

Han’s older brother Ki-deok also followed in the footsteps of his father, but he landed a job after graduating from a college. But he returned to the family business at 35 after quitting his job despite harsh opposition from his mother. Han wanted to promote hwagak to the public, but it didn’t take long for him to realize it was a daunting task. Instead, he focused on working on hwagak crafts.

Han’s father never taught techniques to his sons. The father wanted his sons to learn by themselves. He also used to tell his sons that “you have to remember your failures” or “the techniques need to be within you. Otherwise, they are not yours.”

Han and his older brother picked up their techniques by looking at their father.

Hwagak boasts flamboyant colors and sophisticated techniques, and it is a technique only found in Korea, but still, the average person has little knowledge about it because the crafts were used by only a handful of people from royal families or those who belonged to the upper class. 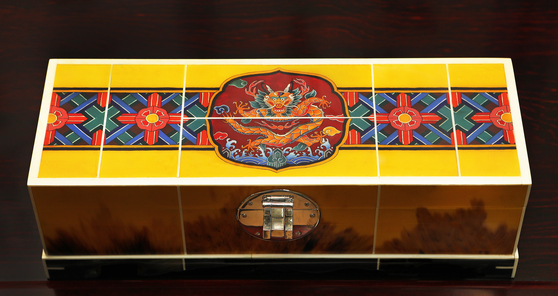 A jewelry box made by Han Ki-ho with drawings of beasts and dancheong (traditional decorative coloring on wooden buildings). [PARK SANG-MOON]


In addition, hwagak crafts are still pricey and people who produce the crafts have a limited number of sales channels. About five or so hwagak studios are in operation across the country right now.

It comes as no surprise that Han has been facing financial difficulties, but he never tires of making hwagak crafts. He is rather happy to continue his work. His father used to tell him to “have wisdom and courage.” Han recalls the words of wisdom whenever he goes through difficult times.
The first thing Han does when he wakes up these days is type hwagak into search engines to see the latest updates on the traditional technique. Han said he doesn’t want to miss a thing about hwagak-related projects organized by local governments.

He also tries to be strict with himself to stay more focused on work because he believes it is a way he can keep his studio and promote the traditional technique he learned from his father.