[Zoom Korea] When life gives you hanji, make a rainbow

[Zoom Korea] When life gives you hanji, make a rainbow 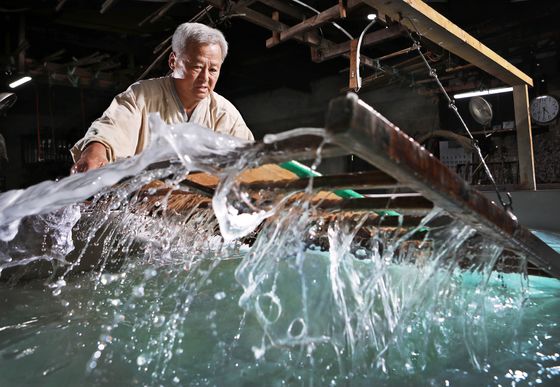 Jang Eung-yeall, who is designated as the No.32 intangible cultural asset of Gangwon Province for his craftsmanship in making hanji or traditional Korean paper, produces hanji at his studio, located in Usan-dong, Wonju, Gangwon Province. He makes the paper using a tool called oibal. [PARK SANG-MOON]

Wonju, located in the southwestern part of Gangwon Province, has long been considered the home of hanji, thanks to its abundance of paper mulberry, the key material for the traditional Korean paper. Until three decades ago, a myriad of hanji factories were in full operation in the region.

But with the advent of paper from the West, which arrived in the 1970s, the use of hanji began to decline with mass-produced paper taking its place.

Now, just a few master artisans keep producing hanji, Jang Eung-yeall being one of them.

In September last year, he was designated as the No.32 intangible cultural asset of Gangwon Province for his craftsmanship in making the traditional paper.

Jang has been dedicating his life to hanji since 1975. Even now, he personally undertakes each and every process to make the paper in the traditional way from collecting tree branches to peeling bark.

Making hanji has been a family business for Jang. His grandfather began making the paper during the Korean Empire (1897-1910) in Hwanghae Province in North Korea. Jang’s father continued the family tradition and came to settle in Wonju from the North during the 1950-53 Korean War. He continued to make hanji until he passed away in 1985.

Jang learned all the techniques while acting as his father's assistant when he was growing up.

His father was eager to teach his son everything about hanji but Jang found the whole process too painstaking and labor-intensive.


Hanji is often dubbed baekji in Korean as producing the the paper is said to require baekbeon, or 100, touches. The tedious task is said to cause some papermakers to develop han, an emotion of grief or resentment, and that is how it got its name.

After being discharged from mandatory military service in December 1979, Jang continued making hanji, working from 3 a.m. until 6 p.m. The job was often the cause of arguments with his father, with Jang complaining that the physically taxing job did not pay well enough for what it entailed.

Finally Jang decided that he had had enough and signed up to take an electrician's course at a vocation training center without his father’s knowledge. After he got his license, he moved straight to Seoul.

After landing a job at Hyundai Engineering and Construction in 1982, Jang worked at various construction sites, even as far away as Saudi Arabia, but abruptly returned to Wonju when his father passed away.

In his will, Jang's father said he wanted his son to continue the family business of making hanji.

Jang knew that he could make more money if he kept working on construction sites but decided to follow his father’s wishes.

He later realized that along with the business his father had also left him a lot of debt.

Jang used part of the money he earned in Saudi Arabia to pay off the debts and then with the rest of the money he purchased paper mulberry and embarked on the hanji making process once again.

He focused on producing baekji or white paper, mostly used for traditional houses. But the income he was earning simply wasn't enough to feed his family. He wanted to find a solution. And one day, while strolling through Insa-dong, a neighborhood filled with antique shops and old Asian art pieces, colored hanji used for gift wrapping, offered him the answer he was looking for. 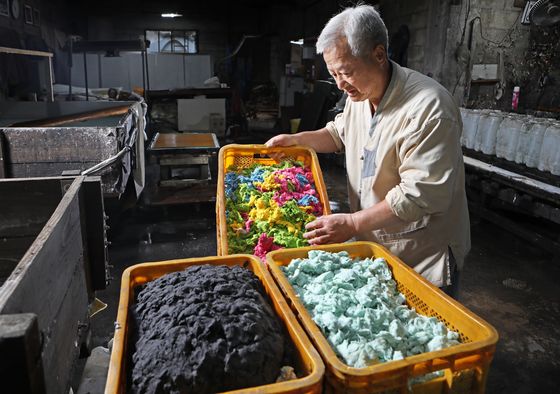 Jang transports boxes of fibers made from paper mulberry, the key material for hanji. [PARK SANG-MOON]

Jang began working on colored hanji in 1988 and since then, it has become his signature.

More than 90 percent of Jang’s hanji is colored. In fact, he's created 230 different types of colored papers so far.

Thorough preparation is needed when making colored hanji because the procedure is tricky. Depending on the types of dyes and total amount being used, outcomes can starkly vary. Because of this, Jang makes a habit of jotting down every little detail of his work process on each piece of colored paper.

He goes through a series of trials and errors to produce the exact color he wants and says reproducing the exact shade he has imagined is the most difficult part of the entire process.

The colored hanji created by Jang is dazzling. The paper itself is smooth and incredibly durable. There is an old saying that says hanji lasts for 1,000 years while silk only lasts for 500.

Its unique texture, smooth on one side and coarse on the other, helps hanji to be resistant to humidity.

While the business of hanji is not a financially lucrative one, Jang takes pride in what he does and believes that he is the best in his field.

It has been a long and lonesome journey for Jang but things are slowly beginning to change.

He was once concerned that his family's tradition would end with him but now his children are very supportive. Jang’s daughter and son-in-law started assisting him three years ago.

His son, who used to be a badminton player for a national team, is interested in making hanji, too, and Jang has hope that his family will continue the tradition of making hanji for a fourth generation.