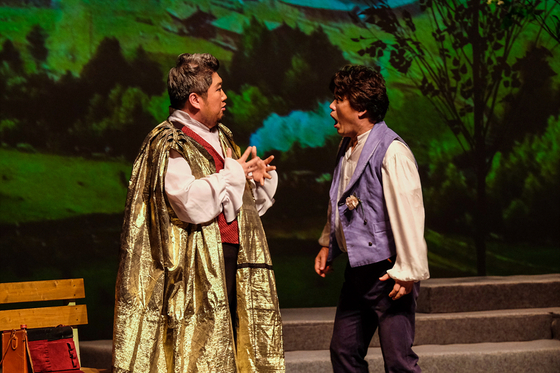 THE TELEPHONE AND THE MEDIUM
Seoul Arts Center, Jayu Theater
June 4 – Sept. 5: The country’s annual opera festival kicks off with “The Telephone and The Medium,” presented by local opera troupe De Arte Society. It will be performed between June 4 and 7. “The Telephone,” a modern comedic opera written by Italian-American composer Gian Carlo Menotti, will be presented in the first act. “The Telephone” is a story about Ben, who wants to pop the question to his girlfriend Lucy, but she’s busy on the phone and never allows Ben a moment to start a conversation. Ben eventually decides to cut the cord of his girlfriend’s telephone. In the second act, another of Menotti’s pieces, “The Medium,” is shown. It is a story about Madame Flora, who says she can communicate with the souls of the dead but turns out to be nothing but a fake who cheats vulnerable people who have lost their loved ones.The two operas will be performed in English, with Korean subtitles. Tickets are priced between 50,000 won ($40) and 70,000 won.
The opera starts at 8 p.m. on Thursday and Friday; 5 p.m. on Saturday; and 2 p.m. and 5 p.m. on Sunday.
Another featured opera of the festival will be “L'elisir d'Amore,” written by Italian composer Gaetano Donizetti. It will be performed between June 12 and 14.
The opera follows the relationship between Adina, a beautiful and wealthy but fickle young lady, and Nemorino, a clumsy and poor yet affable man. The opera will be performed in Italian with Korean subtitles.
The opera starts at 8 p.m. on Friday; 2 p.m. and 6 p.m. on Saturday; and 3 p.m. on Sunday.
Four more operas will be presented during the festival period across various venues in Seoul. For more information about the festival, visit http://www.koreaoperafestival.com/2020/ (Korean only).
Nambu Bus Terminal Station, line No. 3, exit 5.

GISELLE
Seoul Arts Center, Opera Theater
June 10 - June 14: The Korean National Ballet presents “Giselle,” a popular ballet piece, which follows a young peasant girl named Giselle. Giselle falls in love with Albrecht, a nobleman who disguises himself as a commoner to approach Giselle. Giselle soon gets to know that she was deceived by Albrecht, and the fragile girl dies of heartbreak. The second act takes place near the grave of Giselle. The cemetery is haunted by spirits of the deceased. They all died after being betrayed by their boyfriends and they are collectively called Willis. They take revenge on random young men by enticing them to the forest and making them dance until they die. One night, Myrtha, the queen of Willis, summons Giselle and plans to kill Albrecht, but Giselle wants to stop her lover from falling victim. The ballet is directed by Kang Sue-jin, a renowned ballerina until her retirement in 2016. The ballet performance starts at 7:30 p.m. on Wednesdays, Thursdays and Fridays and 3 p.m. on weekends. Tickets range from 5,000 won to 50,000 won.
Nambu Bus Terminal Station, line No. 3, exit 5.


MOZART!
Sejong Center for the Performing Arts, Grand Theater
June 11 - Aug. 9: The growing pains of genius musician Mozart unfold on the stage in the musical “Mozart!” which returns to Korea nearly four years since it was last performed. “Mozart!” revolves around the life of Wolfgang Amadeus Mozart. Under the guidance of his strict yet loving father, Mozart and his sister Nannerl have performed for aristocrats since they were young, but now that he is older, Mozart grows sick of the society he belongs to. He wants to escape from reality, so he goes on a music trip.
But the death of Mozart’s mother eventually brings him back to his former life. And the musician makes up his mind to stand up against people who try to control his life. The musical took home 11 awards from various local musical awards when it premiered in 2016.
Singer-actor Kim Jun-su, a member of K-pop boy band JYJ, and musical actors Park Kang-hyun and Park Eun-tae will alternate the role of Mozart. The musical starts at 7 p.m. on Tuesdays and Thursdays; 3 p.m. and 8 p.m. on Wednesdays and Fridays; 2 p.m. and 7 p.m. on Saturdays and 3 p.m. on Sundays. There are no shows on Mondays. Tickets range from 70,000 won to 150,000 won.
Gwanghwamun Station, line No. 5, exit 8.


CEREMONY 64
LG Arts Center
June 5-7: People used to dance through rituals whenever they wished for something, and their dances have been developed over time.
The National Dance Company of Korea (NDCK) compiles all the local, ritual dances from various times, from the one performed during the Confucian culture to the butterfly dance from Buddhism and the salpuri (soul-purifying) dance originating from shamanism, but the dance troupe does not forget to add its modern touches to centuries-old dances. The dance company says the audiences will be overwhelmed by group dances of the performers. Choreographed by Yun Sung-joo, the former artistic director of the NDCK, the performance starts at 8 p.m. on June 5 and 3 p.m. on June 6 and 7. Tickets range from 20,000 won to 50,000 won.
Yeoksam Station, line No. 2, exit 7. 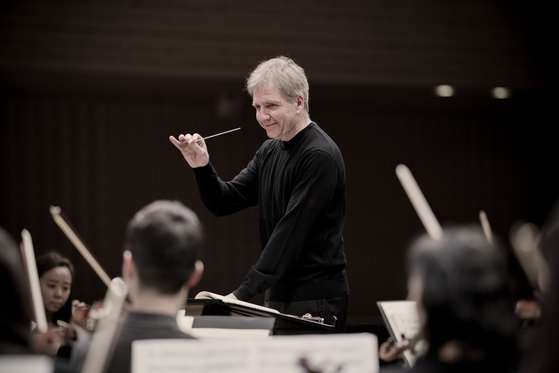 Maestro Thierry Fischer and the Seoul Philharmonic Orchestra will hold a two-day concert on June 18 and 19 at the Lotte Concert Hall. [MARCO BORGGREVE]

AIMEZ–VOUS BRAHMS?
Lotte Concert Hall
June 18, 19: The Seoul Philharmonic Orchestra presents a two-day classical concert titled “Aimez-vous Brahms?,” which translates to “Do you like Brahms?” The title comes from a novel written by French author Françoise Sagan. The orchestra will collaborate with two Swiss musicians — conductor Thierry Fischer, pictured, and pianist Francesco Piemontesi. Together they will play pieces of Johannes Brahms such as “Tragic Overture in D minor Op. 81” and “Piano Concerto No.1 in D minor Op. 15.” The concert starts at 8 p.m. on both days. Ticket prices range from 10,000 won to 70,000 won.
Jamsil Station, line No. 2, exit 1 or 2.

THE COMPLETE PERFORMANCE OF PANSORI
National Theater of Korea, Haneul Theater
June 20: The National Changgeuk Company of Korea presents a pansori (traditional narrative singing) performance by pansori master Kim Soo-yeon. The pansori maestro will sing the complete pansori of “Sugungga,” one of the five remaining pansori pieces in Korea. As the tale revolves around animal characters with many comical elements, it is recommended to those who are new to the traditional genre of the music performance. Set in an underwater palace, the Dragon King becomes seriously ill and is in need of a liver from a rabbit as a cure. In order to help the king, a turtle, the king’s loyal servant, goes on a journey to land with a plan to trick and kidnap a rabbit. Completing a single pansori takes between three and eight hours on average. The Complete Performance of Pansori is one of the permanent projects of the National Changgeuk Company of Korea with the aim of promoting the traditional music genre. The company says only the best can perform on the stage. The performance starts at 3 p.m. All seats are priced at 20,000 won.
Dongguk University Station, line No. 3, exit 6. 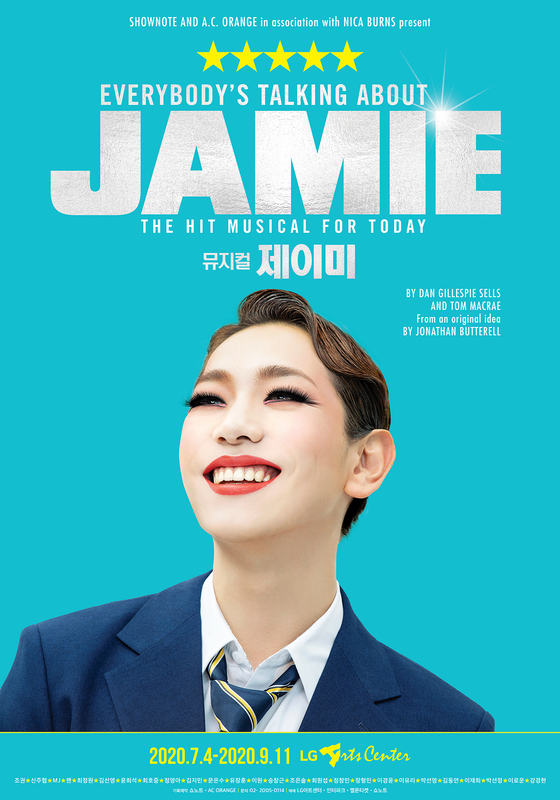 July 4 - Sept. 11: Award-winning musical “Everybody’s Talking about Jamie” is premiering on home soil. The Korean production is simply titled “Jamie.” The hit musical centers around Jamie New, a 16-year-old misfit who is about to graduate from high school. The boy, who wants to become a drag queen, eventually decides to attend a prom party wearing a dress. While browsing for an outfit to wear to the upcoming party, Jamie comes across Hugo, the owner of the clothing shop and a legendary drag queen. After the encounter, Jamie comes to perform as part of a drag queen show prior to the prom and becomes an overnight star at his school. But the school refused to allow Jamie to show up at prom wearing a dress. Jamie also has to deal with his strict father who doesn’t want to accept his son. The musical is a story about a boy overcoming all the prejudices and is based on the 2011 documentary series titled “Jamie: Drag Queen at 16,” which aired on BBC. Three K-pop singers — Jo Kwon, MJ and Ren — and actor Shin Joo-hyup are cast for the role of Jamie, while veteran musical actors such as Choi Jung-won, Kim Seon-young and Yoon Hee-seok will play supporting roles. The musical starts at 8 p.m. from Tuesdays to Thursdays; 3 p.m. and 8 p.m. on Fridays; and 2 p.m. and 6:30 p.m. on weekends and national holidays. There are no shows on Mondays. The musical is rated for those who are over 14. Ticket prices range from 60,000 won to 140,000 won.
Yeoksam Station, line No. 2, exit 7.