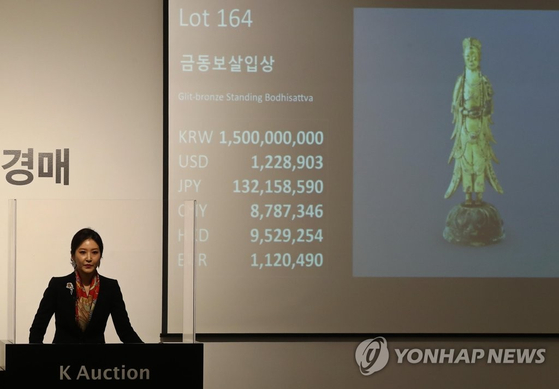 An auctioneer welcomes bids for Treasure No.285, Gilt-bronze Standing Bodhisattva, at K Auction in southern Seoul on Wednesday. [YONHAP]

The fate of the two treasures placed up for auction by the famous Kansong collector family is up in the air after they failed to attract any bidders on Wednesday.

No bids were made.

“We have no further information on what to do with the two treasures as of now,” an employee of the Kansong Art and Culture Foundation told the Korea JoongAng Daily on Thursday.

It was reported on the day of the auction that the National Museum of Korea may be negotiating with the Kansong family and K Auction about buying the treasures with some support from several private institutes.

“They are treasures of Korea, and it would be an honor for the museum to be able to preserve them,” the museum’s director Bae Ki-dong told the JoongAng Ilbo after the auction on Wednesday. “We will continue our discussions with the relevant parties.” 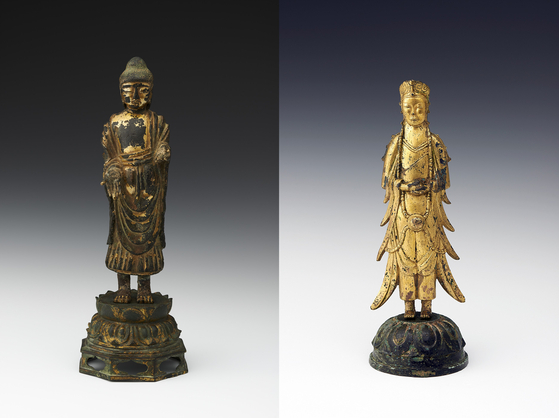 The decision to sell the treasures was a controversial one as the Kansong family, descendants of the famous collector Jeon Hyeong-pil (1906-62) whose pen name was Kansong, are known for their stalwart protection of high-profile treasures of Korea.


Jeon and his family collected over 5,000 artifacts, which include 12 national treasures including No. 70, Hunminjeongeum, also registered on Unesco’s Memory of the World list, and 32 treasures.

National treasures are deemed “of great importance for humanity and without parallel in human history” while treasures are defined as “important cultural heritage of Korea,” according to the Cultural Heritage Protection Act.

Korea has 331 national treasures and 2,064 treasures, according to the Cultural Heritage Administration.

The collected treasures are being managed by the family and the foundation that Jeon established in 1938, the Kansong Art and Culture Foundation.

The auction on Wednesday was the first time that the family had placed any treasure up for for sale.

The family had earlier told the JoongAng Ilbo that the controversial decision was reached due to financial struggles after Jeon's first son passed away in 2018.

Other examples of similar auctions include Treasure No. 1210 Buddhist Hanging Painting of Cheongnyangsan Mountain, which was sold at Seoul Auction in 2015 with the winning bid reaching 3.52 billion won, and No. 585 Manuscript of Yi Hwang and Song Si-yeol which sold for 3.4 billion won at K Auction in 2012.