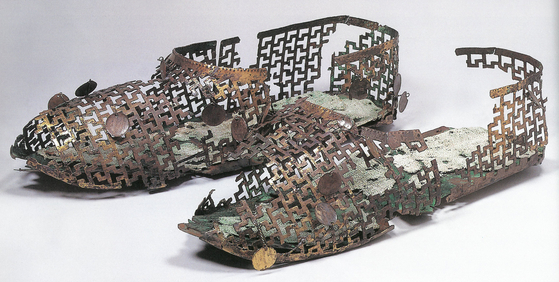 A pair of gilt-bronze shoes dating back to the Silla Dynasty excavated in Gyeongju, North Gyeongsang, in the 1970s. [CULTURAL HERITAGE ADMINISTRATION]

A pair of gilt-bronze shoes dating back to the Silla Dynasty (57 B.C. to A.D. 935) was unearthed in Gyeongju, North Gyeongsang, earlier in May, a first in 43 years since the last discovery of precious footwear in the ancient capital city of the dynasty.


“The pair of gilt-bronze shoes was found inside tomb No. 120-2, as part of the ongoing research in the region,” Kim Kwon-il, senior researcher of Foundation of Silla Cultural Heritage Research Institute, told a group of reporters at the site last Wednesday.

Just the tip of one shoe has been unearthed from tomb No. 120-2 in Gyeongju, located in Hwangnam-dong, a southern area of the city, while the second shoe remains buried, waiting to be exposed to the light for the first time in 1,500 years.

“They were likely worn by the person entombed, because they were found at the lower end of the coffin,” Kim said. “Our research tells us that the tomb was built in around the fifth or sixth century. In a month’s time we hope to have more information about the discovery as we continue our excavation work.”

Kim’s team was examining the tomb’s area as part of its regular preservation work in cooperation with the Cultural Heritage Administration when it happened upon the footwear at tomb No. 120-2 on May 15.

In addition to the pair of gilt-bronze shoes, the tomb yielded parts of what appear to be a gilt-bronze saddle and a bit as well as an iron for clothes.

The assortment of objects excavated speak to the status of the person entombed, Kim said.

“Usually, a tomb that holds a pair of gilt-bronze shoes would also hold crowns, gilt-bronze coffin ornaments, earrings, necklaces, bracelets and other ornaments,” Kim said. “These objects altogether meant that the person entombed was of high status, not necessarily of the royal family but someone close to it.”

The person entombed was adorned in the ornaments and shoes, according to the usual practices at the time, Kim said.

The last time a pair of gilt-bronze shoes was found in Gyeongju was in 1977, in a tomb in Inwang-dong. Gyeongju’s tombs have yielded 13 pairs gilt-bronze shoes, including the most recent discovery. 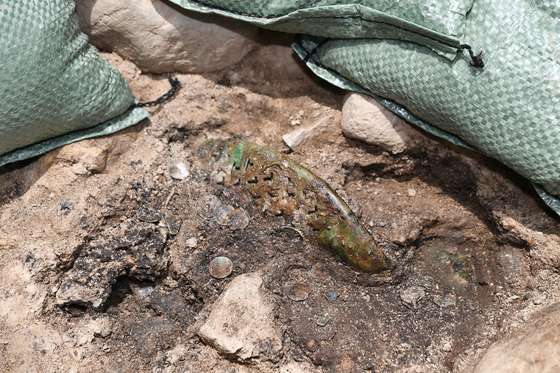 The tip of one gilt-bronze shoe surfacedduring a regular examination of tombs dating back to the Silla Dynasty (57 B.C.to A.D. 935) on May 15. [CULTURAL HERITAGE ADMINISTRATION]


Records from the Japanese occupation period (1910-1945) indicate that there are at least 155 tombs in Gyeongju dating back to the ancient kingdoms of Korea, some of which have yet to be discovered.

Houses were repeatedly built and brought down atop some of these areas where the ancient tombs are located, according to Kim, and many cannot be found on a map today.

As the excavation work continues, the research institute is likely to make more discoveries, Kim said. 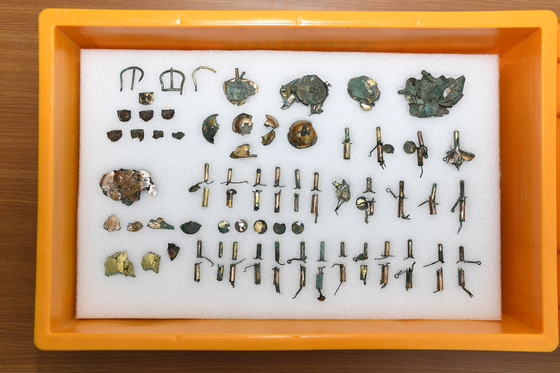 Parts of ornaments to what appears to have been a gilt-bronze saddle were excavated from tomb No. 120-2 in Gyeongju, North Gyeongsang, in May. [CULTURAL HERITAGE ADMINISTRATION]

Another noteworthy characteristic of the discovery, according to Kim’s team, was the type of soil used for tomb No. 120.

“A type of soil cement was used to build tomb No. 120, which can be brittle and for that reason has not been seen in other tombs,” Kim said.

“We will find out the reason the soil was used for entombment in the ancient kingdom.”

Silla, one of the three kingdoms of the Three Kingdoms of Korea (57 B.C. - A.D. 668), is well-known for its artistic and cultural freedom and achievements, as well as its broad international ties and deep Buddhist faith. It unified the three kingdoms in 668 and ruled until 935.