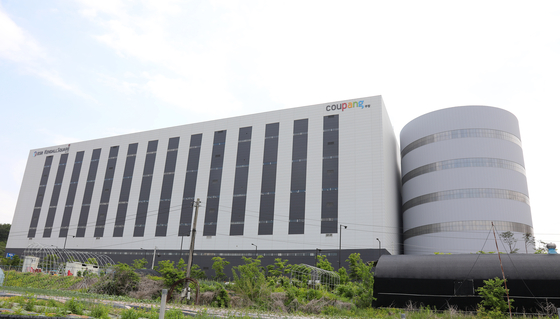 A Coupang distribution center in Goyang, Gyeonggi, where a worker tested positive for the coronavirus Wednesday evening. [YONHAP]

A second distribution center of the Korean e-commerce behemoth Coupang in Goyang, Gyeonggi, has been hit by the coronavirus with at least one worker testing positive, health officials announced Thursday.

Authorities said the infection seems to be connected to the growing cluster of Covid-19 cases in the first Coupang distribution center in Bucheon, Gyeonggi, which reached 82 patients by 11 a.m. Thursday, more than double the 36 patients reported by Wednesday morning.

Both Coupang distribution centers have been shut.

In Jung District, central Seoul, another Covid-19 cluster emerged Thursday when at least eight patients were traced to an office of KB Life Insurance. All eight workers worked on the seventh floor of the 17-story Central Place building near Chungjeongno Station on subway lines No. 2 and 5. The Korea Centers for Disease Control and Prevention (KCDC) called the office a call center in its official statement but the company insists it's an insurance agency branch.

The patient at the Coupang distribution center in Goyang, just north of Seoul, has been identified as a 28-year-old male who lives in Gyeyang District, Incheon, west of Seoul, and worked as an office clerk for Coupang at the Goyang center. Contact tracing results showed he had recently met a 19-year-old man who works at Coupang’s Bucheon distribution center before that employee tested positive for the coronavirus earlier this week.

The Goyang Coupang worker felt a fever on Tuesday afternoon and eventually tested positive Wednesday evening, after which he was hospitalized for treatment, officials said.

Epidemiologists are investigating precisely where and when the two Coupang workers met.

Some 500 people are known to have worked at the Goyang distribution center, and Goyang officials said Thursday everyone would be put through virus tests.

In Songpa District, southern Seoul, a coronavirus case at a logistics center of another online shopping company, Kurly, which was detected Wednesday, has yet to grow into a large cluster, but officials think the Kurly patient was connected to the Bucheon cluster as well.

The Kurly patient, who’s been identified as a 40-something-year-old woman living in Songpa District, worked for a Market Kurly distribution center run by Kurly for a single day last Sunday before she came down with symptoms of the coronavirus and got tested Monday.

According to Daejeon officials, the Market Kurly worker traveled to Daejeon by car last Saturday to attend a seminar on franchise selling of health products. She was accompanied by a 45-year-old woman from Guro District, western Seoul, who works for Coupang’s Bucheon distribution center and later tested positive for the coronavirus.

At least 194 people are believed to have attended the same seminar, including 52 people from Daejeon, seven from South Chungcheong, five from Sejong and three from North Chungcheong.

Health officials said every attendee was being contacted by their local government office to be tested, and that among those who received their test results so far, only one, a 51-year-old from Yeonsu District, Incheon, tested positive.

The Coupang cluster in Bucheon is believed to be linked to an earlier hot spot that emerged from nightclubs and bars in Itaewon-dong, central Seoul, on May 6, and more specifically to a sub-cluster centered on a 25-year-old private hagwon (cram school) teacher in Incheon. The instructor partied in an Itaewon club earlier this month, King Club, before coming down with Covid-19.

The photographer was hired to take photos of events taking place at a buffet restaurant in Bucheon on May 9, 10 and 17, and several people who attended those events came down with symptoms of Covid-19 — including an employee at Coupang’s Bucheon distribution center. 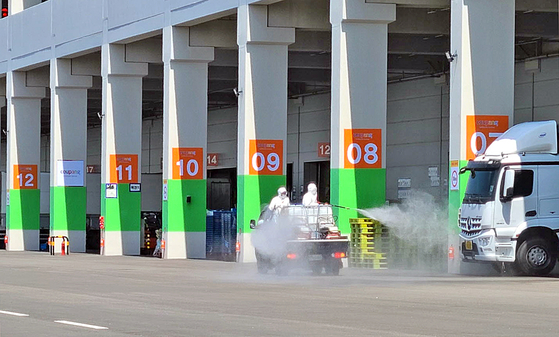 
As health authorities scramble to test more than 4,000 people linked to the Bucheon logistics center, including workers and their families, Vice Health Minister Kim Gang-lip said Thursday that one silver lining was that testing was going smoothly unlike in the Itaewon hot spot, when many clubgoers refused to show up because several clubs and bars named by health officials for possible transmission catered to the LGBTQ community.

By 9 a.m. on Thursday, Kim said 3,445 out of 4,159 people who were called for virus testing in regards to the Bucheon distribution center have been tested so far, which is about 82.8 percent, adding that the remainder would be tested by that night.

Kim also addressed online shoppers fearful of contracting the disease via their deliveries, saying chances are “extremely low” and not a single such case has been reported throughout the world.

In dealing with the new clusters, Health Minister Park Neung-hoo announced Thursday that public facilities in the Seoul metropolitan area — which includes Seoul, Incheon and Gyeonggi — will shut down again from Friday through June 14 to eliminate the possibility of virus transmissions, a measure that will affect various museums, arts theaters and parks.

Local government offices will also be forced to cancel or postpone events they had planned during that period, while government officials will be recommended to work on staggered schedules or telecommute.

The health minister said the Korean central government would maintain its current “everyday life infectious disease control” system for now, but warned it may return to previously implemented social distancing guidelines if the clusters continue to spread over the next two weeks.

The everyday disease control system was launched on May 6 as Korea’s central government triumphantly kicked off the country’s “new normal,” marking an end to six weeks of rigorous social distancing rules. 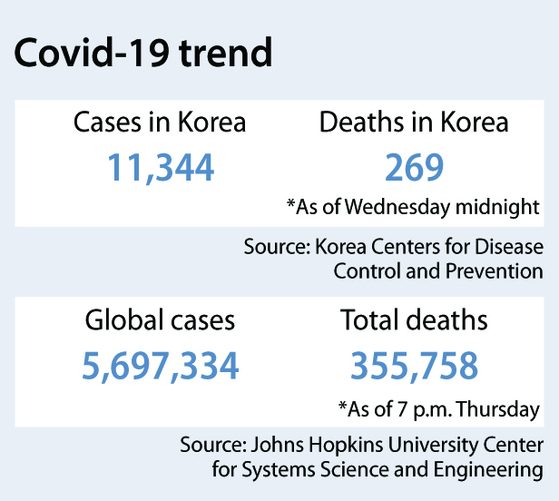 Korea added 79 new infections Wednesday, 11 of which were imported, bringing the country’s total case load to 11,344, according to data from the KCDC. By Wednesday midnight, 269 people had died, the same as the day before, while 10,340 people have been declared fully recovered, up by 45 from the previous day.

By Thursday noon, cases linked to the Itaewon cluster were 261, up by two from the previous day. Both people didn’t personally go to a club or bar in Itaewon recently but had contact with someone who did, the KCDC said. The Coupang cluster in Bucheon was not included in the Itaewon cluster figures.

Among 82 other patients in the Coupang Bucheon cluster counted by 11 a.m. on Thursday, 63 are or were workers at the distribution center, while 19 are people who had contact with them. Seventeen people live in Seoul, 27 in the surrounding province of Gyeonggi and 38 in Incheon.