Online retail’s first cluster may be linked to Itaewon infections 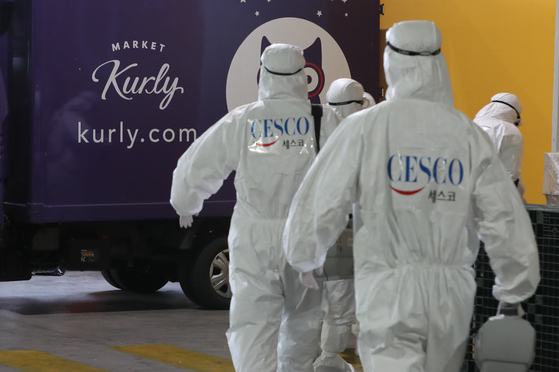 Disinfection workers head to a Market Kurly distribution center in Songpa District, southern Seoul, Wednesday, after the e-commerce company Kurly announced that an employee there has been infected with Covid-19. [NEWS1]

A new cluster of coronavirus infections at a distribution center of the e-commerce company Coupang surged to at least 36 patients by Wednesday, with health officials warning of more as contact tracing and Covid-19 testing continue.

Health authorities don’t know for sure how the virus penetrated the distribution center in Bucheon, Gyeonggi, just west of Seoul, but said the new cluster could have links to an earlier hot spot that emerged from nightclubs and bars in Itaewon-dong, central Seoul, on May 6. 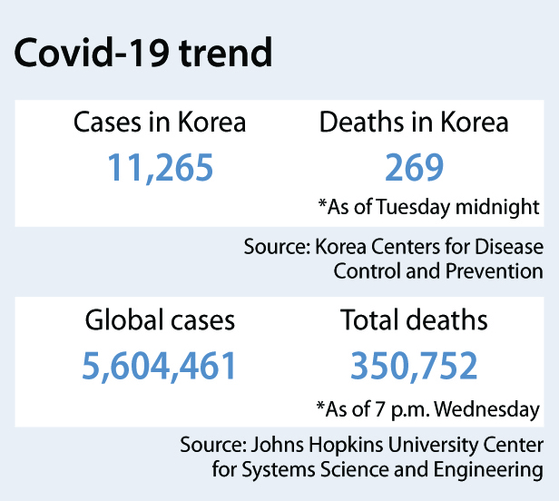 Specifically, the Coupang cluster could be connected to a sub-cluster of infections centered on a 25-year-old private hagwon (cram school) teacher in Incheon who partied in an Itaewon nightclub earlier this month and came down with Covid-19.

The first person to have been diagnosed with Covid-19 in the Coupang cluster was a 43-year-old female worker who lives in Bupyeong District, Incheon, which is near Bucheon. Officials said she visited a buffet restaurant in Bucheon on May 9 with her teenage son to attend an acquaintance’s birthday party, after which she went to work at the Coupang distribution center for several days before testing positive for Covid-19 last Saturday. Her son also tested positive.

That buffet restaurant, named Raon Buffet Party House, was visited by a 49-year-old taxi driver from Incheon who was infected by his 17-year-old son. The son visited Top Coin Noraebang on the second floor of the Vision Plaza building in Michuhol District, Incheon, earlier this month. The coin noraebang (a booth-type singing room) was previously visited by a 17-year-old high school student who contracted the coronavirus after attending the hagwon instructor’s class.

The taxi driver, who freelances as a photographer, visited Raon Buffet Party House on May 9, 10 and 17 after he was hired to take photos of events taking place there, and several people who attended those events recently came down with symptoms of Covid-19.

After the 43-year-old Coupang worker tested positive for the coronavirus last Saturday, another female worker in her 30s who lives in Bucheon tested positive on Sunday, and a man in his 30s in Incheon received his positive test results Monday, prompting health officials to start running virus tests on more than 3,000 people linked to the distribution center this week. The center is known to have mainly handled prepackaged fresh foods.

Officials said Wednesday that many patients in the Coupang cluster began exhibiting symptoms around last Saturday, although 20 percent were asymptomatic at the time they tested positive for the disease. The patients appeared to have spread the virus in the distribution center’s cafeteria, smoking areas, shuttle buses and work zones.

Among the 36 cases of infections linked to the Coupang distribution center, 32 are or were workers there, and four are their relatives, according to data from the Korea Centers for Disease Control and Prevention (KCDC).

Four people live in Seoul, 10 in the surrounding province of Gyeonggi and 22 in Incheon.

By Wednesday noon, other cases linked to the Itaewon cluster grew by four from Tuesday noon to reach 259. All four people didn’t personally go to a club or bar in Itaewon recently but had contact with someone who did.

Forty new Covid-19 cases were detected nationwide Tuesday, three of which were from abroad, bringing Korea’s total case load to 11,265. By Tuesday midnight, 269 people had died, the same as the day before, while 10,295 people have been declared fully recovered, up by 20 from the previous day.

Health officials said they’ve set up a makeshift Covid-19 testing center at Bucheon Stadium to test some 3,600 people with possible links to the Coupang cluster, including full-time and part-time workers for the company and those who recently quit. The Coupang distribution center in Bucheon has been shut down.

Kurly, another popular e-commerce company in Korea which runs Market Kurly, also announced Wednesday that one of its workers who worked a single day at a Market Kurly distribution center in Jangji-dong, Songpa District, southern Seoul, tested positive for the coronavirus that morning after working at the center last Sunday.

Whether the case is connected to the Coupang distribution center or the Itaewon cluster is yet unknown. Kurly said in a statement Wednesday that a section of the distribution center the worker worked in has been closed, and contact tracing was ongoing.

As for Korea’s two suspected cases of a new life-threatening pediatric inflammatory syndrome that local health officials mentioned Tuesday, authorities said Wednesday that both patients were in good shape and that one has already been discharged from the hospital, while the other will soon be.

They both tested negative for the coronavirus recently, and the KCDC said it would make further announcements on the cases next week after running antibody tests on the 11-year-old boy and 4-year-old girl, who both live in Seoul.

KCDC Director Jung Eun-kyeong said Wednesday in a press briefing that both children were treated with immunoglobulin therapy, which is normally used for treating Kawasaki disease, a rare illness in children that has been said to resemble the new inflammatory syndrome, known as pediatric multisystem inflammatory syndrome, or PMIS.