Former major league player Kang Jung-ho told his ex-KBO club Kiwoom Heroes on Thursday that he'd like to rejoin the team once his one-year suspension for drunk driving ends in 2021.

The Heroes said Kang reached out to their general manager Kim Chi-hyun earlier Thursday and expressed his desire to be reunited with the club. Kang is currently staying in the United States. 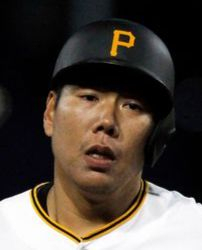 Kang, who left the Heroes to sign with the Pittsburgh Pirates in 2015, remains on the "voluntarily retired" list because he wasn't a free agent at the time of his departure. The Heroes still own rights to Kang, and they must first take Kang off that list before he can play in the KBO.

And based on his three prior drunk driving arrests, the KBO suspended Kang for one year and ordered him to do 300 hours of community service. The suspension will begin once Kang signs a KBO contract.

The ball is in the Heroes' hands. They said they will soon meet with Kang's agent in Seoul before deciding their next course of action. They can take Kang off the voluntarily retired list either to sign him themselves or make him a free agent. If the Heroes decide not to reinstate Kang, then he won't be able to sign with anyone else in the KBO.

Kang has repeatedly apologized for his past mishaps and has pledged to donate his salary to charity if he signs with a KBO club.

Drafted out of high school as a catcher, Kang carved out an All-Star career as shortstop for the Heroes. In his last season before moving to the majors, Kang established a new KBO record for most home runs in a season by a shortstop with 40.

Then in 2016, Kang posted a 0.513 slugging percentage while setting career highs with 21 home runs and 62 RBIs in 103 games. But following a drunk driving accident in December that year, Kang never duplicated that level of production.

He missed the entire 2017 season, as he was unable to get his work permit. He appeared in only three games in 2018 and then 65 games in 2019 before the Pirates released him.