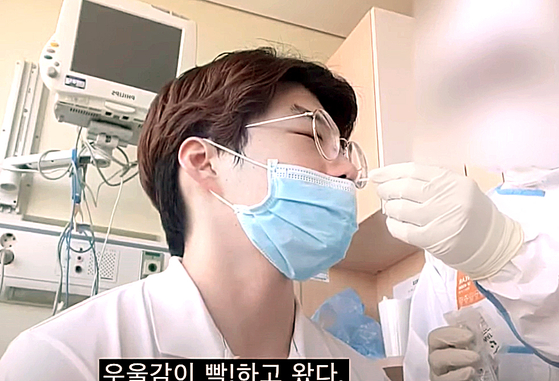 Lee Jeong-hwan, 25, undergoes a coronavirus swab test in his hospital room on May 14. [YOUTUBE SCREEN CAPTURE]


Lee Jeong-hwan returned to Korea from Istanbul on April 4. The next day he was hospitalized with the coronavirus.

He said it was brutal. For 10 days, he was racked by severe pain and believes he was close to death, high-fiving Korea's angel of death, jeoseungsaja.

Lee, who was until that point a healthy, carefree 25-year-old, has a word of advice for his peers. You are not invincible. Take the disease seriously.

For those who enjoy late nights at clubs and packing into tiny bars, he says it's time to ditch your delusions of immortality. The pain and danger of the coronavirus are all too real, he warns.

Everything started with a high temperature, which occurred a day after he tested positive. Then came the excruciating muscle pains.

In a phone interview with the JoongAng Ilbo, Lee said that, “when the symptoms flared up, my whole body ached, and I was only able to sleep an hour each day because of the pain.”

And that’s not the end of it.

The muscle pains were usually accompanied by a high fever of 39 degrees Celsius (102 degrees Fahrenheit) and coughing. This combination of symptoms lasted roughly 14 days.

He also experienced digestive issues, vomiting and diarrhea — side-effects from the medication, a common problem for patients.

“There were so many overlapping symptoms. I was in agony. I couldn’t properly eat food and drink water, so, naturally, I lost a noticeable amount of weight as well,” Lee said, “I became a skeleton of my former self.”

Having to deal with these symptoms in isolation, depression kicked in 33 days after Lee was admitted to the hospital.

Every three to four days, Lee would undergo 10 different diagnostic tests, one being a swab test that involves sampling mucus from deep within the nasal cavity, which many patients recall as feeling like "a stab in the brain."

He turned to his diary, writing in it whenever he started to feel lethargic or depressed.

Exercise helped. After he felt well enough to do so, roughly three weeks after the onset of symptoms, Lee made sure to do an hour of light exercise every day.

But at the beginning of May, just when he was starting to recover, Lee read some disturbing news.

It was about the Itaewon cluster. A 29-year-old Korean man from Yongin, Gyeonggi, tested positive for the coronavirus after visiting five different clubs and bars in Itaewon from 11 p.m. on May 1 to 4 a.m. on May 2.

Lee warned those who are not practicing social distancing measures, thinking that their youth would give them a free pass.

“I thought that the coronavirus was no big deal since I am in my 20s,” said Lee. “But when I actually got infected, I realized how painful, how life-threateningly painful, the virus actually was.”

Lee also emphasized that the younger people who consider the coronavirus as no big deal have to consider the harm they are doing to the people close to them.

“When I came down with the virus, I experienced first-hand the reality that older relatives and the elderly could die from the infection,” said Lee, adding younger people "must remember that lives are at stake here.”

Starting from May 3, Lee started filming a series of YouTube vlogs in his hospital room in order to explain the dangers of the coronavirus and reveal the daily life of a coronavirus patient.

Although he has made progress, Lee is still receiving treatment at the hospital to this day, as of May 26.

“I’ve never thought about death before I came down with the coronavirus, but I realize now that death is constantly just a stone’s throw away,” Lee said, emphasizing in the meanwhile that he must be sure to live his second shot at life to the fullest.

Making Itaewon: The evolution of Seoul's most diverse neighborhood