At least four nurses at Samsung Medical Center (SMC) in Gangnam District, southern Seoul, have contracted the coronavirus, health officials announced Tuesday, raising worries of a cluster at one of Korea’s largest hospitals.

The news came as the cluster of infections that started in nightclubs in the Itaewon section of central Seoul seemed to come under control, nearly two weeks after the first case was discovered.

By Tuesday noon, 187 Covid-19 patients were traced to the Itaewon cluster, up by seven from Monday noon. The figure is a significant drop from last week, when 20 to 30 new cases were being reported on an almost daily basis.

How the 29-year-old got infected is yet unknown. Health officials only said Tuesday that it appears the 29-year-old nurse didn’t visit Itaewon lately or have contact with anyone who did.

Medical staff and patients who had contact with the four nurses are going through virus tests. At least 277 people at the hospital were found to have had contact with the 29-year-old nurse — 262 medical professionals who either ate with her or had some other form of contact, and 15 patients.

Officials believe more people could come down with Covid-19 in light of the fact that the nurses participated in several surgeries. 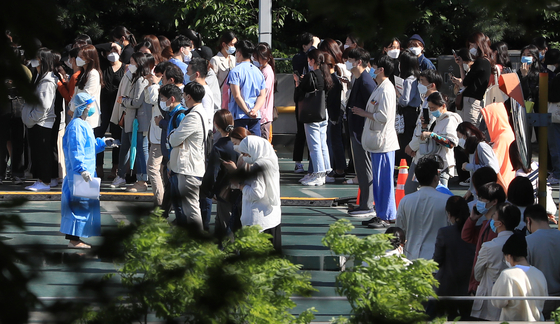 Medical professionals wait to be tested for the coronavirus Tuesday at Samsung Medical Center in Gangnam District, southern Seoul, after hearing that four nurses at the hospital got infected. Some surgery rooms were shut down and 60 to 70 planned surgeries postponed. [NEWS1]

“The fact that we have a cluster of infections at a large hospital with many patients that have critical illnesses and underlying conditions goes to show how extremely severe of a situation this is,” Park underscored Tuesday.

The Seoul Metropolitan Government said in a statement that the office has dispatched a team of 18 officials to the hospital to help control the outbreak. The Gangnam District Office, which jurisdiction includes SMC, said some surgery rooms and clinics on the third floor of the hospital’s main building, where the nurses frequented, have been tentatively shut down.

It’s the first time that a medical professional at one of Korea’s five largest hospitals, known here as “the big five,” contracted the coronavirus, though many doctors and nurses at small hospitals, clinics and nursing facilities for the elderly have become infected. By Tuesday, a total of 266 medical professionals in Korea, including the four nurses at SMC, contracted Covid-19, which accounts for about 2.4 percent of the nation’s total cases. Only one known doctor has died.

The SMC has a checkered history with virus outbreaks, as nearly half of Korea’s infections of the Middle East respiratory syndrome (MERS) in 2015 were traced specifically to the hospital and its emergency rooms. Among Korea’s 186 MERS patients, 90 infections were connected to the hospital, 75 of which were traced to its emergency rooms. At the time, the hospital faced severe criticism for delaying reports to health authorities about its list of suspected patients and the people that confirmed patients had contacted.

According to details from the Seoul Metropolitan Government and the SMC about the 29-year-old nurse, she participated in a surgery last Thursday and helped with triage the next day near a section of the hospital that leads to many surgery rooms.

Over the weekend, she didn’t go to work and felt symptoms of the coronavirus, including a fever. She was tested Monday morning and received her positive test result later that afternoon, after which she was transferred to a different hospital for Covid-19 treatment.

Across the nation, 13 people tested positive for the coronavirus Monday, four of whom represented imported cases, according to the Korea Centers for Disease Control and Prevention (KCDC). The country’s total case load now stands at 11,078.

By Monday midnight, 263 people had died, the same as the previous day, while 9,938 people have been declared fully recovered, up by 34 from the day before.

Of Korea’s total 11,078 patients, 1,181, or about 10.7 percent, contracted the coronavirus while overseas, KCDC data showed, mostly in the United States or Europe. 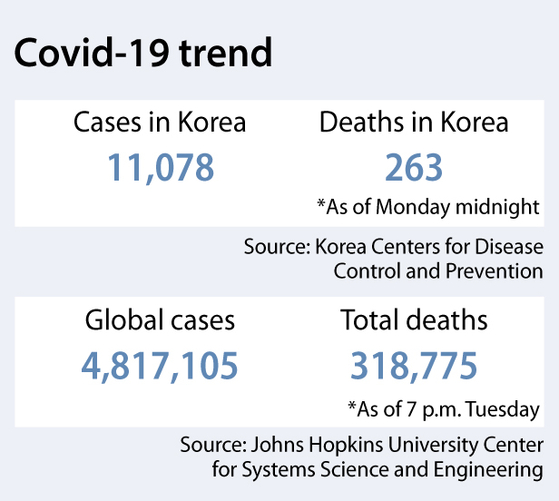 Infections traced to a 25-year-old Korean hagwon (cram school) instructor in Yonghyeon-dong, Michuhol District in Incheon — who visited King Club in Itaewon early this month and later lied to officials about his employment status — also rose to 22 Tuesday, up by five from the previous day.

A Chinese couple that rode in a taxi that was previously ridden by the hagwon instructor received their positive Covid-19 test results Tuesday, and so has the cab driver’s 4-year-old grandson. The driver tested positive on Sunday.

A 17-year-old high school student and his 46-year-old mother were also diagnosed Tuesday after visiting a so-called coin noraebang (singing room) in Michuhol District, which was visited by another high school student who got infected after attending the instructor’s class.

Meanwhile, Education Minister Yoo Eun-hye reaffirmed Tuesday that classes for high school seniors will officially launch Wednesday, reopening schools for the first time since the coronavirus outbreak swept the nation. Most schools were supposed to begin classes on March 2, but the government delayed the date several times and made schools offer online classes and learning materials to their students from April.

If everything goes as planned, high school seniors will go to school on Wednesday; 11th, ninth, first and second graders, as well as kindergarteners, will return to classes on May 27; 10th, eighth, third and fourth graders on June 3; and fifth, sixth and seventh graders on June 8. 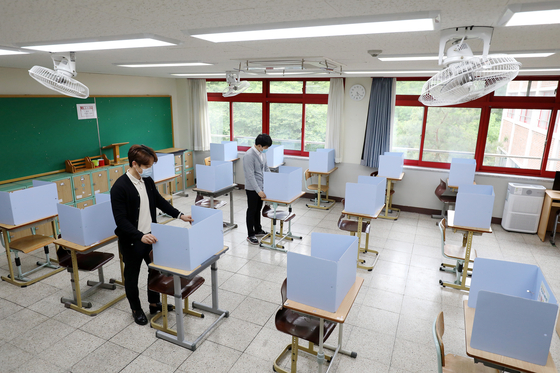 Teachers at Junghwa Girls' High School in Daegu set up shields on each desk Tuesday, a day before classes for high school seniors begin for the first time since the coronavirus outbreak. [NEWS1]

Local education offices and schools were given discretion to decide whether to require their students to come to school every day or run staggered schedules, allowing some to come to school while others learn through online materials.