Korean health authorities Tuesday reported two suspected cases of a new life-threatening pediatric inflammatory syndrome with possible links to the coronavirus, raising a new worry in a country that’s starting to reopen schools after flat-lining its curve of Covid-19 infections.

The so-called multisystem inflammatory syndrome in children (MIS-C), also known as pediatric multisystem inflammatory syndrome (PMIS), was first reported in Britain in late April, then in New York City in early May, when doctors there announced cases of young children being hospitalized for the unknown disease, with symptoms including a fever, rash, red eyes, muscle soreness and sharp abdominal pain, sometimes requiring intensive care.

At least four children who contracted the disease are known to have died — three in New York and one in Britain. New York Gov. Andrew M. Cuomo said that as of May 12, the state was investigating 102 cases of the syndrome. The New York Times reported that at least 14 other American states have detected cases as well.

The cause of the syndrome is unknown and whether it has any direct links to Covid-19 remains murky, but the World Health Organization (WHO) said on May 15 in a statement that the two seem to be “related.”

“Initial hypotheses are that this syndrome may be related to Covid-19 based on initial laboratory testing showing positive serology in a majority of patients,” the global health body said. “Children have been treated with anti-inflammatory treatment, including parenteral immunoglobulin and steroids.”

Korea didn’t report any such patients before Tuesday, but it wasn’t until Monday that the Korean central government’s Covid-19 command center announced a set of symptoms for PMIS to which hospitals should refer when reporting possible cases to authorities.

Kwon Jun-wook, deputy director of the Korea Centers for Disease Control and Prevention (KCDC), refused to get into details of the two suspected cases Tuesday when he stood in front of media cameras to break the news in a press briefing, only saying that two suspected cases were reported by that noon in Korea, one aged below 10 and another aged 10 or above, both living in Seoul.

“Investigations are still ongoing, so there’s nothing specific [to reveal] at this point in the process,” Kwak Jin, another KCDC official, said.

Kwon said one of the two cases didn’t perfectly match the command center’s definition of PMIS, without elaborating further.

According to the command center on Monday, a person must have all of the following symptoms or traits in order to be “defined” or recognized as a PMIS patient in Korea: aged 19 or under; a body temperature of 38 degrees Celsius (100.4 degrees Fahrenheit) or above and maintaining that fever for 24 consecutive hours or longer; laboratory evidence of inflammation; multi-organ dysfunction leading to critical illness requiring hospitalization; no other obvious microbial cause of inflammation; and evidence of Covid-19 infection or likely contact with a Covid-19 patient within four weeks prior to the manifestation of PMIS symptoms.

Korea’s preliminary definition of PMIS roughly matches that of the WHO. 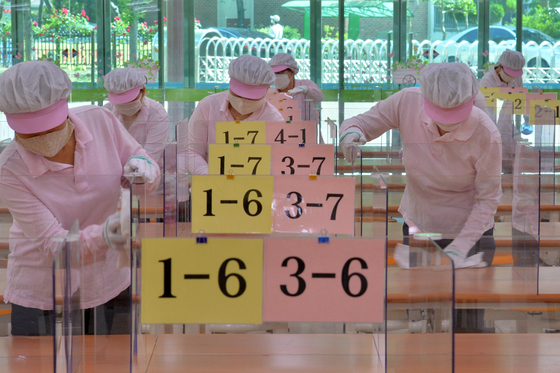 Cafeteria workers at Jigok Elementary School in Pohang, North Gyeongsang, wipe tables and plexiglass dividers Tuesday, a day before first and second graders return to school for the first time since the Covid-19 pandemic. [NEWS1]

The possible emergence of a new disease in Korea comes at a precarious time as schools prepare to reopen doors and start a new school year after daily new Covid-19 infections plummeted compared to February, when they peaked at three-digit figures.

High school seniors began going to school on May 20, and lower grades were about to follow in the coming weeks, with students of the second batch — kindergartens, first, second, ninth, and 11th grades — scheduled to start Wednesday.

Several schools in Seoul, North Gyeongsang and Bucheon, Gyeonggi, announced Tuesday they would postpone their starting dates after detecting some Covid-19 cases in their regions or schools recently.

In Seoul, at least eight elementary schools and four kindergartens in Gangseo District and Yangcheon District, western Seoul, and Eunpyeong District, northern Seoul, said they would delay their start dates by about a week.

In the southeastern province of North Gyeongsang, 181 schools in Gumi and a few other schools in Sangju said they would remain closed till the weekend after seeing several Covid-19 cases in the areas recently and amid fears the patients may have unwittingly spread the disease in their communities.

An elementary school in Bucheon said it would close Wednesday and Thursday after a teacher, who lives in Incheon, came down with Covid-19 Tuesday.

President Moon Jae-in urged education authorities in a cabinet meeting Tuesday at the Blue House to protect kids at schools from the coronavirus, stressing that school re-openings will be a litmus test in determining the success of the government’s ongoing “everyday life infectious disease control” system.

The system was launched on May 6 as Korea’s central government triumphantly kicked off everyday health guidelines for the country’s “new normal,” marking an end to its six weeks of rigorous social distancing rules. 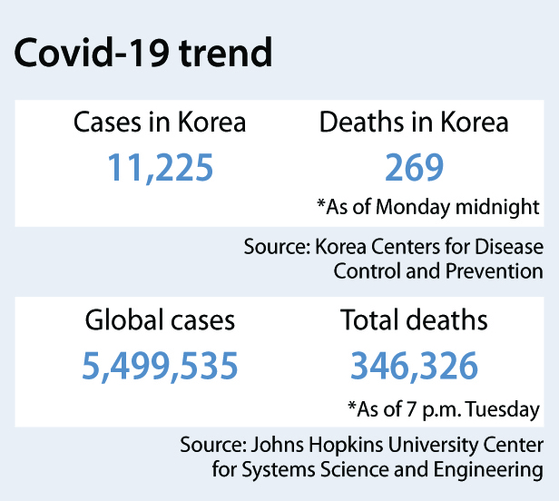 Korea added 19 new infections Monday, three of which were imported, bringing the country’s total case load to 11,225, according to data from the KCDC. By Monday midnight, 269 people had died, up by two from the day before, while 10,275 people have been declared fully recovered, up by 49 from the previous day.

The cluster linked to nightclubs and bars in Itaewon-dong, central Seoul, grew to 255 by Tuesday noon, up by 18 from Monday noon, all of whom were patients who didn’t personally go to a club or bar in Itaewon recently, but had contact with someone who did. 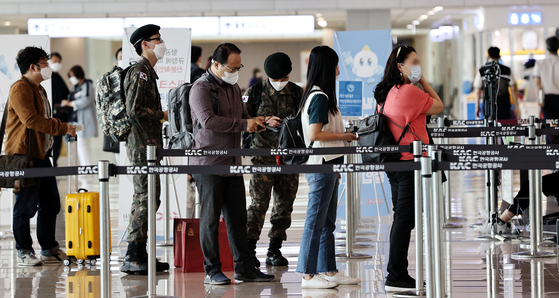 Passengers at Incheon International Airport queue up to board a flight while wearing masks Tuesday, a day before the Korean government’s order requiring all air travelers to wear face coverings goes into effect. [NEWS1]

A court in Uijeongbu, Gyeonggi, Tuesday, sentenced a 27-year-old Korean man to four months in prison for violating the government’s self-quarantine orders twice — once by leaving his home in Uijeongbu on April 14 and the second time by escaping a government-run quarantine facility in Yangju, Gyeonggi, two days later.

The convict never tested positive for the coronavirus, but he was told by officials to stay at his home for 14 days last month, the incubation period of the virus, due to possible contact with Covid-19 patients from a cluster in his city.