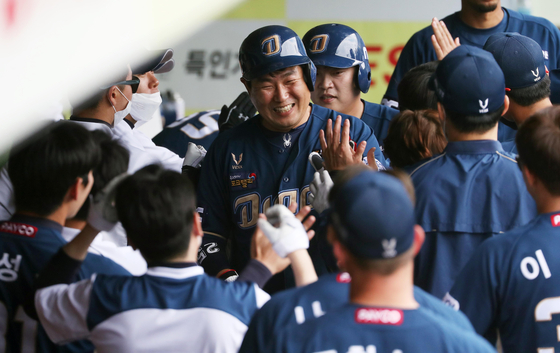 The NC Dinos celebrate after Yang Eui-ji, center, scores a run off Kim Tae-gun's RBI double during a game against the Samsung Lions at the Daegu Samsung Lions Park in Daegu on May 31. [YONHAP]

We may only be 23 or 24 games into the 2020 KBO season, but the NC Dinos have already set themselves apart at the top of the table.


Having played in 23 games as of Sunday, the Dinos have picked up 18 wins and only five losses with a 0.789 winning percentage. The Changwon club had a little skid at the start of the weekend, losing on Friday and Saturday, but came back strong with a big 18-7 victory against the Samsung Lions on Sunday.

Leading that charge are the Dinos' young pitchers. Statistically, the Dinos are third in the league at batting, with a team batting average at 0.296. But when it comes to pitching, the Dinos are in a league of their own. The team's ERA currently stands at 3.73, significantly lower than the second-ranked LG Twins, at 4.15.


Last year the Dinos' young pitchers looked like they might be the team's biggest weakness, with commentators praising veteran catcher Yang Eui-ji for holding the young side together on the mound. This year, that same young pitching staff has become the Dinos' biggest strength. 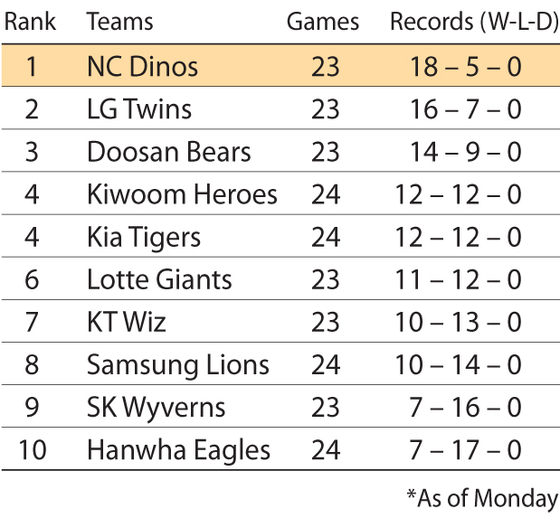 Koo Chang-mo’s performance stands out the most. During Sunday’s game, Koo was the Dinos starter, and throughout six scoreless innings, Koo only gave up one hit and a walk while striking out six.


By doing so, Koo picked up his fourth win of the season, after starting in just five games. Koo's season record currently stands at four wins, no losses with a no decision against the Doosan bears on May 20.

At bat, NC falls behind. Looking at individual statistics, Na Sung-bum is the only Dino topping a category, tied for first in runs with the KT Wiz's Mel Rojas Jr., at 21.

Over on the pitching tables, a Dino tops nearly every list.

Koo is having a remarkable year. He currently leads the league in ERA, at 0.51, and is tied in wins, at four, with Raul Alcantara of the Bears, and strikeouts, at 38, with Eric Jokisch of the Kiwoom Heroes.

Dinos closer Won Jong-hyan leads the league in saves at eight, while Park Jin-woo is tied for holds with his teammate Lim Jung-ho and the Wiz’s Ju Kwon, at six.


For the Dinos, this is an impressive achievement. The Changwon team only joined the KBO in the 2013 season, and since 2014 they've been considered one of the league's stronger teams. The Dinos have made it to the postseason every year they have been in the KBO, with the exception of 2013 and 2018, but have never once taken the title. Part of the problem in recent years has been an unreliable pitching staff.


Manager Lee Dong-wook, in his second season leading the club, seems to have found the right formula.

At the other end of the league, the SK Wyverns finally moved off bottom place with a four-game winning streak. The Wyverns, who were one of the most dominant teams over the last few years, are still not in the best position with a lot of their starting players injured. Despite the lack of well-known names on the entry last week, SK still managed to get the job done.


The Wyverns ended up fielding a team of unknown rookies and forgotten veterans. Among that unrecognizable squad was catcher Lee Heung-ryun, who was traded from the Bears last month. Lee has already proved his worth, hitting home runs in two straight games — on Saturday and Sunday — against the Hanwha Eagles. Along with the home runs, throughout four games, Lee managed four hits and four RBIs with a 0.444 batting average.

While the Wyverns have finally started to wake up, the Eagles seem to be going in the wrong direction as they are currently in an eight-game losing streak that has sent them tumbling back down to familiar territory at the bottom of the table with seven wins, 17 losses and a 0.292 winning percentage.

Starting Tuesday, the KBO will continue its season as the Twins host the Lions at Jamsil Baseball Stadium in southern Seoul. In Suwon, the Wiz will play a three-game series against the Bears while the Eagles will face the Heroes in Daejeon. Over in Gwangju, the Kia Tigers will play the Lotte Giants while the Dinos will host the Wyverns in Changwon.