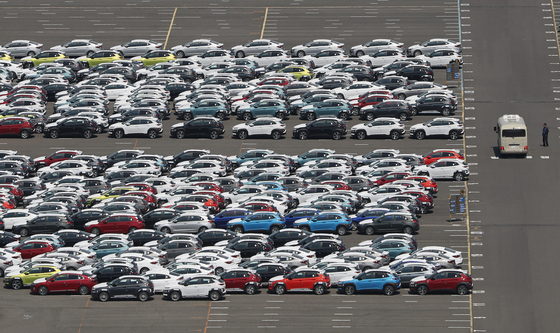 Hyundai Motor vehicles are ready to be exported at a dock in Ulsan in April. Korea's automobile exports continues to suffer as major markets including the United States are hit hard by the coronavirus pandemic. [YONHAP]

Korea’s exports fell 23.7 percent on-year in May as major trading partners including the United States have been heavily hit by the coronavirus pandemic.


Yet, despite the double-digit decline, the government interpreted the latest export report as positive, projecting that Korea’s exports will rebound once major trading partners including the United States recover.

According to the Ministry of Trade, Industry and Energy on Monday, exports last month shrunk 23.7 percent year-on-year to $34.9 billion.

One of Korea’s key export goods, automobiles, continued to suffer as its biggest export market is the United States.

As such, even automobile parts suppliers have been affected, falling 66.7 percent.

The decline of automobile and automotive parts exports was sharper than in April, when they fell 36.3 percent and 49.6 percent respectively.

That’s a sharper drop than in April, when exports fell 56.9 percent.

However, the decline was cushioned by the rise in semiconductor exports.

Gartner in March projected the semiconductor industry would shrink 0.9 percent from its earlier projection of 12.5 percent growth, while IHS Markit adjusted its growth from 5.5 percent to 2.5 percent.

Korea also saw significant growth in its biohealth exports, which grew 59.4 percent thanks to continuing demand for test kits and quarantine products amid the ongoing pandemic.

Despite the decline in exports, the government was positive as last month Korea reported a trade surplus, a turnaround in just a month from its first trade deficit in more than eight years in April.

In May, Korea reported a trade surplus of $440 million as imports shrunk 21.1 percent compared to the previous year to $34.4 billion.

The ministry said while imports have shrunk, inbound shipments of key materials including semiconductor manufacturing equipment, grew 9.1 percent, indicating that production in Korea is operating normally.

Minister Sung Yun-mo projected exports will recover soon as the current situation is not due to a structural problem in Korea, such as weakening competitiveness, but rather due to external factors.

“Once major economies including the United States and Europe recover, Korea’s export will get a boost,” Sung said, citing the latest recovery of exports to China, which are now at pre-coronavirus levels.

According to the ministry, exports to China only sank 2.8 percent to $10.7 billion. This is an improvement from the 17.9 percent decline in April.

However, other markets continued to suffer. Exports to the Unites States in May fell 29.3 percent, while Europe retreated 25 percent. Exports to Asean markets shrunk 30 percent.

The latest news on falling exports came on the heel of the Korean government adjusting its economic growth target for the year at 0.1 percent from the previous 2.4 percent.