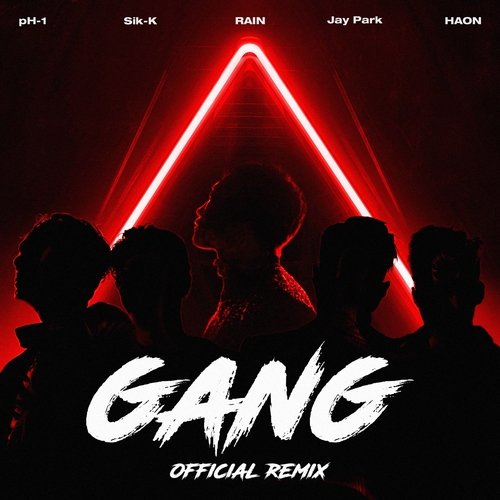 A remix of Rain’s 2017 song “Gang,” a collaboration between the singer and rappers Jay Park, HAON, pH-1 and Sik-K, reached the top of the local music charts within hours of its release Thursday.

The song, “Gang Official Remix,” was released Thursday at 6 p.m. By 11 p.m. it was the most listened-to song on music streaming service Melon. It also ranked No. 1 in the charts on Genie and Bugs as of Friday morning.

The remix was a collaboration between H1GHR Music, headed by Jay Park, and Sublime Artist Agency, Rain’s agency. It kept the original's signature beat, with new verses and melody performed by the rappers and Park.

The music video was uploaded on YouTube by H1GHR Music on Thursday. Rain himself appears near the end of the video to join the rappers.

Rain’s song “Gang,” which is pronounced “kkang” in Korean, went viral after a high school girl uploaded a dance cover of “Gang” on her YouTube channel last November, imitating Rain’s original choreography while dressed in costume. Others copied her video, giving birth to memes that poke fun at the narcissistic lyrics of the song and out-of-style dance moves.

The newfound popularity led to the music video of "Gang” reaching more than 13 million views on YouTube as of Friday, as well as more than 100,000 comments.

Jay Park and Spray to release 'Showdown' on Friday