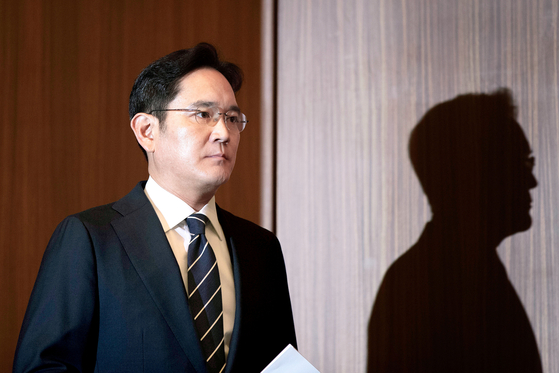 Samsung Electronics on Sunday appealed to the press not to release "groundless" or "speculative" reports centering on Samsung’s de facto leader Lee Jae-yong, who is being questioned over possible legal violations in the controversial 2015 merger of two affiliates and an accounting fraud to cement his control over the group.


The appeal, which also highlighted Samsung's contribution to the Korean economy, came a day before the court holds a hearing Monday to decide whether to issue the arrest warrant. Prosecutors on Thursday requested a warrant to detain Lee after he, along with other Samsung executives, requested that prosecutors convene a panel of outside experts to decide the validity of the investigation.

“Samsung is in a crisis,” said the statement Sunday. “Recently, press reports that haven’t been confirmed or those based on suspicious sources continue to be released. Some of them are based on the premise Lee is guilty. Please refrain from immoderate reports that aren’t based on the truth. The damage imposed on Samsung, its executives and staff members from those reports is not small.”


Lee, along with his two key aides — former senior executives Choi Gee-sung and Kim Jong-joong, of Samsung’s now dismantled Future Strategy Office — are suspected of violating the Capital Market Act and the Act on External Audit of Stock Companies during the merger of Samsung C&T and Cheil Industries, along with a case of suspected accounting fraud at Cheil affiliate Samsung Biologics.

“Despite the ongoing investigation that is taking place based on legal procedures, [the prosecution] requested an arrest warrant against [Samsung Electronics] Vice Chairman Lee and former and current executives,” wrote Samsung.

The company said the merger of Samsung C&T and Cheil Industries was legal in compliance with relevant regulations and procedures. It also said that the accounting fraud at Samsung BioLogics was “correctly processed based on international accounting standards.”

The statement stressed the significance of its role in combating the negative impact of Covid-19 on the Korean economy.

“The [incorrect] reports could not only distort the objective judicial judgement, but are definitely not desirable for Samsung as well as the future of our economy.” the statement said.” As Covid-19 continues, we have not got the slightest idea of what will happen to our economy. Samsung, which should be the key to overcoming the situation, is in fact causing concern to the people as it faces a management crisis.”

The statement asked that people let it play its role in contributing to the recovery of the Korean economy.

“Please open up the path [for Samsung] to be able to focus on achieving a new leap for the Korean economy through the normalization of Samsung’s management.”

In 2017, Lee was arrested for allegedly offering bribes related to the controversial merger. He spent a year in prison before being released on appeal.