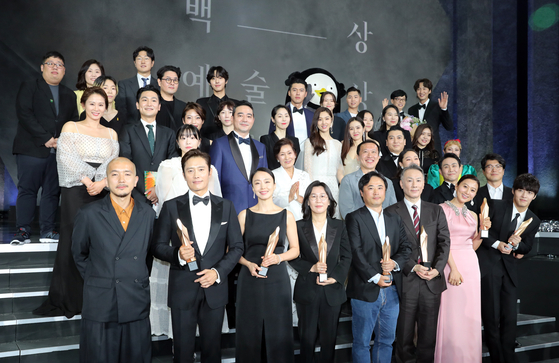 Winners of the 56th Baeksang Arts Awards from the television, film and theater divisions pose for the camera with their trophies on Friday at Kintex in Goyang, Gyeonggi. [ILGAN SPORTS]


Director Bong Joon-ho’s “Parasite” and the KBS drama series “When the Camellia Blooms” were the stars of the night at this year’s Baeksang Arts Awards.

The 56th Baeksang Arts Awards, organized by JTBC Plus and Ilgan Sports, took place on Friday evening at Kintex in Goyang, Gyeonggi and was aired live on JTBC. The annual ceremony awarded content released or aired on public broadcasters, cable channels and OTT (Over-The-Top) platforms from April 1, 2019 to April 30, 2020.

The Grand Prize from the television division went to “When the Camellia Blooms.” 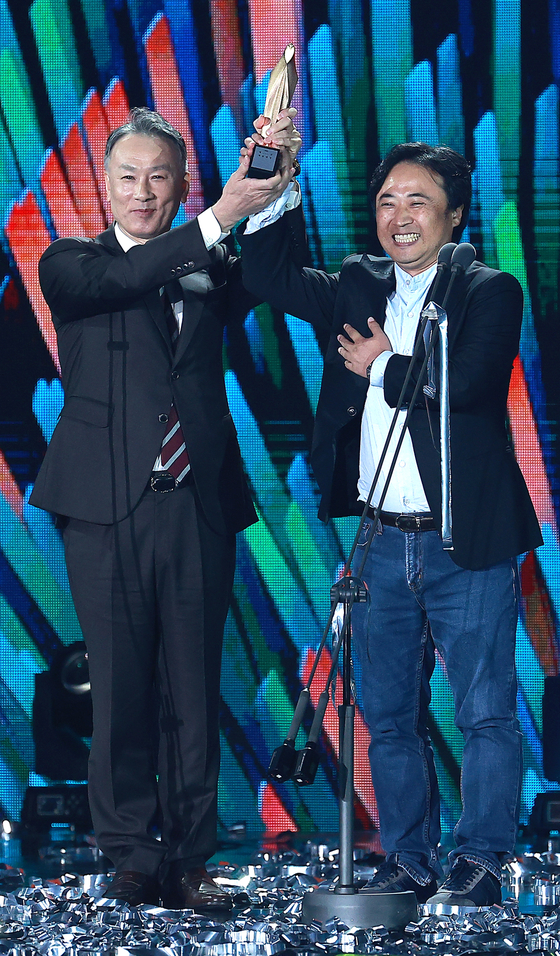 Vice president of the Pan Entertainment drama production company, left, and producer Yoon Jae-hyuk hold out their trophy in victory after their drama series "When the Camellia Blooms" received the Grand Prize.


“I would like to express the deepest gratitude to our viewers,” producer Yoon Jae-hyuk said. “I would also like to thank our writer Im Sang-chun who created this beautiful world ‘When the Camellia Blooms.’ And those who filled up this world — director Cha Young-hun, actors Kong Hyo-jin, Kang Ha-neul, and rest of our actors and staff. Our story was not about those in the spotlight. They seem ordinary, but we wanted to show that each of them were doing their best to lead their own precious lives. Right now Korea is going through a tough period, but I hope that like our series, a miracle could happen to all of us who are living every day to our fullest.”

“Parasite” wrapped up its year-long showering of accolades with its name being called up as the Grand Prize for the film division. On behalf of director Bong Joon-ho, the cast and staff of “Parasite” took to the stage to accept the award.

Producer Kwak Sin-ae and the team of "Parasite" filled up the stage to receive the Grand Prize for their film "Parasite" on behalf of director Bong Joon-ho. [ILGAN SPORTS]


“It’s a great honor to end the journey that began at Cannes last May at the Baeksang Awards,” producer Kwak Sin-ae said. “It has been a passionate year. For our team, we’ve been together for two and a half years, and overall, it has taken seven years to complete this film that began in 2013. Films will continue [despite the coronavirus pandemic]. The day will come soon when we can all meet in the theaters packed with audiences.”

For the rest of the film division, Best Actor and Best Actress awards respectively went to Lee Byung-hun from “The Man Standing Next” and “Birthday.” Director Kim Bo-ra was given Best Director for her film “House of Hummingbird” and director Kim Do-young received Best New Director award for her film “Kim Ji- young, Born 1982.” Director Lee Sang-geun received Best Screenplay for his film “Exit.”

From this year, a theater division was established. Director Shin Yoo-chung became the first winner of the Baeksang Play Award for his play “Incendies,” adapted from 2003 production by Wajdi Mouawad. The story follows the journey of twins Jeanne and Simon on a mission given by their mother Nawal on her deathbed. It covers social issues related to war, refugees and women.

Best Actor and Best Actress were respectively given to Baek Seok-kwang from “Wife” and Kim Jung from “Rotterdam.”

Due to the coronavirus pandemic, this year’s ceremony was held without an audience. For the third consecutive year, it was hosted by comedian Shin Dong-yup and actors Park Bo-gum and Suzy.