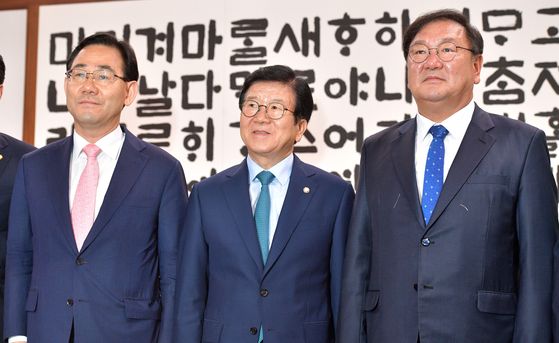 The ruling and opposition parties on Monday agreed to create a special panel of lawmakers to determine the makeup of the National Assembly's standing committees — but not the committee chairs, an issue that weeks of negotiations have failed to resolve.

Since late May, the two parties have been debating how to structure the legislature, which formally began its new four-year term on May 30. But no progress has been made, with the DP insisting it will chair all 18 standing committees, based on its overwhelming majority. The party controls 177 of the 300 seats in the Assembly, while the UFP controls 103.

The UFP has argued that the National Assembly must respect the long-standing tradition of splitting the chairman posts proportionally to the number of lawmakers each party has. Their proposal calls for the DP chairing 11 committees and the UFP chairing seven, including the powerful Legislation and Judiciary Committee.

Amid the ongoing deadlock, National Assembly Speaker Park Byeong-seug hosted a meeting between the floor leaders from the two parties Monday afternoon. During the meeting, Park and the DP’s floor leader, Rep. Kim Tae-nyeon, accepted the proposal from UFP floor leader Rep. Joo Ho-young, under which the lawmakers must introduce a new rule to change the number of lawmakers each standing committee has.

To that end, the ruling and opposition parties agreed to form an 11-member special committee to allocate a new quota of lawmakers from the parties to be assigned to each committee. The committee will comprise six DP members and four from the UFP. Speaker Park will recommend one lawmaker from neither of the two top parties.

The National Assembly will hold a session on Wednesday to approve the new quotas for standing committees.

The ruling and opposition parties also agreed to continue their negotiation over who will chair standing committees, including the Legislation and Judiciary Committee. The final gatekeeper of all bills before they head to a voting session, the committee has traditionally been headed by the main opposition party.

Han Min-su, chief public affairs officer of the National Assembly, said Monday that a determination of who will chair each committee will be postponed until after the new rule on the standing committee members is passed and lawmakers are assigned.