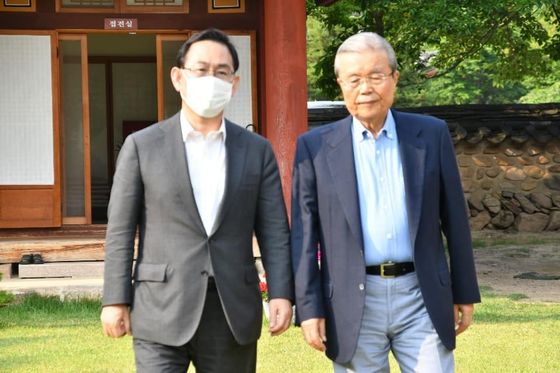 Acting Chairman of the main opposition United Future Party Kim Chong-in, right, meets with Rep. Joo Ho-young, floor leader of the party, on Saturday to urge him to return as the chief negotiator. Joo expressed his intention to step down after the ruling Democratic Party used its majority to start forming the standing committees last week. [YONHAP]

As opposition lawmakers continue their boycott of the Democratic Party-controlled National Assembly, talks resumed Monday to resolve the issue of who will chair a dozen legislative committees, but failed to make progress.

The main opposition United Future Party (UFP) has been boycotting the National Assembly since the Democratic Party (DP) used its majority to form six key standing committees and elect their chairs last week. In protest, Rep. Joo Ho-young of the UFP said he was stepping down from the floor leader post.

Joo remained outside Seoul over the past week, but decided to resume his job this week.

The UFP is particularly upset with the DP for ending a decades-long tradition that a senior lawmaker of the largest opposition party occupies the chair of the powerful Legislation and Judiciary Committee, the final gatekeeper of all bills before they are voted on.

DP Rep. Yun Ho-jung was elected June 15 to chair the committee, and the UFP demanded the election be void if the ruling party wants its lawmakers to end the boycott.

The DP said it will allow the UFP to chair up to seven committees, including the Special Committee on Budget and Accounts. Joo, however, continued to reject the offer.

According to UFP sources, some first-term lawmakers met with Joo on Sunday and asked him to return.

“Even if the DP will end up heading all 18 committees, the first-term lawmakers must not feel defeated and work hard,” one of the lawmakers quoted Joo as saying.

Acting Chairman of the UFP, Kim Chong-in, also met with Joo on Saturday.

“There will be no more negotiation with the DP,” Kim said. “They broke the time-honored tradition, so we will go our own way.”

On Monday, deputy floor leaders of the DP and the UFP resumed talks, but no deal was reached. Rep. Kim Young-jin of the DP and Rep. Kim Sung-won of the UFP attended the meeting.

While the DP proposed that the UFP will chair seven committees and hold elections to formalize the arrangement, the UFP turned it down.

“I told him it is unacceptable,” said Kim Sung-won. “It is the party’s position that the DP should just go ahead and chair all 18 committees.”

He also said National Assembly Speaker Park Byeong-seug must issue an apology for having assigned 45 UFP lawmakers to six committees last week, despite not receiving applications from them. The lawmakers subsequently resigned en masse from the committees, condemning the speaker for abusing his power.

“It is the UFP’s official position that the DP should monopolize all standing committees and bring dictatorship to the legislature,” Kim said. “Negotiations no longer have a meaning. Now is not a time for talks. It is a time for a bold decision.”