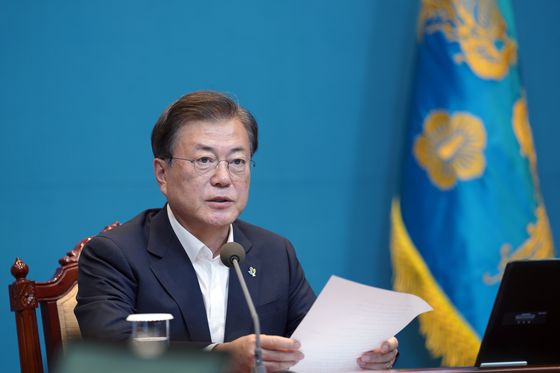 President Moon Jae-in speaks at a meeting with senior aides at the Blue House on Monday, urging to strengthen transparency in the use of donations of civic organizations and stressing the need to continue on with the movement to seek justice for victims of wartime sexual slavery. [YONHAP]

Breaking his silence on the ongoing controversy surrounding a group dedicated to the cause of the victims of Japan's wartime sexual slavery, President Moon Jae-in on Monday called for strengthening the financial transparency of such civic organizations.


But, Moon also stressed his belief in the broader legitimacy of the three-decades-long movement in support of so-called comfort women during a meeting with his top aides at the Blue House.

“This controversy can become an opportunity to look back at the method and manner in which activities of civic organizations are conducted,” said Moon. “However, it is not right to deny or damage the cause of the comfort women movement,” he added, noting that this will "diminish the dignity and honor” of the wartime sexual slavery victims.

Allegations against the Korean Council for Justice and Remembrance for the Issues of Military Sexual Slavery by Japan snowballed after Lee Yong-soo, a comfort woman survivor, through a press conference on May 7 questioned the financial transparency and the integrity of the civic group and its former head, Yoon Mee-hyang.

Moon's comments came one day after news broke that the head of a shelter that the Korean Council operated for comfort women survivors was found dead in an apparent suicide at her home on Saturday.

The movement to seek justice for the tens of thousands of girls and young women forced into sexual slavery by the Japanese military before and during World War II, euphemistically referred to as comfort women, began in the early 1990s after some of the survivors spoke publicly about their experiences, starting with rights activist Kim Hak-sun.

“The comfort women movement holds a 30-year history and is a step toward protecting the dignity of humankind, women’s rights and peace,” said Moon. “The cause of realizing the universal values of mankind should not be damaged.”

Moon recognized Lee’s role as an activist who has helped raise global awareness about the comfort women issue.

Moon then called for an integrated system to strengthen the financial transparency and management of donations of civic organizations.

Prosecutors launched an investigation into the Korean Council last month following allegations that the group had engaged in accounting fraud and had misused donations. Investigators raided the shelter, Peaceful Our Home, in Mapo District, western Seoul, along with the Korean Council's office and an affiliated museum on May 21 and 22.

In two separate press conferences in May, Lee Yong-soo accused the Korean Council and Yoon of exploiting the comfort women victims and questioned its use of donations. Yoon was elected as a proportional lawmaker of the ruling Democratic Party in April and kicked off her four-year term at the end of last month.

The Korean Council and Yoon have rejected most of the accusations.

Sohn Young-mi , the head of Peaceful Our Home, was found dead by police on Saturday at 10:35 p.m. in the bathroom of her fourth-floor apartment in Paju, Gyeonggi. She was 60 years old.

A former colleague had called authorities earlier that afternoon to report that Sohn could not be reached, leading to the police search.

Sohn is seen to have died from suffocation due to pressure to her respiratory tract, and there had been traces of self-inflicted injuries on her wrist and body, according to police Monday. They did not offer any further specifics.

Following a Monday autopsy observed by her family members and lawyers, the National Forensic Service concluded in a preliminary analysis that there was no suspicious external force involved in Sohn’s death.

Sohn does not appear to have left a suicide note. Camera footage captured her entering her apartment, where she lived alone, on Saturday at 10:57 a.m., the last time she was seen outside her residence.

"Since Sohn’s death is a societal issue, we decided to undergo an autopsy in order to leave no room for suspicion in the future," a police official said.

Digital forensic investigators are examining her mobile phone, police said, with the results of their investigation to be released as early as Tuesday. Police are also checking on whether Sohn created anything that could be construed as a suicide note.

Korean Council President Lee Na-young said in a statement Sunday that Sohn had been “psychologically in a difficult situation” following the raid of the Mapo shelter and had felt as if her existence had been “negated.”

In a statement Sunday, the Seoul Western District Prosecutors’ Office expressed its condolences but denied that prosecutors had questioned Sohn and added that they had not summoned her.

Sohn had worked with the Korean Council since 2004, around the time she met Yoon.

Yoon left a statement on her Facebook Sunday recollecting the 20 years she had known Sohn, and writing that she didn’t think they would be “living this sort of nightmare.”

She went on to recall a recent phone conversation in which Sohn told her, “My soul has been crushed. It’s difficult.”

Yoon wrote, “I was only thinking of my blood running dry, and didn’t see that [Sohn’s] blood was running dry too.”

Sohn’s body was transported to Severance Hospital in Sinchon-dong, western Seoul, immediately after the autopsy concluded Monday. Her wake will be held there for three days.

Sohn’s memorial altar was to be closed off to the media and public.

Yoon is expected to spend the next several days at the wake. There is interest in whether Yoon will cross paths with any comfort women survivors that attend Sohn’s funeral. 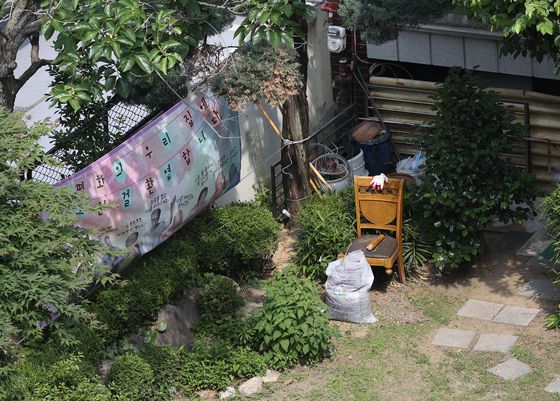 A silence rests over Peaceful Our Home, a shelter for Japanese wartime sexual slavery survivors run by the Korean Council in Mapo District, western Seoul, Monday, after the death of its former head on Saturday. [YONHAP]