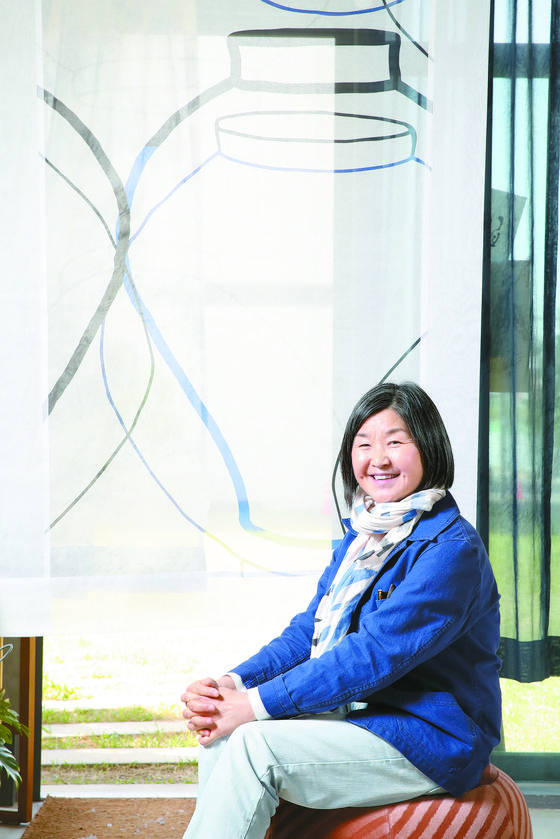 It was around this time of the year when the days began to get longer that Korean grandmothers would rummage through their attics to find bamboo curtains to hang in a bid to keep the sweltering summer heat at bay.


While these bamboo curtains are no longer widely used, textile designer Chang Eung-bok wants to carry on the legacy of these grandmothers by reinterpreting the tradition.

The 71-year-old designer came up with a series of panel curtains as alternatives to the bamboo ones. The simple curtains with images of traditional Korean crafts block out the sun while adding an elegant touch to any space.

Some of the curtains Chang designed use jogakbo or traditional Korean patchwork made using scraps of cloth but the colors of the fabric are toned down in accordance with today’s interior trends.

The prints and patterns Chang created are all inspired by the past but take on a new lease of life to become products that are convenient for the needs of today. 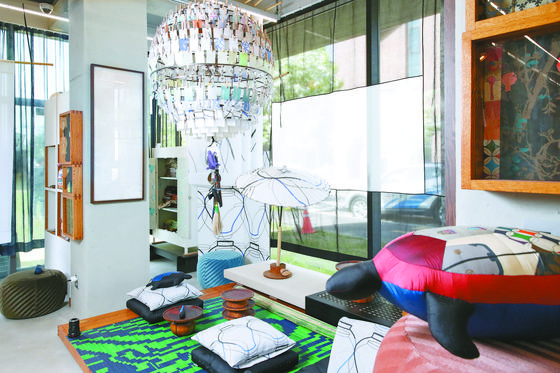 Chang’s studio Mono Collection located in Paju, Gyeonggi is decked out with various fabric products from sofas to stuffed toys. All the patterns and prints are inspired by traditional crafts. [WOO SANG-JO]

A triangle-shaped cushion is a good example. The cushion, a collaborative project between Chang and furniture designer Ha Ji-hoon, helps people sit more comfortably on the floor. The cushion is designed by Ha while the fabric of the cover, which has jars printed on it, is Chang's creation.

Chang is often dubbed a designer with an in-depth knowledge of Korean traditions and is credited for successfully connecting the past with the present.

Her fabric products are considered necessities for those who want to add natural and traditional vibes to their personal spaces.

When the JoongAng Ilbo visited her studio Mono Collection, located in Paju, Gyeonggi, last month, many different panel curtains were hung on display. While each one consisted of different colors and patterns, together they made a good combination. 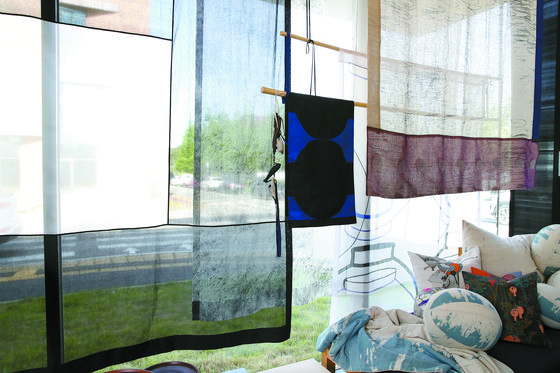 
Mono Collection is also the name of Chang’s textile brand.

“They are simple but they don’t seem to be outdated. They also jazz up your space as if you hung a piece of artwork on the wall,” said Chang.

Chang targets consumers with a wide scope of products from curtains to comforters to sofas to wallpapers and even small stuffed toys.

Each product has its own story to tell.

Chang's stuffed toys, for instance, are made with left-over fabrics and are designed to practice zero-waste. 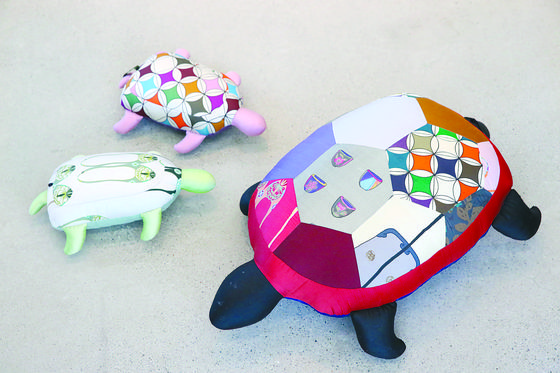 
When asked to define Korean beauty, Chang said, “It is frugal yet affluent.”

To put it another way, Korean beauty is simplistic and understated.

After graduating from Hongik University with a major in textile art, she landed a job at a textile design company.

Years later, she launched her own textile business in 1986 with the goal of taking part in Heimtextil, the biggest international fair for home textiles held in Berlin with her own creations.

While Chang reached this goal in 2000, the achievement did not come with the sense of fulfillment she had anticipated.

“I realized my products didn’t represent my own identity. Since then, I began to delve into patterns and prints that contain Korean sentiments in them.”


Chang's love for tradition runs in her blood. Her mother, who was a cousin of the famous Kansong collector family, was skilled at making the traditional head adornments that are worn with hanbok (traditional Korean clothing).

Growing up in hanoks, traditional homes, located in Seongbuk-dong and Jeongneung-dong, central Seoul, Chang was accustomed to the slower-paced, old-fashioned lifestyle. Her experience became a great asset to her.

Chang’s creations are mostly based on three themes: sansu, dowonmong and dam.

Sansu literally means mountain and water. But it also means nature or landscape.

Dowonmong comes from the painting entitled “Mongyudowondo” (1447) drawn by An Gyeon during the Joseon Dynasty (1392-1910). It is a painting of an imaginary landscape.

Dam is derived from traditional black and white painting.

Based on the three concepts, Chang draws inspiration for her creations.

Kim Hong-hee, the former director of the Seoul Museum of Art, once told the media that Chang learned all the techniques she needed for her work with traditional art. She discovers the beauty of the nature through traditional sansu paintings. She learned how to use colors and compose a drawing from folklore paintings such as hwajodo (paintings of birds and flowers) or sipjangsaengdo (paintings of 10 symbols for longevity).

Chang closely observed everyday objects used in the past, such as paper fans or embroidered shoes, and developed patterns based on her imagination, according to Kim.

Chang’s book “Mooni,” published in 2017, contains about 40 of her original patterns.

These days, her focus is on guardians of the past. 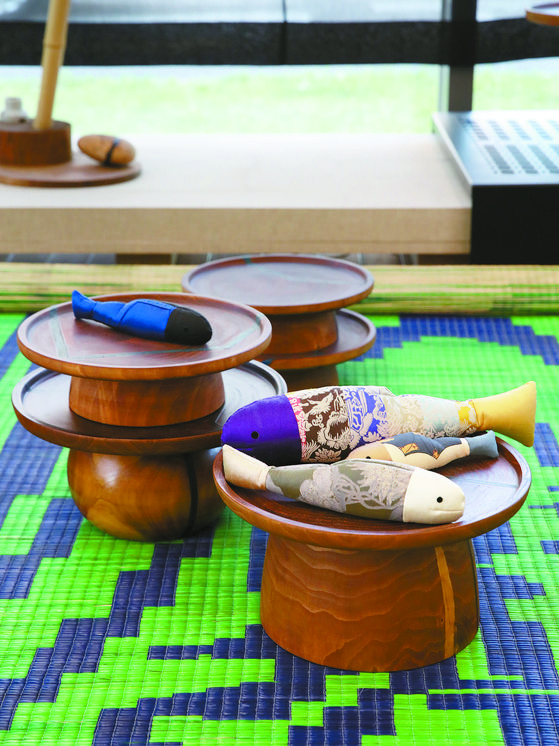 
The designer previously renovated Sangchunjae, a reception room, at the Blue House in 2017 prior to the arrival of U.S. President Donald Trump.

While stripping away old varnish from the floor at Sangchunjae to dab ottchil or traditional lacquer, she came across the original patterns made from the zelkova tree, which was the main material for the floor. Chang said she was amazed by the patterns created by nature.

It was this renovation work that she began focusing her work on the theme of guardians.

The zelkova tree is one of the guardians she wants to address through her work.

“Any neighborhood [in Korea] used to have a zelkova tree in one corner of their village. The tree was there to hear many people’s stories and wishes. The tree went through ups and downs with those people,” said Chang.

“We have a lot of mountains in the country. We believe each mountain has a guardian which keeps us safe from evil. Under the theme of guardians, I reconstruct trees and the nature of Korea into patterns.”

In the past, Chang used to draw specific objects such as embroidered shoes or white porcelain in her patterns and prints but now she prefers abstract images using mostly colors and lines.

Her aim in doing so is to bring traditional sentiments of Korea to modern homes as patterns and prints.

In order to achieve that goal, Mono Collection not only produces customized products but also systematizes some production procedures so that customers can easily access a lot more products at affordable prices.

“Pattern is a language made with symbolic images. Just like an amulet which is believed to ward off evil spirits, patterns change the energy of certain space and gives off good energy, too,” said Chang.

“I hope I can represent Korean sentiments well. I want to enrich people’s everyday life with my creations.”