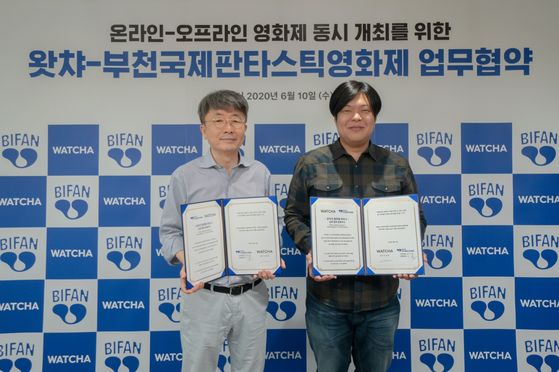 
Bucheon International Fantastic Film Festival (Bifan) signed a contract with local streaming platform Watcha to hold both an online and offline event in the midst of the coronavirus pandemic, the festival announced on Thursday.


According to the contract, Bifan will stream 70 of the invited films online this year. Watcha will establish a special section for the festival where viewers can watch the films from July 10 to 16. The films will not be available for screening on mobile applications.

“Online screening is an entirely new challenge for Bifan, but we hope that it can set the precedent for both the festival and OTT [over-the-top] platforms in the midst of change,” the festival director Shin Chul said in an official statement. “We hope that it can create a special opportunity for all moviegoers thirsty for new films.”

“We hope that our attempts can also lead to a reform in ways the audience can see the films,” Park Tae-hoon, CEO of the Watcha said. “Based on the know-how and our technical advances that we have gained through maintaining our service, we plan to continue to look for ways in which we can co-exist with local film events and the film industry.”

Instead of seeing the collaboration with OTT platforms as a temporary measure, Bifan plans to continue working with the streaming service to establish a new model for other film events to follow.

The 24th Bifan will be conducted with the safety of the audience and residents of Bucheon as the main priority. The opening and closing ceremonies will be hosted with a small audience while disinfection of the theaters will be carried out periodically.

The festival is scheduled to be hosted from July 9 to 16.