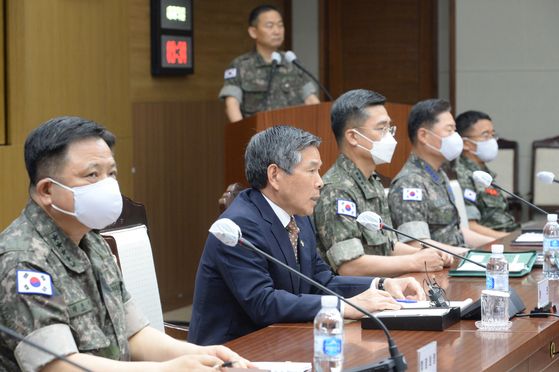 
The U.S. State Department Tuesday said it was disappointed with North Korea’s decision to cut communications with South Korea and urged the regime to return to diplomatic talks.


The statement came in response to Pyongyang’s bombshell move to sever all official phone links with Seoul on the eve of the second anniversary of North Korean leader Kim Jong-un’s first summit with U.S. President Donald Trump.

“The United States has always supported progress in inter-Korean relations, and we are disappointed in the DPRK's recent actions,” a department spokesman told Yonhap News Agency, referring to North Korea by the acronym of its official name, the Democratic People's Republic of Korea.

With denuclearization negotiations with Washington dead in the water since the failed second Trump-Kim summit in Vietnam in February 2019, Pyongyang chose to make Seoul the target of its ire this week, slamming the South Korean government for failing to stop North Korean defectors from dispatching balloons containing propaganda leaflets across the border.

After the North proclaimed it would henceforth regard South Korea as an “enemy” in a statement announcing the ending of communication on Tuesday, officials in Seoul found themselves scrambling to respond to mounting domestic criticism of the government’s passive stance toward Pyongyang.

The spokesman for Seoul’s Ministry of Unification, the South’s top inter-Korean agency, said in a press briefing Wednesday it was “inappropriate to approach [relations with the North] through an emotional lens,” and that the government’s policy was “about solving problems while managing the situation.”

Spokesman Yoh Sang-key added the question of leaflet distribution by activists represented a clear violation of the Panmunjom agreement signed with the North, which was why the government “felt the necessity to act on the matter early on,” he said.

Following an aggressive statement from Kim Yo-jong, North Korean leader Kim Jong-un’s younger sister, that threatened the South over the leaflet issue on June 4, the Moon Jae-in administration and ruling party said they would push a bill to ban the leaflets — a move that triggered an intense backlash from the conservative opposition and politically active defectors from North Korea.

Yoh said the leaflet issue had been a problem for many previous administrations due to the tensions it incited with the North. The ministry on Wednesday followed through on cracking down on the leaflets by filing police complaints against two activist groups for violating a law on inter-Korean cooperation and exchanges and resolved to revoke the corporate licenses of both groups.

The civic group Fighters for a Free North Korea, led by the defector-activist Park Sang-hak, and another affiliate run by his brother were responsible for dispatching hundreds of thousands of leaflets, books, USB sticks and $1 bills on balloons across the border into the North on May 31, an act that the Unification Ministry said "endangered the lives and safety of border area citizens and raised tensions between South and North." 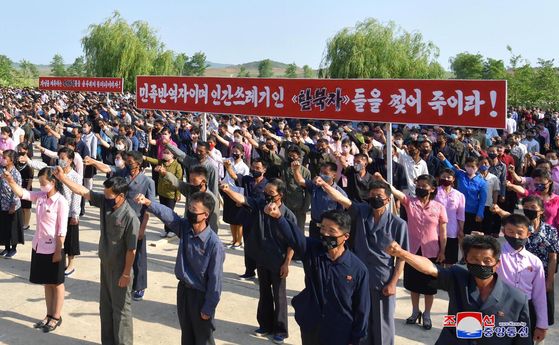 
As to the rupture in communications with the North, Yoh said Seoul will continue to make efforts toward dialogue but that it would not attempt phone calls to the North until an inter-Korean settlement is reached.


Military officials in Seoul were also on high alert Wednesday after Pyongyang’s hints that it could renege on a military signed between the Koreas at a summit in Pyongyang in September 2019.

In a meeting between top commanders of South Korea’s military on Wednesday, Minister of National Defense Jeong Kyeong-doo said the North was “shifting blame” to Seoul for the deterioration of inter-Korean relations, while failing to show whether it was committed to the September 2018 military agreement, which pledges to halt all acts of mutual hostility.

South Korea will continue to follow through with the agreement, Jeong added, though its military would maintain readiness for any contingencies.

The country’s presidential office, the Blue House, has yet to issue a separate response to the North’s actions, in spite of the fact that Moon’s North Korea policy is facing its greatest challenge since he took office in 2017.

The administration may be harboring hope that all is not yet lost.

Kim Joon-hyung, one of Moon’s foreign policy advisors and head of the government-run Korea National Diplomatic Academy, told a local radio broadcaster Wednesday that while the current situation was regrettable, the North does not appear to have burned its bridges.

“A strategic provocation from the North that upsets the apple cart would mean a return to 2017, but North Korea does not yet appear to want that,” he said.

“If its actions are a sign of exasperation by the North, [the South Korean government] must actively restart the peace process on the peninsula,” Kim added. “We must negotiate not for North Korea’s sake but because we have too much to lose.”