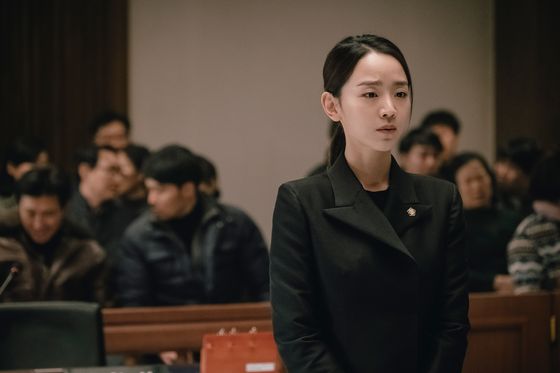 
Despite concerns of another spike in coronavirus cases, weekend box office sales surged due to the release of new films and a government-led discount event.


According to Korean Film Council data, the total number of moviegoers who visited theaters over the weekend jumped up nearly 100,000, recording an estimated 403,000 in total.

The box office sales are the highest since March.

A government 17-billon-won ($14 million) fund to support the local film industry was partly spent to offer 6,000-won discounts for an average 12,000-won movie ticket is continuing to encourage hesitant moviegoers to visit their nearest theaters, with box office sales boosted by the release of new films.

The first and second spots this weekend were taken by local films. “Innocence,” which premiered on Wednesday, took the first spot, attracting an estimated 203,000 people in 1,111 screenings. Starring veteran actors Shin Hae-sun, Bae Jong-ok and Huh Joon-ho, the film is about one lawyer’s journey to prove her mother’s innocence in a poison case where she is targeted as the number one suspect.

The second place was taken by “Intruder,” a mystery thriller starring actors Song Ji-hyo and Kim Moo-yeol. Seo-jin (played by Kim) is a widower still mourning his wife when he is to reconciled with his long-lost younger sister Yoo-jin (played by Song), who was missing for the last 25 years.

The other top five films were foreign films, such as “The Aeronauts” starring Eddie Redmayne and Felicity Jones, “The Greatest Showman” (2017) and “The High Note” featuring Dakota Johnson and Tracee Ellis Ross.