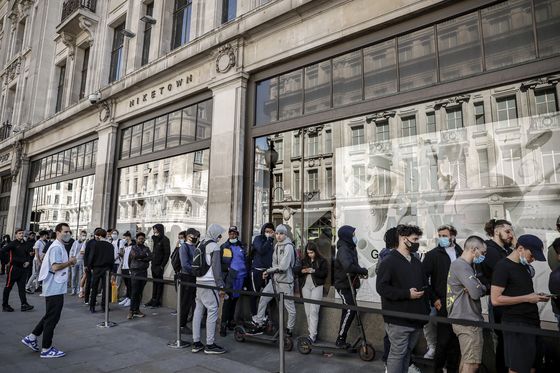 People queue outside the Niketown shop in London on Monday. Whether its German holidaymakers basking in Spain's sunshine or Parisians renewing their love affair with their city, Monday's border openings and further scrapping of restrictions offered Europeans a taste of pre-coronavirus life that they may have taken for granted. [AP/YONHAP]

Long lines stretched down streets in England on Monday as shops selling items considered as nonessential during the coronavirus pandemic, such as sneakers and toys, welcomed customers for the first time since the country was put into lockdown in late March.


Starved of the retail experience for the best part of three months, the keenest of shoppers rushed to make up for lost time, to pick up a bargain, browse or just have a chat.

Most appeared to abide by the rules of the "new normal" to remain two meters (6.5 feet) apart as they awaited their turn to enter the stores, though pushing and shoving was evident in some places, like the NikeTown store on Oxford Street, London's famous shopping district.

For Pamela Crystal, 46, it was a far more relaxing experience at the nearby upscale Selfridges department store.

"You don't realize how much you miss physical shopping until you actually come into the shop. It's great," she said. "It's nice to see people, talk to salespeople. It feels like we're normal again."

The new shopping experience is anything but normal, though.

Shops are limiting numbers and are providing hand sanitizer as well as creating one-way traffic systems inside. Plastic screens protect workers from shoppers at payment counters and some shops won't accept cash. At the Apple store on Regent Street in central London, staff checked customers' temperatures and insisted upon face coverings.

Roger Shakles, managing director of Sewcraft, a small haberdashery shop in the central England town of Swindon, said people have to sanitize their hands before entering.

"We're a very tactile shop, people have to feel and touch to get an idea of what they're buying," he said.

Not all shops in England are reopening. Many say the social distancing guidelines are just too difficult and are urging the British government to reduce the 2-meter requirement.

Critics have also accused the government of being too hasty given still-high levels of daily coronavirus infections. Though the country's daily virus-related death rates have fallen to below those seen before the lockdown, there are worries of a second spike. Britain, as a whole, has recorded 41,736 coronavirus-related deaths, the third highest in the world behind the United States and Brazil.

Customers are being encouraged to "be sensible" as the government seeks to reopen the economy "gradually and carefully." Figures last week showed that the British economy, which depends heavily on retail, shrank by 20% in April alone.

On Oxford Street, businesses have installed scores of signs to ensure social distancing. Some sidewalks have been widened and extra bike stations were put up to encourage shoppers to travel there without using the city's Underground subway.

With virtually no tourists in town, London's entire West End shopping and theater district is expected to see just 10% to 15% of its normal customers this week. International tourists now face a 14-day quarantine upon arrival in Britain.

Linda Pilkington, who owns a high-end perfume boutique off London's designer and jewelry hub of Bond Street, says the shopping experience will inevitably be dulled because restaurants, theaters and other entertainment facilities remain closed.

"People like the social side of shopping. When you hit Bond Street and all the grand shops, it's an exciting event," she said. "All those people coming to London for a show, making a weekend of it, that won't be there. It's just not going to be the same."

Pilkington's tiny shop, Ormonde Jayne, will only let one customer in at a time. Shoppers are encouraged to sanitize their hands and the whole store needs to be wiped down every time a shopper leaves.

John Lewis, a popular British department store with outlets around the country, is trying to be optimistic.

"I'm hopeful that, while the overall atmosphere will feel a bit different to them, what they'll actually find is a kind of pleasant surprise that it's calm, it's pleasant, it's well ordered," said Andrew Murphy, director of operations. "But it's also still got the real advantage of the physical shopping experience and the things that you can't do online."

Analysts say the pandemic has accelerated a shift to online shopping, not least because many businesses need to cut rental costs to survive.

To lure wary shoppers back, Selfridges lined up street performers to entertain anyone queuing, while DJs will play music inside to liven things up. Selfridges said the last time it had to close its doors was in 1941 when it was hit by a bomb during World War II.

"We've nearly doubled our sales online, but clearly three months' closure is going to have an impact on our business," said Meave Wall, store director at Selfridges. "Today's the first day of what's going to be quite a long journey back for us but based on the customers we've seen queuing this morning we're definitely optimistic of a return to the stores."

YG Entertainment to open its cafe space on Tuesday