Authorities have not tied the woman, in her 20s, to any secondary infections yet, but Covid-19 tests are ongoing and about 50 people who had close contact with her are being checked.

Seoul health officials said the hostess appeared not to have had any contact with customers at the karaoke bar in Yeoksam-dong — located between Gangnam Station and Seolleung Station of Seoul subway line No. 2 — because she didn’t show up for work Monday, when the business reopened for the first time in over a month.

The worker, however, had visited the bar on Sunday, where she and her colleagues met for about three hours to tidy the place up ahead of reopening. Later that night, she felt symptoms of the virus come on and visited a Covid-19 testing center at a hospital in Geumcheon District, southern Seoul, to be examined.

Everyone who cleaned the bar with the patient on Sunday has been told to self-quarantine in their homes, and the bar was shut down again after disinfection, said Na Baeg-ju, director general of the Seoul Metropolitan Government’s Citizens’ Health Bureau.

Officials believe the hostess is linked to the cluster at health care company Richway in Gwanak District, southern Seoul, which recorded 172 patients as of Tuesday at noon.

On June 6, the hostess had visited the same bar in Seocho-dong, southern Seoul, as two patients who have already been confirmed as connected to the Richway hot spot. Either of the two patients could have transmitted the virus to the hostess, Seoul officials said, though further contact tracing is needed to confirm this. 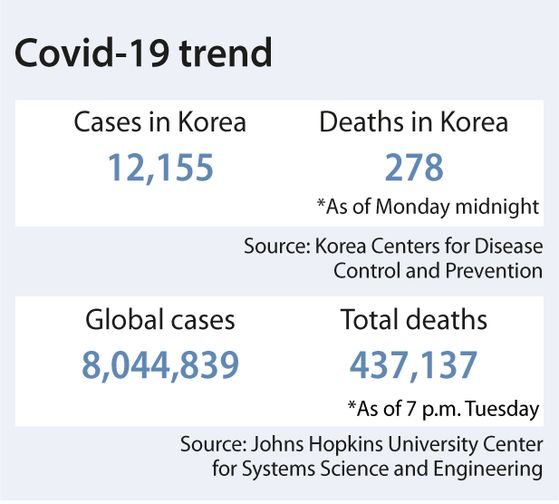 The Seoul government office said Tuesday that entertainment businesses that were allowed to reopen Monday can operate for now, but warned they will be heavily scrutinized by a team of roughly 300 district officials and police officers to enforce the government’s rigorous hygiene rules. If they get busted flouting the rules, they will be forced to shut down again, and if a patient turns out to have been infected in their business, the owner will have to pay for the patients’ treatment, Seoul officials cautioned.

On May 9, shortly after a huge cluster emerged from a string of nightclubs and bars in Itaewon-dong, central Seoul, the Seoul government office ordered the temporary closure of all businesses in the capital that are grouped in what’s called the “entertainment industry,” including clubs, hostess and karaoke bars and other establishments that allow drinking and dancing. Seoul didn’t set a deadline for the closures at the time.

The Seoul office allowed some businesses that don’t involve dancing — such as hostess and karaoke bars — to reopen from Monday at 6 p.m. on the condition they stick to rigorous social distancing and hygiene rules. Clubs and other places that allow dancing weren’t allowed to reopen.

Thirty-four new Covid-19 cases were detected across the nation Monday, the Korea Centers for Disease Control and Prevention (KCDC) announced Tuesday morning, three less than the day before.

Among Monday’s 34 new cases, 13 were imported and the rest were predominantly from the Seoul metropolitan area as several clusters continue to grow. Eleven were from Seoul, two were from Incheon and four were from Gyeonggi.

No new Covid-19 cases have been linked to the Lotte distribution center in Songpa District, southern Seoul, where a Chinese worker tested positive last Saturday.