The great reservation war caused by the humble pasta dish

The great reservation war caused by the humble pasta dish


Restaurants that focus on serving a variety of pasta dishes are proving popular these days.

Reservations for eateries that offer bar seating in front of the kitchen are particularly hard to come by, as diners want to enjoy the sights and smells of their meals while the food is being prepared.

Bawi Pasta Bar, a small restaurant in Seongsu, eastern Seoul’s Seongdong District, is one such restaurant. The restaurant, which opened at the end of 2019, is located in a residential area and seats about eight guests. It first earned attention on social media about a year ago thanks to its hand-crafted pasta.

It’s notorious for rarely having any seats available and the foodie community often asks for tips about how to bag a reservation. 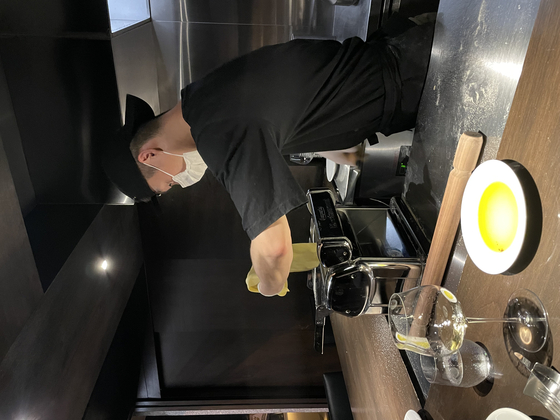 
The inside of the restaurant is painted black which adds to the drama of the cooking performance.

At Bawi, chef Kim Hyun-joong crafts and cuts the pasta right in front of the guests. Although it is difficult to actually talk to the chef during the service, as he is the only person preparing the dishes for the entire restaurant, he takes diners through the entire process of preparing the pasta.

It is entertaining and also informative to watch him move back and forth between the hot stove and the pasta machines to make his own Italian-inspired creation. He serves pasta dishes as part of a set menu and the dishes are subject to change according to seasonality and the chef’s preference.

“Since many locals here are familiar with having carbs in their meals, people consider a dish of pasta a full meal and even seem to prefer it,” said chef Kim. “On top of that, the concept of eating their pasta around the bar seats seems to really appeal to diners as it feels a little different from other pasta restaurants they have previously visited.”

When Bawi became overwhelmed with Instagram messages and calls, the restaurant employed a new rule that it only takes reservations through the Catchtable application, a Korean equivalent of OpenTable.

The set menu at Bawi usually consists of an appetizer, four pasta dishes and a dessert, which is priced at 75,000 won ($64) per person. Kim, however, says he actually prefers offering diners an a la carte menu, to allow them more options to choose from, but that became impossible to maintain with the influx of guests. He changed to the set menu and only takes one reservation every hour. Bawi is set to relocate in a few months and Kim plans to bring back the a la carte menu when it does.

“The charm of pasta is that it is comfortable and exciting to eat for the diners and fun for chefs to prepare,” said Kim adding that he wants to serve his food in a bigger place with more staff to accommodate more diners.

“A chef I worked with in Japan once said choosing ingredients for pasta should be as simple and easy as choosing what to wear every day. Pasta is something that is very comfortable and I think that’s why this particular food is widely enjoyed.”

Evidence Seoul, which opened in November, has similar bar seating to Bawi, as well as individual tables. Located in Cheongdam in southern Seoul’s Gangnam District, the restaurant also offers pasta as part of a set menu. Chef Lee Tae-woo makes all the pasta from scratch and also includes the ingredients of the dish in the dough. For example, if truffle is the main ingredient of a certain dish, then truffle is added into pasta. 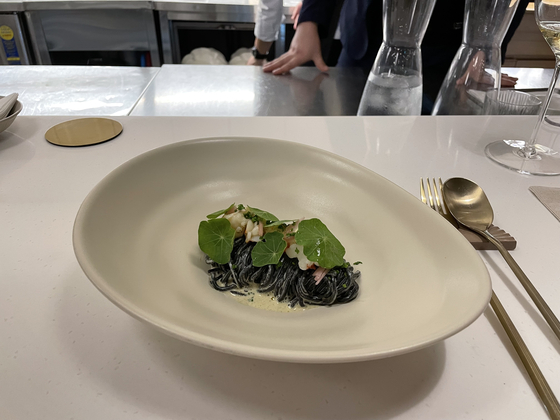 
“We try to use dough in many different shapes other than just long spaghetti noodles that people are most familiar with, such as crafting tart shells to make appetizers,” said Lee. “I even want to make desserts using pasta dough so that diners can truly have a full pasta experience.”

At Evidence, the pasta doesn’t necessarily feel Italian. The chef takes flavors and cooking techniques used in many different cuisines from all around the world to create more contemporary dishes.

“People seem to have knowledge about foreign words and concepts that relate to pasta-making, such as lasagna, bolognese, pomodoro, or putanesca,” said Lee.

“They seem to enjoy going to a restaurant where they feel familiar with the concept that also offers a twist." 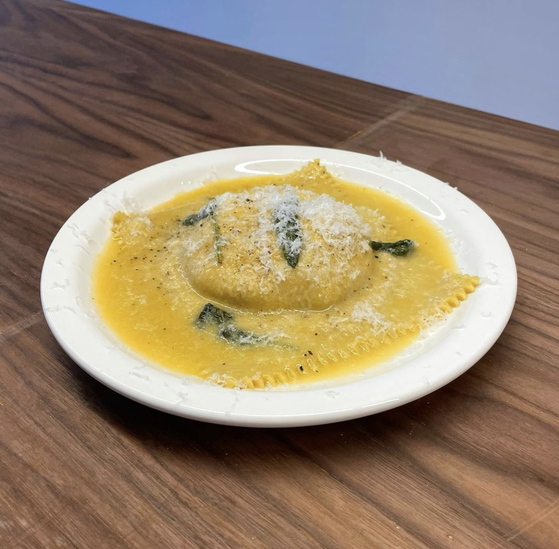 
Uovo Pasta Bar, also in Seongsu, had its soft-opening in May and already requires reservations at least a month in advance. Chef Im Jung-seob also makes everything from scratch.

Im explains the bar-style restaurants are what new owner-chefs prefer as they can work alone without any additional manpower, greatly cutting down on costs.

“Such concept is made out of necessity, but with more and more of such restaurants opening up, consumers now take it as a trendy thing they need to visit and experience,” said chef Im who says he always wanted to open a pasta restaurant. He started off at Uovo alone but with the influx of reservations he has since hired a manager to take operations.

Uovo offers an a la carte menu and pasta dishes start from 19,000 won. 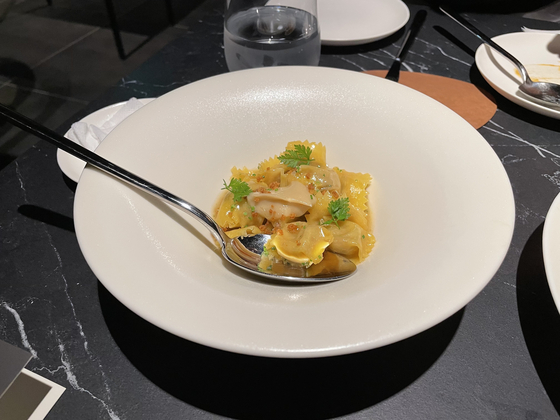 Started by two chefs, married couple Lim Hong-keun and Shin Ga-young, the restaurant has now hired three more staff to cater better to customers. The couple originally debated whether to do a bar-style restaurant, but decided last minute that it might be more comfortable for diners to sit at a bigger table for their meal.

After chef Lim worked in Michelin-starred Italian restaurant Marea in New York in 2013, he made up his mind that he would one day open his own pasta place.

“Compared to other Western-style food like French, what’s put in a plate of pasta can be simpler and that means pasta can be relatively inexpensive for diners to eat on a daily basis,” said chef Lim.

“Hand-crafted pasta isn’t a new concept at all since there have been other restaurants that had done what we widely enjoy these days, but the [infamous reservation war] at Bawi had made more people rediscover this particular style of pasta once again.” 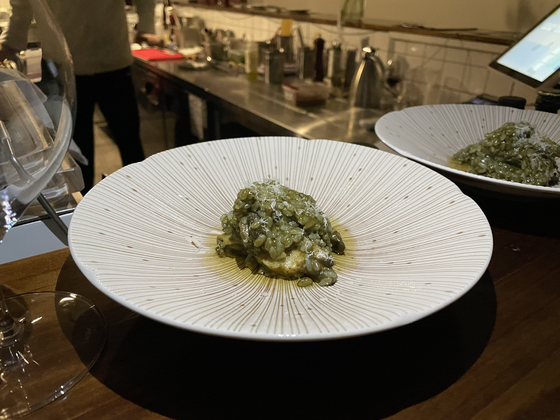 
Campo in eastern Seoul’s Gangdong District has also found itself part of the pasta craze. Originally opened in December in a more residential district away from restaurant-heavy districts like Gangnam and Mapo, the restaurant run by chef Lim Eung-gyu offers a variety of pasta dishes in a bar-style restaurant with one additional table. He also runs the restaurant by himself.