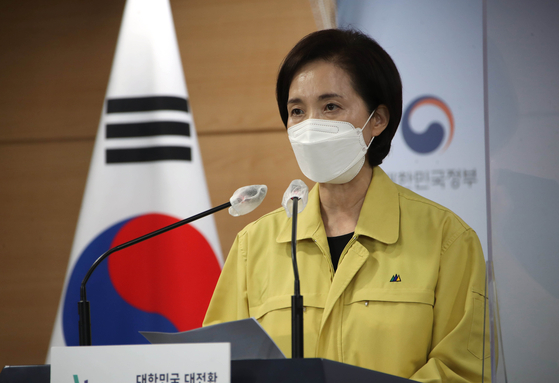 Education Minister Yoo Eun-hae announces the latest plans for the upcoming fall semester at the government complex in Seoul on Monday. [YONHAP]


In-person classes for kindergartens to high schools will be kept, even under the highest level of social distancing, the Education Ministry announced Monday.

The Ministry of Education on Monday unveiled its latest plans for the upcoming fall semester, which will start in late August.

Under the renewed plan, all students will attend classes in person up to Level 3, or the second-highest level of the country’s four-tier distancing scheme.

In the highest Level 4, schools are allowed to offer in-person teaching, with an attendance cap.

This attendance cap will be set at one-half for third to sixth graders in elementary school, two-thirds for middle schoolers and one-half for high schoolers.

Kindergartens, first and second grades and special education schools will continue to be exempt from attendance limits, as well as high school seniors who are set to be fully vaccinated by Aug. 20 to take the College Scholastic Ability Test, or CSAT.

The ministry, however, set the first two to three weeks of the fall semester as an adjustment period, and are allowing students with higher demand for in-person teaching, such as first and second graders and high school seniors, to come back first.

During this adjustment period, when schools reopen from the third or fourth week of August, until Sept. 3, elementary schools in areas that are under Level 4 restrictions will have only first and second grades attend in person, and third to sixth graders will receive remote classes online.

The attendance cap will be one-third for middle schoolers. First-year and second-year students in high school will take turns having in-person classes, along with high school seniors who will always attend on-site classes.

For schools in other regions under Level 3 during the adjustment period, first and second graders will go to school every day, while three-fourths of third to sixth graders will be allowed.

Two-thirds of middle school students will go to school, and either one-half or all first-year and second-year high schoolers will return.

The ministry has been stressing from June the need to get all students back into the classroom.

Under the ministry's previous plan announced in late June, all schools were told to switch to online classes under the strictest Level 4.

However, with Covid-19 cases showing no signs of slowing, the ministry said they have agreed to the original plan of operating in-person classes for all schools despite social distancing measures being at the highest levels, after talks with health experts.

The reason for the eased measures is, despite the recent spread of Covid-19 cases, the ministry believes that the number of cluster infections originating at schools is not that large.

After analyzing the Covid-19 infection route of students in the spring semester, schools were found to be the least-cited places for contraction at 15.9 percent, while home was at 48.7 percent and the community at 22.6 percent, the ministry said.

The ministry also cited that schools that recorded five or more infections accounted for only 0.44 percent of the total schools in the country, leading them to believe schools are a relatively safe place for children to be.

They also highlighted that both the school faculty and parents prefer in-person teaching.

Universities, on the other hand, will expand to offline classes until 70 percent of the country's population has received at least one dose of a Covid-19 vaccine — in September or possibly later, as has already been announced in June.

However, each university can decide independently its range of offline classes depending on the vaccination rate of the school faculty and the distancing level of its location.

"It's a difficult time, but it's time to give back to children what they can enjoy only when they go to school,” Education Minister Yoo Eun-hye said. “We will closely watch the virus situation and respond quickly in the case of a crisis, in close cooperation with related agencies.”