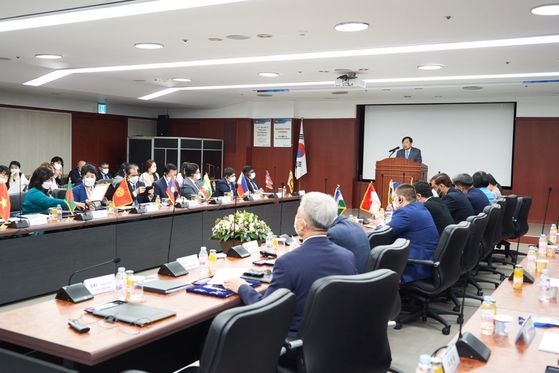 As part of the program, Korea’s sole aircraft manufacturer signed a memorandum of understanding with the Human Resources Development Service of Korea and the government of South Gyeongsang on Wednesday to support an employment permit system that helps foreign labor receive treatment equal to domestic workers.

Many foreign workers in Korea come for the target markets.

The signing ceremony, which took place in Sacheon, South Gyeongsang, was attended by officials from 16 countries, including Indonesia, Thailand, the Philippines and Vietnam.

KAI "is certain that the agreement, which expands non-governmental interactions, will help the countries suggest a new vision for cooperation and strengthen diplomatic relations,” said KAI CEO Ahn Hyun-ho. KAI "will try to provide practical help for strengthening each country’s aircraft operation and defense expansion by developing and manufacturing aircraft from the eye level of client countries.”

“The latest version, unveiled in February, has two new fuel tanks, doubling the distance it can fly,” said Lee Jang-ho, a spokesperson for KAI. “Also, the dashboard has been digitized and an air conditioner newly installed.”

The police helicopter was unveiled in 2013, but KAI is still working on exporting the aircraft.

“Unlike consumer goods, like automobiles, it takes longer to export aircraft because the decision is based on trust due to safety reasons,” Lee added.