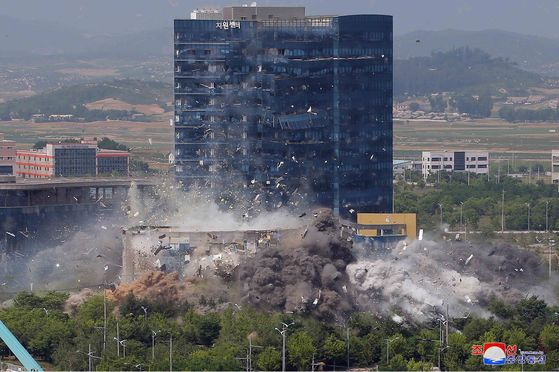 A screen capture from a North Korean state television broadcast from Wednesday shows the North's demolition of the inter-Korean liaison office on Tuesday afternoon. [YONHAP]


Rattled by the demolition of the inter-Korean liaison office and Pyongyang's decision to remilitarize zones near the border, South Korea’s presidential office on Wednesday unleashed a rare public rebuke of North Korean leader Kim Jong-un’s younger sister, saying Seoul would “no longer” endure her provocative rhetoric.

“But the statement from North Korean First Vice Department Director Kim Yo-jong, which belittled [the speech] without clearly understanding its meaning, was a senseless act.”

Yoon’s remarks were the strongest response to emerge from a liberal administration that has given Pyongyang the benefit of its doubt time and again, possibly signaling a change in Moon’s approach to the North.

The Blue House statement was a reply to a long-winded statement from Kim Yo-jong published Wednesday morning slamming Moon directly for what she called the “impudence and vileness” in the speech he delivered to commemorate the 20th anniversary of the first inter-Korean summit of 2000.

Among various insults, Kim Yo-jong accused Moon of “shameless sophism” in allowing South Korean activists to send propaganda leaflets across the border into the North.

More importantly, Kim’s statement made it clear that the leaflet issue was only a pretext to lash out against the South for remaining in lockstep with the United States on denuclearization negotiations and sanctions.

“The south Korean chief executive is the responsible party for hauling the north-south ties,” Kim said in an English-language version of the statement carried by the state-run Korean Central News Agency (KCNA).

“He confessed that he approached the north-south relations just as he step on icy ground, but it was the south Korean chief executive who had no resolution and remained hesitant to do what he could surely do in relations between the north and the south.”

Accusing Moon of “pro-U.S. flunkyism and submission,” which she called a “prelude to self-destruction,” Kim accused Moon of betraying inter-Korean agreements and staging war exercises that provoked the North.

Pyongyang could no longer have discussions with such a partner, Kim said, adding South Korean authorities will “be forced to keenly realize how high price they will have to pay for discarding confidence.”

“The south Korean chief executive greatly favors sending special envoys for 'tiding over crises' and raises preposterous proposals frequently, but he has to clearly understand that such a trick will no longer work on us,” the report read.

“The solution to the present crisis between the north and the south caused by the incompetence and irresponsibility of the south Korean authorities is impossible and it can be terminated only when proper price is paid.”

Rather than rely on such “unrealistic proposals,” Seoul must take “proper actions in return and calm down, strictly controlling words and acts of fools who keep provoking us,” the report quoted Kim Yo-jong as saying.

Pyongyang’s disparagement of the special envoy proposal, which the Blue House said demonstrated a lack of “basic etiquette,” illustrated how the Moon administration has been backed into a corner in the aftermath of the North’s decision to demolish the most tangible symbol of Moon’s short-lived rapprochement with Pyongyang, the liaison office, on Tuesday.

Yet Kim’s bitter commentary was not the only bombshell launched at Seoul on Wednesday.

Another statement, from a spokesman for the General Staff of the North’s Korean People’s Army (KPA), announced the regime’s military will deploy forces to areas demilitarized under inter-Korean agreements, including two economic zones once shared with the South: the Kaesong Industrial Complex and Mount Kumgang tourist area.

Plans have also been drawn up to reinstate several guard posts in the demilitarized zone (DMZ) that were dismantled under a military agreement signed between the Koreas at their third summit of 2018, the spokesman said, while units on the front line will be reinforced and allowed to resume “all kinds of regular military exercises close to the boundary.”


The announcement from the KPA General Staff, which effectively renders useless the Koreas’ September 2018 military agreement to reduce tensions on the border, was received with alarm by Seoul’s Ministry of National Defense, which warned the North of putting its military rearmament plans into practice.

“Such measures [outlined in the KPA statement] shatter with one stroke the efforts of both countries to improve relations and build peace on the Korean Peninsula over the last two decades, and if the North carries them out, they will be met with reciprocity,” said Maj. Gen. Jeon Dong-jin, deputy director of operations at the South’s Joint Chiefs of Staff.

Jeon added Seoul was beefing up its military preparedness at the border, but said efforts would continue to prevent tensions from rising even further. The Defense Ministry also suspended excavation efforts in the DMZ for the remains of soldiers who fought in the 1950-53 Korean War.

Yet another North Korean statement, from United Front Department Director Jang Kum-chol, also took stabs at Moon and the South Korean government for evoking “disgust and nasty feelings” with their strong response to the destruction of the liaison office at Kaesong on Tuesday.

“We will remain unperturbed though we bear the responsibility for the total catastrophe of the inter-Korean relations,” Jang said in the English-language statement, seemingly admitting the act has closed the door on any reconciliation between the Koreas.

“There will be neither exchange nor cooperation with the south Korean authorities in the future. And there will be no word to be exchanged.”

Pyongyang’s demolition of the liaison office, which the regime’s state media published photographs of on Wednesday, sent shock waves across South Korea, and prompted Seoul’s top inter-Korean official, Minister of Unification Kim Yeon-chul, to announce he was stepping down from office. 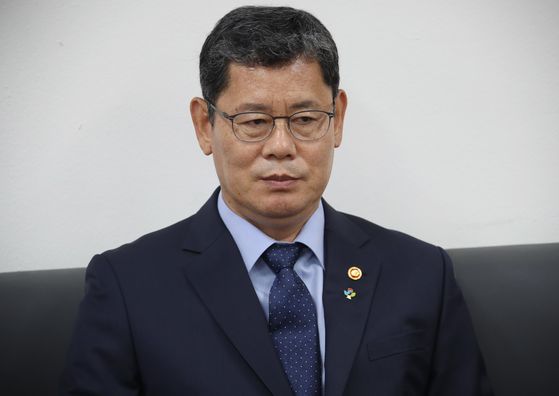 
Speaking to reporters at the Unification Ministry Wednesday, Kim Yeon-chul said he had tendered his resignation to the Blue House that morning to take  responsibility for the rapid deterioration in inter-Korean relations this month.

“In this situation, I feel it is my duty to create a means by which the atmosphere can shift,” he said, before apologizing for his abrupt departure.

Earlier that day, the Unification Ministry’s Vice Minister Suh Ho called the destruction of the liaison office an “irrational and unacceptable” act by the North that represented a unilateral negation of the Panmunjom agreement signed by Moon and Kim Jong-un at their first summit in April 2018.

“The North will have to take complete responsibility for this action,” Suh said.