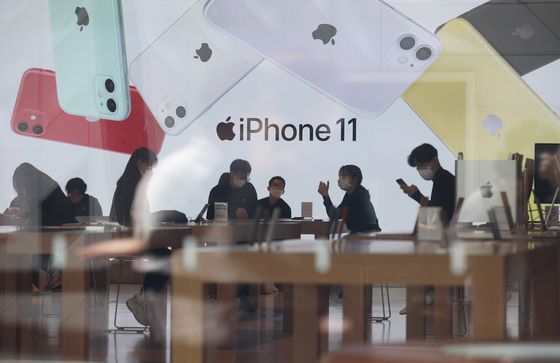 The only official Apple store in Korea in Gangnam, southern Seoul, reopened in April after temporarily closing due to the coronavirus outbreak. [YONHAP]


Apple has agreed to change its business practices in Korean and how it deals with marketing expenses and repairs under warranty.


According to the Fair Trade Commission, the American smartphone giant has agreed to renegotiate with Korean telecommunication companies — SK Telecom, KT and LG U+ — how it splits the costs of marketing and repairs.

As a result, the FTC will not take actions against Apple, such as imposing a fine on the company for unfair trade practices or even file a criminal complaint for abuse of market dominance.

The FTC said it has been investigating Apple's business practices since 2016.

After two yeas of investigation, the FTC finalized a report that was submitted to a committee of nine commissioners, who were to make a final decision on the matter.

In June 2019, Apple proposed some voluntary changes to its business practices, which included sharing of marketing costs and ways to support small- and medium-sized enterprises (SMEs) in related industries such as software developers.

Since then, the company made changes to its proposal. The committee reviewed the final proposal on May 13, which it approved.

This was not the first time Apple was accused of treating its telecommunication company partners unfairly.

Apple has required telecommunication companies to pay all advertisement and marketing expenses for its products including store displays and posters, which Apple checked to make sure they followed its advertising guidelines.

Other phone manufacturers such as Samsung Electronics paid a portion of advertising costs when launching new products.

The details of Apple's agreement will be made public after being reviewed by the local telecommunication companies.

In the fourth quarter of last year, according to Counterpoint Research, Apple’s market share in Korea had risen to 28 percent, doubling from 11 percent in the third quarter thanks to the release of the iPhone 11.

But that was a major drop from 71 percent the previous quarter.