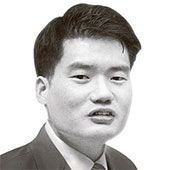 
“This is Moon Jae-in. I liked your interview yesterday.” In early 2015, Kyungnam University professor and North Korea expert Kim Geun-sik received a call as he was getting on the subway to work. He was not acquainted with the head of the Democratic Party. When North Korean defector groups warned about a plan to distribute propaganda leaflets to the North, Kim appeared on television and said that there were adverse effects such as the safety of the residents in the border area being threatened. So, “They should refrain from leaflet distribution,” he said. Moon saw the interview and called Kim.

Kim told me that in the end Moon intended to say that North Korea was a sovereign and Kim Jong-un was an elected leader, so condemning it from another country didn’t make sense. “After I hear this, I decided President Moon’s view on the North was that North Korea was a sovereign and normal state.” Prof. Kim said, “I am really worried about the Blue House perception. If the president views North Korea like that, which aide can say it’s not right? When Kim Yo-jong, sister of North Korean leader Kim Jong-un, denounced our propaganda leaflets, a Blue House official and ruling Democratic Party members said such leaflets do no good and only harm. Where does this extreme expression come from? Wouldn’t it reflect the president’s intention?”

Unlike how North Korea makes a fool of South Korea now, South Korea was the power holder eight years ago. At the end of the Lee Myung-bak administration, North Korea begged South Korea to meet. Then Blue House secretary for foreign affairs and security Chun Young-woo said that the North Korean defense commission sent countless faxes to his office asking to meet and talk. He recalled that they nearly stalked him.

North Korea laid low because of the propaganda leaflets and broadcasting on speakers along the border. After the 2010 sinking of the Cheonan warship, the Lee administration resumed psychological warfare toward North Korea, and North Korea was cornered and began to beg to stop the leaflets in exchange for not cursing on Lee Myung-bak. The government asserted that South Korea is a society where people can curse the president, so North Korea could do as it wishes. North Korea was fretful and offered to do anything.

The government countered that if North Korea acknowledged the accountability for the Cheonan incident, psychological warfare along the border could be stopped. Surprisingly, North Korea accepted the offer and two Koreas began negotiation. The Blue House and North Korea’s defense commission officials met in the third country, including China, to avoid the influence of the United States and held many secret meetings to deal with the Cheonan sinking. North Korea refused to acknowledge responsibility but offered to express regret. It is farcical that North Korea asked the meetings to be kept secret.

Pyongyang kept a low profile because the South Korean government kept the principle that leaflets distributed by civilian groups cannot be controlled because of the freedom of speech. At the time of the bombing of Yeonpyeong Island, North Korea suffered a humiliation of being bombed on the mainland for the first time since the Korean War, as the South Korean forces countered with self-propelled artillery. The Rodong Sinmun reported that residents of Hwanghae Province made blood donation for the warriors who lost blood in the counterattack, suggesting the damage was serious.

As inter-Korean relations is about to fracture, the way to normalize it depends on President Moon. North Korea mercilessly tramples if the other side is weak — and lowers its tail if the other side is strong. Vague sympathy is the worst move and will make North Korea’s actions worse. When the South criticizes the North’s wrongdoings and clearly shows the will to retaliate, South Korea can lead the talks.

Above all, we have to return to the basics of the denuclearization of North Korea. Moon must not forget that trying to find any other ways around it will only lead to the tightened sanctions.