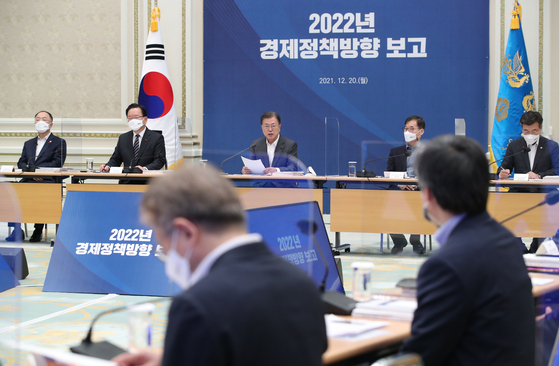 In a meeting with President Moon Jae-in at the Blue House on Monday, the government laid out next year's economic growth target. The government aims for 3.1 percent growth in 2022. [YONHAP]

Korea's economy will grow 3.1 percent in 2022 and 4.0 percent this year, according to the most recent figures from the Finance Ministry as reported to the administration.

Consumer prices will rise 2.2 percent next year, up from the previous projection of 1.4 percent. In June, the rate for this year was predicted to be 1.8 percent. That has been upped to 2.4 percent.

In its latest economic roadmap, the Moon Jae-in government said the focus of the government's policies is to achieve economic normalcy beyond overcoming the pandemic crisis.

The government forecasts exports increasing 2 percent, and imports are expected to expand 2.5 percent. It sees a recovery in jobs that require direct interaction with customers in 2022.

"Despite heightened uncertainties such as the recent resurgence of Covid-19 and global supply chain deadlock, this year the domestic market improved, exports have been firm and employment increased," said Finance Minister Hong Nam-ki on Monday. "We have solidified our position within the global top 10 with 4-percent growth, and we are expecting to see GNI per capita to reach all-time record of $35,000 since breaking $30,000 for the first time in 2017."

"It is likely our economy will continue the current firm growth in 2022," Hong added. "Especially, normalization will be a step faster with growth in both the domestic economy and exports."

The government said it plans to frontload 63-percent of the 607.7 trillion-won budget for next year.

Another 10 percent tax credit will be added for qualified purchases made at traditional markets. A person can get a maximum of 1 million won.

The government added that it is continuing its support of regional consumption boosting programs, including partially funding regional currencies and sponsoring major sales events, including those in May and November and the Christmas market in December.

In the first half of 2022, the government will promote events offering discount travel packages, including those for amusement parks.

The individual consumption tax on purchasing vehicles will remain at 3.5 percent from the previous 5 percent until end of June. The maximum cut is 1 million won.

For small business owners, the government said it will continue with its programs until the crisis situation ends, including raising the minimum amount on compensation for business losses resulting from social distancing restrictions from 100,000 won to 500,000 won and 35.8 trillion won in loans at low rates.

The government raised concern about the impact the aggressive spread of Omicron could have. The Omicron variant could cause bottlenecks in the global supply chain that could affect inflation and investments. Several European countries, despite having high vaccination rates, have returned to strict lockdown.

Another risk factor that the government notes is the rising household debt.

The government promised to strengthen its policies related to the shrinking population.

"We will be focusing on expanding the economically active population, including women, immigrant workers and the elderly," Hong said.