In economic ideology, distribution and growth have a hostile-dependent relationship. One cannot dominate or compromise too much. If I have to choose one, I would pick growth. The economy must continue to grow to have something to distribute. Deflation can be more painful to our lives than inflation.

The newspaper industry, which pays me my paycheck, is a sunset industry. After a boom period from the late 1980s, it has been in a downturn since the early 2000s. The work force suddenly became a liability. Companies and employees felt apologetic to one another. Comparing work conditions and pay with other publishers or industries was unthinkable. We were just thankful to have a job. Former U.S. President John F. Kennedy liked to use the phrase: ”The rising tide lifts all the boats.” To tweak his quote, an ebb can wipe out everything.

Why growth? We have witnessed the ruins wrought by a distribution-focused policy. President Moon Jae-in pressed ahead with levies on the rich over the last four years. Sharing some of the riches from the super-wealthy was based on blind faith in the holiness of fairer distribution. As a result, real estate prices went sky-high and asset wealth has become polarized. 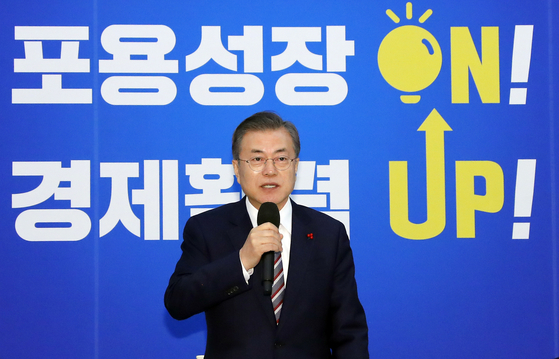 At a meeting of the National Economic Advisory Council at the Blue House, President Moon Jae-in champions the importance of “income-led” growth and inclusive growth, primarily a distribution-focused approach by the liberal administration, on December 26, 2018.

In the United States, President Joe Biden has been realigning the global industrial order through a $2.25 trillion stimuli package. The aim is to move the global supply chain away from China to the U.S. In response, China is bulking up its domestic economy backed by the world’s largest population to offset losses from exports. The European Union is spending 1 trillion euros to take the leadership in carbon-neutrality. Their policy focus is on promoting growth of a faster and bigger rate than other economies.

Despite such changes on the international front, our presidential aspirants — who must present visions for the future of the country — are mired in a debate on the concept of basic incomes. Rivals are busy raising the amount of money being promised to the people. When one pledges a monthly handout of 200,000 won ($180) to every adult, the cash is cunningly phrased as a “fair” income. But all the proposals fall in the category of handouts. National liabilities will top 1,000 trillion won next year. We have the fastest rising debt among developed economies. But no one cares about a little think called fiscal soundness.

The presidential hopefuls seem to be aware of the problem. They accuse one another of reckless spending schemes. The concept behind basic incomes is well-intentioned. Money is the only problem. The government must either tighten its belt or generate tax revenue to reduce the debt.

The solution is already laid out. Former Deputy Prime Minister for Economic Affairs Kim Dong-yeon, a potential candidate for president, summed it up. “Excess political and state role is getting in the way of economic growth.” He advises flexibility in the labor market and deregulation to encourage companies to grow. Doing so, however, is practically impossible in Korea. Easing the rigidity in the labor market requires a head-on clash with militant union groups like the Korean Confederation of Trade Unions. Few politicians would take up that challenge. Deregulation and reforms are derailed in the face of opposition by the establishment. Van-sharing platform Tada had to close up after the passage of a bipartisan law regulating new industries that threaten traditional ones.

I pray the debate among presidential aspirants centers on growth over the next 10 months leading up to election day on March 9. Pragmatic growth ideas are strong politically. During our industrialization period, President Park Chung Hee united the people with the common goal of building a prosperous nation. Deng Xiaoping’s opening and reform campaign set the grounds for China’s ascension. The U.S. economy flourished under Bill Clinton who was elected thanks to a campaign that focused on one idea: “It’s the economy, stupid!” A heated debate on spurring growth could change the next presidency.

So what type of growth? I would say “unfettered and unquestionable.” All the adjectives about growth under the Moon administration — income-led, inclusive, and innovation-led, for instance – were jokes. They only cared about distribution. Growth does not need explaning. A rising tide lifts all boats, as everyone in those boats know perfectly well.