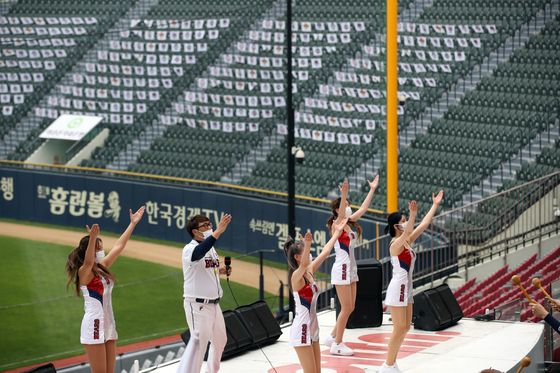 The Doosan Bears cheerleading squad performs to an empty stadium at Jamsil Baseball Stadium in southern Seoul on May 31. [YONHAP]

When the 2020 professional baseball season in Korea opened on May 5 without fans in the stands due to coronavirus concerns, the initial hope was that teams would be able to open their gates within a month or so.

The number of cases had been falling steadily to the point where it became safe enough for pro sports to begin, and if the level could be maintained for a few more weeks, then surely it would be safe for spectators to start attending games.

A recent spike in new Covid-19 cases in Seoul and surrounding regions forced the Korea Baseball Organization and its clubs to shelve any talks of selling tickets. Having fans back in June is out of the question.

With that, teams are nearing a breaking point when it comes to their finances.

Unlike in the Major League, where club owners and the players' union have been squabbling over player salaries for weeks while trying to begin the new season, there has been no discussion of a pay cut for players in the KBO.

But according to one club official, teams may have to take drastic measures if they don't start letting fans in by July.

"Last year, we made about 180 million won ($147,925) from gates per home game on average, and obviously we've made zero this year," a team official said, requesting anonymity. He added that gate receipts typically account for one-third of the it's revenue.

"We've been paying our players and employees in full. But if we keep playing without fans in July, a lot of teams will run into extremely serious trouble," he said. "They may have to take out a loan to pay salaries."

KBO clubs are owned and operated by major corporations such as Samsung, LG, SK and Lotte. Those companies typically provide grants for their baseball clubs, but during the nationwide economic downturn brought on by the pandemic, companies may cut down on their grants this year and teams will have to figure out ways to be less dependent on their companies.

There has been growing discontent among baseball fans that it made no sense for water parks and beaches to open while baseball stadiums remained closed, even though KBO clubs have all vowed to take stringent quarantine and distancing measures.

KBO league officials and clubs won't air their grievances on the record over that situation, considering the optics during the pandemic. But the above club official did say, "I just think it's ridiculous that baseball fans aren't allowed to attend games when water parks are open for business."

A marketing official with another team said he has spoken with other clubs' marketing executives, and the concerns about the bottom line are real.

"It's not just the teams. People running concession stands have paid their rents and they aren't making any money," the marketing official added. "Local businesses around baseball stadiums are all suffering."

When or if the gates do open, KBO teams will start selling about 20 percent of their seats at first, and then gradually increase that number. Even those small crowds will provide a huge relief, team officials say.

Fans would only be able to book their tickets using credit cards, which would make it easy for health authorities to trace contacts in case of positive Covid-19 cases.