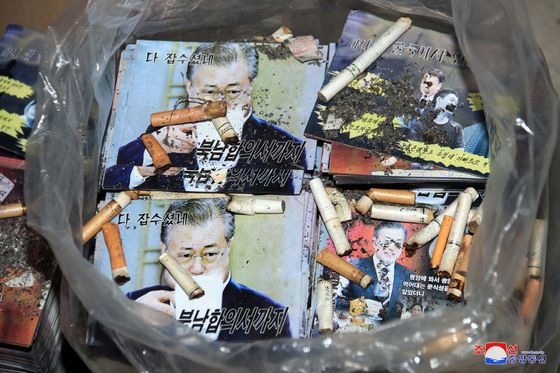 A photo released by the North's state-run Korean Central News Agency on Saturday, showing cigarette butts in a bag full of leaflets made by the regime condemning South Korean President Moon Jae-in. The North announced it will be dispatching such propaganda fliers toward the South in the near future. [YONHAP]


North Korea will “wipe out” the United States with nuclear arms should hostilities resume on the Korean Peninsula, Pyongyang’s embassy in Russia said Saturday.

The message comes after the recent severing of direct telephone communications between the governments of the two Koreas and the destruction of their liaison office, and as leaflets are sent by balloon to the North, where suspicious troop movements have been observed.

The embassy declared in a statement to mark the 70th anniversary of the outbreak of the 1950-53 Korean War that the regime is in possession of strategic missiles and nuclear arms, according to Russian News Agency TASS.

“These means can be used to mercilessly punish any force on Earth that dare threaten us,” the statement said.

Claiming the United States had not learned its lessons from the Korean War and continued to undertake military action on the peninsula in preparation to invade the North, the embassy said the beginning of a new war would “signal a very special event in world history marking the end of another empire called the United States.”

This sabre rattling from a regime with an estimated 30 to 40 nuclear weapons comes amid a major escalation in tensions between the two Koreas following the North’s unilateral demolition of the inter-Korean liaison office in Kaesong last week over the issue of propaganda leaflet distribution by anti-Pyongyang activists in the South.

After a series of threats warning the regime would remilitarize areas near the border disarmed under past inter-Korean agreements, Pyongyang’s state media on Saturday said the North had produced its own propaganda leaflets criticizing the South and that these would be sent across the border in due time.

South Korea’s top inter-Korean body, the Ministry of Unification, on Friday urged Pyongyang to refrain from such a plan, saying the act violated inter-Korean agreements and would further exacerbate relations.

Seoul was taking “all measures” to punish its own activist groups under domestic law should they attempt to dispatch leaflets to the North, the ministry said.

Yet the urging and reassurance from the South did little to change minds in Pyongyang, which countered with a statement from its own inter-Korean body, the Workers’ Party United Front Department (UFD), slamming the Unification Ministry’s statement as “absurd nonsense” that demonstrated the “impudence” of the South’s authorities.

“We are so fed up with south Korea that we do not want to make any response nor exchange any coarse words with it, but we can not but ask it if they do not feel ashamed,” an English-language version of the UFD statement read.

“We, clearly aware that leaflet scattering is the violation of the north-south agreement, do not have any intent to reconsider or change our plan at a time when the north-south relations have already been broken down.”

Notwithstanding the response from Pyongyang, Seoul faces its own battle in reining in domestic activists — many of them defectors from the North who have since become right-wing agitators — who have pushed back strongly against the government’s ban on leaflet spreading this month.

Park Sang-hak, the head of Fighters for a Free North Korea, the group that sparked a visceral response from Pyongyang by sending hundreds of thousands of leaflets into the North on May 31, told Yonhap News Agency on Saturday his organization planned to float around a million leaflets by balloon to mark the 70th anniversary of the outbreak of the 1950-53 Korean War.

“We are getting ready to send [the leaflet-filled balloons to the North] around June 25 based on wind conditions,” Park said. “If the wind doesn’t blow we cannot send them, but if wind conditions are right we can send them as early as tonight.”

Though experts say — and the regime itself hinted — the leaflet issue is largely a pretext used by the North to lash out against South Korea for the deadlock in denuclearization and sanctions relief negotiations, Pyongyang’s ire appears to have convinced such defector groups of the efficacy of their agitation methods against the North.

The Unification Ministry on June 10 filed charges against Park and his brother, the head of another group called Keun Saem, for violating laws on environmental damage due to their leaflet dispatches. The local governments of Incheon and Gyeonggi also announced they would crack down on any attempts to send such propaganda northward, stressing such acts endangered the safety of local residents.

Testifying to the heightened risk at the border, North Korea has been reinforcing its troop presence, redeploying small units to areas previously unoccupied across the demilitarized zone (DMZ).

According to one South Korean military source cited by Yonhap News Agency, units smaller than platoons were seen with shovels and other digging equipment in various dugouts unused in recent months. No activity has yet been spotted at the site of 10 guard posts North Korea dismantled and withdrew from in accordance with an inter-Korean military agreement signed in 2018, the source said, but Seoul’s military was closely watching the movements.

The General Staff of the North’s military on Wednesday described a series of detailed military action plans that included the deployment of troops to two inter-Korean cooperation zones: the Kaesong Industrial Complex and Mount Kumgang; reestablishment of civil police posts; and an upgrade of “front guard duty to top class combat duty system throughout the front,” meaning troops on the border would be fully armed at all times.

In light of these increased threats, the Pentagon on Thursday hinted at the possibility of resuming large-scale military exercises with South Korea, which have previously been scaled down to accommodate diplomatic engagements with Pyongyang.

“[Restarting the drills] is one of the things that we are constantly talking to our South Korean allies about to ensure that we as an alliance are presenting the most effective combined deterrence and defense capability for the people in South Korea,” said David Helvey, the U.S. acting assistant secretary of defense for Indo-Pacific Security Affairs, at a remote press conference.

Seoul’s top nuclear envoy Lee Do-hoon and U.S. State Deputy Secretary of State Stephen Biegun, who doubles as the special representative for North Korea, held talks in Washington over the weekend on the situation, but the contents of those discussions was not revealed to the public.

Upon his return to Seoul, Lee did not comment on reports from Japanese outlets that the South Korean government proposed partial sanctions relief for the North in order to alleviate pressure from Pyongyang.

Though a breakdown of inter-Korean relations has been hinted at by the regime for months as it voiced frustration with Seoul’s adherence to the U.S.-led sanctions campaign, the abruptness of Pyongyang’s renewed hostility sent officials in Seoul scrambling to understand why the North has chosen to react now.

An exclusive report by the JoongAng Ilbo on Sunday offered one possible explanation. According to a source in China familiar with relations with the North, the Chinese government recently sent around 800,000 tons of food aid to the country to help alleviate the regime’s dire food insecurity.

A total of 600,000 tons of rice and 200,000 tons of corn were shipped, the source said, and reached North Korea’s Nampo harbor in South Pyongan Province recently, to mark the first anniversary of Chinese President Xi Jinping’s first visit to the North as head of state on June 20 last year. At the time, Xi pledged to send around a million tons of aid to its ally in North Korea, which for two successive years in a row has been battered by weak harvests that have left around 10 million of its people wanting of basic nutrition, according to the World Food Programme.

Beijing’s assistance contrasted with the behavior shown by South Korea, which has only sent propaganda leaflets rather than food, and has generated anger among the public in the North, the source claimed.