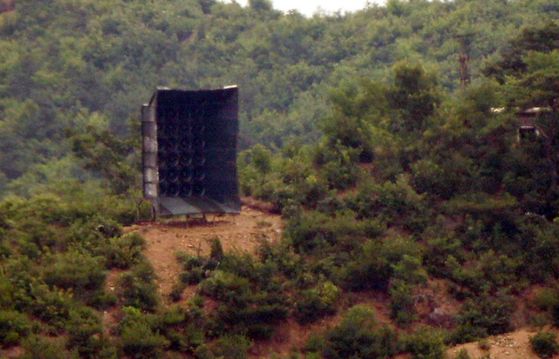 A North Korean loudspeaker sits on a hill in the demilitarized zone in Kaepoong County, North Hwanghae Province, after being installed on Monday afternoon. [YONHAP]


South Korea’s military is mulling reinstalling propaganda loudspeakers on the border after North Korea mounted loudspeakers in more than a dozen spots on its side of the demilitarized zone (DMZ) Monday.


According to a government source in Seoul Tuesday, the North completed the installation of loudspeakers for propaganda broadcasts at around 20 places along the eastern, central and western sections of the DMZ.

The move marked another step by Pyongyang to escalate its standoff with Seoul, and is the first time in two years loudspeakers have re-emerged as an issue, after both sides dismantled their systems in accordance with an agreement signed at their first summit.

No actual broadcasts had been aired from the loudspeakers as of Tuesday afternoon.

Seoul’s Ministry of National Defense immediately condemned the installations, repeating an earlier warning that Pyongyang would be made to “pay the price” if it moves ahead with actions that invalidate past efforts to build peace.

“The necessary measures will be put in place based on the situation,” said Defense Ministry Spokesperson Choi Hyun-soo, in what appeared to be a hint that Seoul could respond tit-for-tat by reinstalling its own loudspeakers.

For decades, both Koreas aired constant messages denouncing each other as part of psychological warfare campaigns to weaken the morale of opposing forces at the front.

Ending this earsplitting face-off was one of the key achievements of the Panmunjom agreement signed between South Korean President Moon Jae-in and North Korean leader Kim Jong-un in April 2018.

Just weeks after the agreement, Pyongyang started disassembling its loudspeakers at around 40 places on the DMZ, to which Seoul reciprocated by shutting down its 40 or so speakers installed at fixed locations and on vehicles.

Those steps to reduce hostilities at the border didn't last. This month, North Korea severed its communications with the South and unilaterally demolished the inter-Korean liaison office at Kaesong, sending a hostile message to Seoul.

The regime also announced it was mounting a campaign to send millions of propaganda leaflets into the South, which it characterized as reviving a campaign of agitation against “the enemy” in response to anti-Pyongyang activists in the South sending propaganda into the North.

Many in South Korea’s military are calling for Seoul to respond to the North’s loudspeakers with their own, sources say, given that the South’s speakers are much more advanced and can carry sound across the densely forested and hilly mountains of the DMZ more effectively than Pyongyang's.

This disparity in performance was why the regime reacted with great sensitivity when Seoul resumed loudspeaker broadcasts toward the North in 2010 following Pyongyang’s sinking of the South Korean warship Cheonan, and in 2016 after Pyongyang’s fourth nuclear test.

South Korea also has in its possession vehicles mounted with powerful loudspeakers capable of transmitting broadcasts as far as 20 kilometers (12 miles) north of the military demarcation line — the formal boundary within the DMZ separating the two sides.

But cranking up its loudspeakers would be a repudiation of the Panmunjom agreement, which is at the center of Moon’s rapprochement policy with the North.

And South Korea is worrying about the possibility of the North undertaking some kind of physical provocation that endangers South Korean troops or the public.

According to a military aircraft tracker, a total of eight reconnaissance flights were undertaken Tuesday by the South Korean and U.S. militaries around the Korean Peninsula on Tuesday, signaling the allies were monitoring the North’s every move.