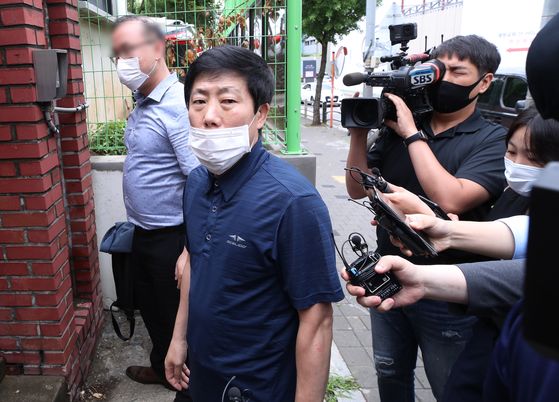 Park Sang-hak, head of Fighters for a Free North Korea, looks at the press before stepping into police offices in western Seoul for questioning on Tuesday. [YONHAP]

Park Sang-hak and Park Jung-oh, brothers who defected from the North, have been accused of violating an inter-Korean cooperation law and environmental regulations for floating balloons filled with leaflets and other materials across the border into the North on multiple occasions. No charges have been filed yet against either brother.

The elder Park, a well-known defector and activist with close ties to right-wing organizations in Seoul, heads Fighters for a Free North Korea, while his brother is chief of the group Keun Saem.

On Tuesday morning, the Seoul Metropolitan Police Agency summoned the pair for questioning -- just days after police raided the groups’ offices in southern Seoul for evidence on Friday.

The interrogations followed a hearing held on Monday by the Ministry of Unification regarding an impending decision on whether to revoke the two groups’ government permits that allow them to operate as nongovernmental organizations.

Though the groups were responsible for sending leaflets into the North more than a dozen times throughout the last two years, their release of 500,000 leaflets across the border on May 31 set off a wave of retaliatory actions from Pyongyang including a break in all telephone communications with South Korea and the North’s unilateral demolition of the inter-Korean liaison office in Kaesong.

“The leaflets bore a special kind of dirty, insulting propaganda, aimed at the leader’s spouse. And it was all made in such a low-grade way, with Photoshop,” Matsegora said. “This, of course, is unacceptable, and it caused serious discontent [in North Korea]. Not only among the authorities, but among the people, as well."

In response to the leaflets, which state media called “an intolerable insult” that rattled the country’s “most sacred mental core,” the regime launched weeks of state-sponsored public rallies condemning defectors in the South and announced it would unleash its own leaflet campaign towards Seoul.

Propaganda leaflets were a staple feature of the psychological warfare between the two Koreas for decades. Most were designed to promote the superiority of each side’s political system, but at times also made use of sensual content to coax — or provoke — inhabitants of the other.

Leaflets made by the North in 2016, for example, also contained images of South Korean President Park Geun-hye grafted onto nude photographs.

Unlike Pyongyang, the South Korean government stopped all official leaflet dispatches after the first summit with the North in 2000, although activist groups subsequently picked up the task.

Right-wing defector groups in the South -- like those run by the Park brothers -- are almost as critical of Seoul’s liberal governments as they are of the North. Much of their propaganda also features lurid satires of South Korean leaders, including incumbent President Moon Jae-in, seeking a more conciliatory approach to North Korea.

The activities testify to the South's freedom of speech, the groups argue, also stressing that recent steps to curb leaflet dispatches were attempts to muzzle what they claim are “humanitarian” actions.

Matsegora, however, stressed the leaflets were only a pretext for the regime’s more aggressive measures towards Seoul throughout June, according to TASS.

The true root of North Korea’s escalation, the envoy said, lies with the regime’s dismay with Seoul for South Korea’s refusal to conduct bilateral economic exchange projects in the absence of a denuclearization agreement between Pyongyang and Washington.

“In general, it was clear that [the escalation] would happen. And, regrettably, it happened," he said.