Hashima Island, also known as Battleship Island, located off the coast of Nagasaki in southern Japan, is included in a group of Meiji era facilities designated as Unesco World Heritage site in 2015. Hundreds of Korean forced laborers worked at the coal mines on this island during World War II. [YONHAP]


Hashima, an abandoned island that was once a thriving coal mining facility located off the coast of the southwestern Japanese port city Nagasaki, is getting a second lease on life as a Unesco World Heritage tourist site.

But the cost of Japan’s industrialization has a darker side: the sweat and blood of forced laborers, including hundreds of Koreans, who slaved away in undersea coal mines on Hashima, also known as Battleship Island, during World War II, faced harsh conditions and sometimes even death.

For Koreans, Hashima, a former coal mining facility touted by Tokyo as having contributed to the modernization of the country, is a haunting reminder of tens of thousands of laborers forcibly conscripted to work for Japan during its brutal colonial rule from 1910-45.

In July 2015, 23 Japanese industrial facilities from the Meiji era were designated as Unesco World Heritage sites during a meeting of the World Heritage Committee in Bonn, Germany.

Seoul at the time strongly opposed the Unesco designation because forced labor had been employed at seven of those facilities, including Hashima Island.

In turn, Japan pledged under a World Heritage Committee recommendation to make sure to convey the "full history of each site.”

Last week, a new information center on the 23 facilities from the Meiji Industrial Revolution in Tokyo opened to the public. But the information presented at the center fell short of the promise made by Japan five years ago to Unesco to properly commemorate wartime forced labor victims.

Instead, the center appears to try to ignore or gloss over the brutalities faced by forced laborers by introducing testimonies by survivors saying otherwise.

“Five years have already passed since Unesco World Heritage site designation, and we can’t help but conclude after seeing the information center that Japan didn’t have the intention from the very beginning to tell accurate history and that the pledge was only to appease the [World Heritage Committee] to get the designation,” said Seo Kyoung-duk, a professor of general education at Sungshin Women's University in Seoul who has actively publicized issues related to Japanese distortions of history. 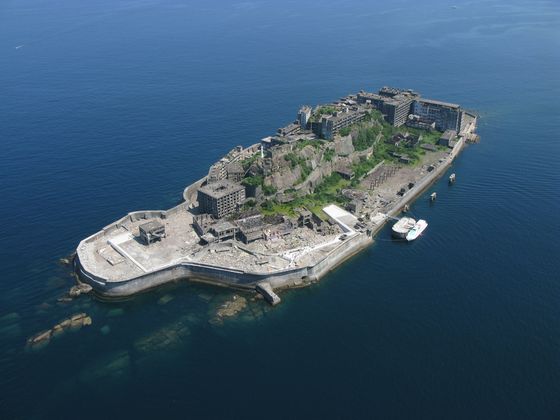 
From ‘Island of Hell’ to Unesco

Coal was discovered on Hashima, a 6.3-hectare artificial reclaimed island located some 18 kilometers from the port city of Nagasaki, in the 19th century, and Mitsubishi Group purchased the island in 1890. Mitsubishi built concrete apartments on the island to house the workers and their families, making Hashima at its peak very densely populated, with thousands of residents, and the hub of Japan’s coal mining industry.

But over the decades, Korean forced labor survivors who worked in the Hashima undersea coal mines have testified of working in prison-like conditions over 12 hours a day with little or no pay and constantly short of food. Sometimes they were forced to go into exceedingly underground shafts with little to no clothing. Koreans have dubbed Hashima as “island of hell,” and survivors have described that a small island next to Hashima as the “crematory,” where people who died while working or escaping from Hashima were cremated.

Between 500 and 800 Koreans worked as forced laborers at Hashima Island during the Pacific War between 1943 and 1945, according to a report released in 2012 by the Commission on Verification and Support for Victims of Forced Mobilization under Japanese Colonialism, under the Korean Prime Minister’s Office. The Pacific War refers to the parts of World War II that took place in the Pacific Ocean.

The commission further found that 122 Koreans were confirmed to have died after being taken to work in coal mines on Hashima Island.

Mitsubishi eventually closed down the mines in Hashima in 1974, after the decline in the use of coal, and handed over the ghost island to local authorities in 2001.

Japan for years campaigned for the designation of the Meiji era industrial facilities and the group of 23 sites on the World Heritage list. The designation was granted in July 2015, with a caveat.

Korean and Chinese laborers, as well as Allied prisoners of war, were forced to work under brutal conditions at some of these Japanese coal mines and shipyards during World War II. Japan pledged to honor this history.

Kuni Sato, then Japanese ambassador to Unesco, recognized in a meeting in Bonn, Germany, that “there were a large number of Koreans and others who were brought against their will and forced to work under harsh conditions in the 1940s at some of the sites.”

It was the first time Tokyo clearly acknowledged that Korean laborers were forced to work against their will for Japan during World War II on an international platform.

However, then Japanese Foreign Minister Fumio Kishida the very next day drew a line and said "forced to work" is different from "forced labor." 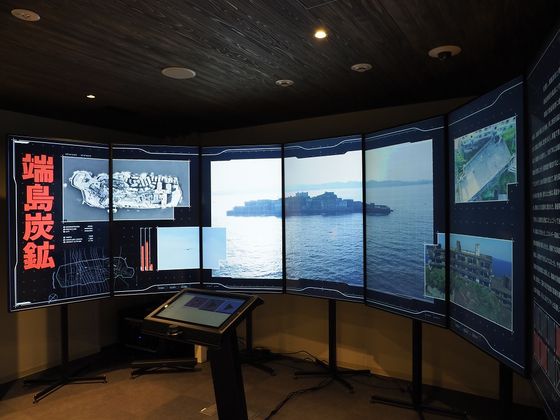 Japan on June 15 opened to the public the Industrial Heritage Information Centre in Tokyo introducing 23 facilities from the Meiji Industrial Revolution designated as Unesco World Heritage sites. Pictured is an exhibition on Hashima Island. [YONHAP]

The 1,078-square-meter information center held an opening ceremony on March 31 but remained closed to the public until last week because of the coronavirus pandemic. Reporters were offered a sneak preview the weekend before the official opening but were not able to photograph or take videos of the exhibitions.

An exhibition dealing with Hashima collected testimonies of former residents of the island claiming they had never heard of forced labor victims or that there had been no indications of discrimination against the Korean workers.

The exhibition played video footage of an interview of the late Fumio Suzuki, a second-generation Zainichi Korean, or a Korean living in Japan, who spent his childhood on Hashima Island during the war where his father worked in the coal mines.

In the interview, when asked if he was bullied during his youth on the island, Suzuki denied this and said that rather, he had been “beloved.” He also denied that there hadn’t been whippings, indicated that his father didn’t work naked but in a coal mine work suit and that he got paid.

“There was no discrimination against Korean laborers,” he said, citing his father.

Also displayed was a wage stub paid to a Taiwanese conscripted worker at a Nagasaki shipyard in an apparent attempt to show that workers had been given wages.

The center displayed the text of the 1965 treaty that normalized relations between Korea and Japan. Japan claims this treaty settled all issues of compensation related to its colonial rule of Korea.

“Japan appears to have made the exhibition to suit their narrative and show that there were no forced laborers,” said Prof. Seo Kyoung-duk.

He said regarding the testimonies of the former residents that the location where they worked and where the Korean forced laborers worked "wouldn’t have been the same."

Seo questioned the location of the information center in a public building in far-off Tokyo, rather than Nagasaki, and also the discreet timing of its opening amid lockdowns because of the ongoing coronavirus pandemic.

Korean Second Vice Foreign Minister Lee Tae-ho summoned Japanese Ambassador to Seoul Koji Tomita on June 15 to lodge a protest over the failure to implement the follow-up measures pledged by Tokyo to Unesco.

The Korean Ministry of Foreign Affairs said that it is “deeply regrettable” that the new information center “counters Japan's pledge and includes content that distorts historical facts” and that it was “concerning and disappointing” that there were no efforts that could be spotted made toward commemorating forced labor victims. 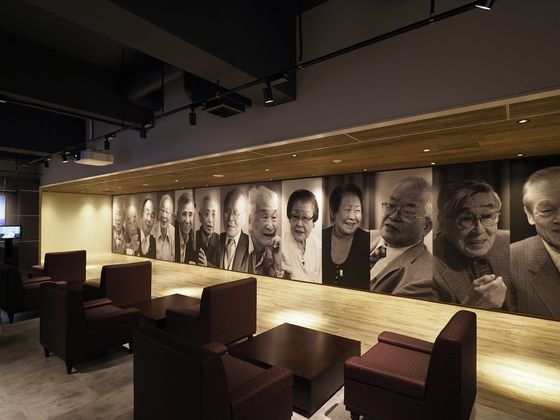 Photos of former residents of Hashima Island at the the Industrial Heritage Information Centre in Tokyo. Japan pledged in 2015 to commemorate laborers forced to work under brutal conditions at some of these industrial sites during World War II, but the center does not introduce such content in its exhibitions. [YONHAP]

Seoul in turn is stepping up diplomatic outreach to Unesco and the 21 member states of the World Heritage Committee to ensure that Japan will keep its pledge to the international community to commemorate victims of wartime forced labor.

But the issue is more complicated than it appears on the surface, especially as Seoul and Tokyo have long clashed over historical issues and is also in the midst of a trade spat.

“We can see this as a process of historical revisionism,” said Seo on the new information center. “If Japan concedes on one issue, they seem to believe that they would have to publicly recognize others such as the wartime sexual slavery issue and the Dokdo issue.”

Seo produced a short video about Hashima Island that played in Times Square in July 2017 as a part of a social campaign to raise global awareness about its history of forced labor after the Unesco designation.

“What is most important is to state the facts exactly as they are, to acknowledge that on Hashimia Island there had been Korean and Chinese forced laborers and to present the correct history,” said Seo. “If Japan recognizes accurate history, Koreans wouldn’t have anything else to say on this matter.”

Seo pointed out that if Japan doesn’t take action to properly recognize the forced labor history of its World Heritage sites, the next step might be to “set a precedent” by moving toward delisting the Hashima site.

“It was a conditional designation,” said Seo. “There was a promise to the World Heritage Committee, and countries signed on based on this promise.”

Seo referred to the example of Germany's Zollverein Coal Mine which was unanimously designated as a World Heritage site in 2001 because an exhibition center clearly described the site’s forced labor history.

“I think we have realized through this that there is no use in fighting with Japan anymore,” said Seo. “We waited for five years already. We now need to continuously raise the issue with Unesco and the 21 members of the World Heritage Committee. If this doesn’t bring about a change, then we may just need to take a stronger stance and set the precedent by motioning to remove the designation of Hashima Island from the World Heritage list.”