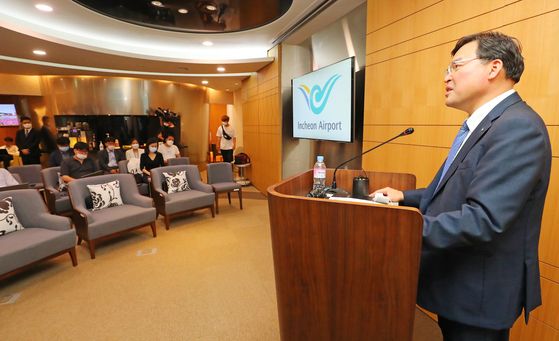 The President and CEO of the Incheon International Airport Corporation give a briefing on the company's decision Monday at a meeting room in the airport in Incheon. [YONHAP]


Incheon International Airport Corporation announced Monday plans to complete the hiring of nearly 10,000 contract employees as permanent employees by the end of June, three years after the airport committed to creating stable jobs.

It will be the first government company to follow through in President Moon Jae-in’s campaign to upgrade all temporary workers to permanent workers. In May of 2017, President Moon announced a “zero-contract-worker initiative” and promised to put an end to unstable employment in the public sector.

The airport has been outsourcing around 84 percent of service work at the airport in Incheon, and the contracts for these workers had a fixed duration.

A joint labor-management committee completed three rounds of discussions to iron out details regarding wages, benefits and hiring practices.

The airport said that a total of 9,785 employees will be affected. This accounts for 9.3 percent of temporary service workers in the public sector, the most for a single government-owned company.

Among them, 2,143 will be hired directly by the airport, and the remaining 7,642 staff — airport management staff, security personnel and system managers — will be hired by three different affiliated companies.

A total of 1,902 security inspector officers will be hired as “private police,” resolving what was thought to be the biggest challenge for the airport in fulfilling the initiative. Private police are armed officers dispatched to guard important government landmarks and business facilities. According to the airport, this will allow them to maintain the same level of security.

Incheon International Airport Corporation’s decision to upgrade temporary security guards to permanent positions was met with criticism, with some arguing that it bypasses the normal recruitment process and adds too many permanent employees in this unorthodox manner. The company said it will hire people through an open recruitment process in order to guarantee transparency.

Incheon International Airport Corporation was ranked No. 1 for the past three years among fresh graduates as the most desirable government-owned company to work at, according to a survey by job portal Incruit.

Don’t take away the youth’s hope