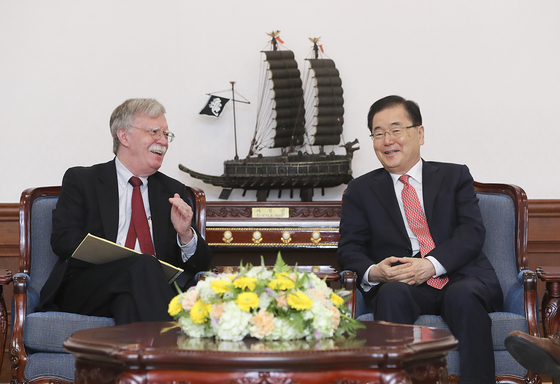 The book — the latest in a succession of tell-all accounts from former Trump officials seeking to profit off stories of their services to a mercurial president — generated intense controversy in Seoul due to Bolton’s disparaging account of South Korean President Moon Jae-in’s approach to diplomacy with North Korea.

Blue House National Security Office Director Chung Eui-yong, who was Bolton’s counterpart and features frequently in the narrative, said much of the book’s account of South Korea was “distorted,” and instead of presenting accurate facts, reflected Bolton’s own biases and prejudices about the process.

“Publicly disclosing the contents of discussions between governments is a violation of a basic diplomatic principle, and can severely damage trust in future negotiations,” Chung said.

Stressing that publication of such a work may “significantly harm efforts to strengthen the South Korea-U.S. alliance,” Chung added that Seoul had delivered its position to the White House, and expected the United States to take appropriate measures to uphold diplomatic conventions.

Meant as a scathing criticism of Trump’s eccentric and often erratic foreign policy decisions, Bolton’s book presented an unapologetic account of his attempts to stop Trump from reaching a compromise with North Korean leader Kim Jong-un on the latter’s nuclear and missile programs.

Moon, whose stance on North Korea is described by Bolton at one point as “schizophrenic,” is depicted as imprudent and more keen on advancing his inter-Korean agenda rather than the North’s denuclearization.

Neither Chung nor Yoon Do-han, the Blue House communications director, referred to any specific portions of Bolton’s book in their public statements, while a high-ranking Blue House official said it would be “inappropriate” to do.

Lawmakers from South Korea’s ruling Democratic Party (DP) also slammed Bolton for his rude descriptions of Seoul’s leadership, with one, Rep. Kim Han-jung, calling them the “arguments of a shallow hawk.”

Rep. Youn Kun-young, who acted as one of Moon’s closest aides and his special envoy to the North ahead of the first inter-Korean summit in Panmunjom in April 2018, said there were “so many parts [of the book] that do not match reality,” but that he was refraining from arguing against every claim because he would not break diplomatic protocol like Bolton did.

“[The book] is a truthful admission of how former adviser Bolton tried to derail the North Korea-U.S. summit at Hanoi [in Vietnam in Feb. 2018], and the true sentiments of the American neo-conservatives and arms dealers,” said Rep. Kim Kyung-hyup, taking aim at a group of U.S. foreign policy advisers, including Bolton, who held sway over foreign policy in several Republican administrations in the United States.

The main opposition United Future Party (UFP), which has been critical of talks with the North, seized upon the opportunity to slam the Moon administration, saying Bolton’s account portrayed an “embarrassing drama” in which Moon stood up on behalf of the North Koreans rather than act like the mediator he said he would be.

“It is beyond shocking, almost humiliating, that [South Korea] was so excluded from U.S.-North Korea relations,” said a UFP spokesman.