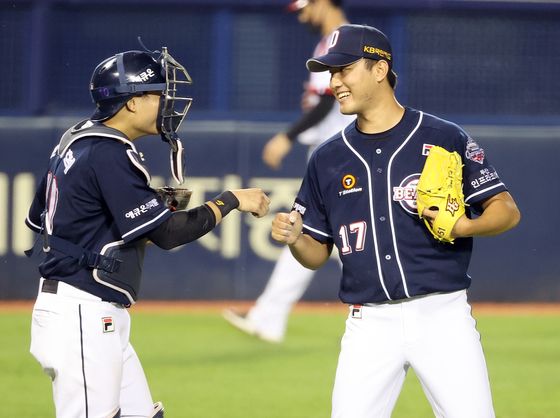 The Doosan Bears pitcher Hong Geon-hui and cacher Park Sei-hyok celebrate after the Bears picked up their third win against the LG Twins at Jamsil Baseball Stadium in southern Seoul on Sunday. [ILGAN SPORTS]


The Doosan Bears made a remarkable return to form over the weekend, sweeping local rival the LG Twins with three decisive victories.

The Bears have struggled in the last few weeks, plagued by weak pitching and a series of injuries. The Bears took the ignoble title of the team that broke the Hanwha Eagles' record losing streak back on June 14, kicking off a four-game skid that saw the team drop two to the Eagles and two to the Samsung Lions.

A victory against the Lions on June 18 broke the streak, but things weren't looking great going into the weekend, with the Twins one spot above the Bears at No. 2 in the table ahead of the series on Friday.


But it turned out there was no reason to worry. Facing off against their old rivals, the Bears were back on form. 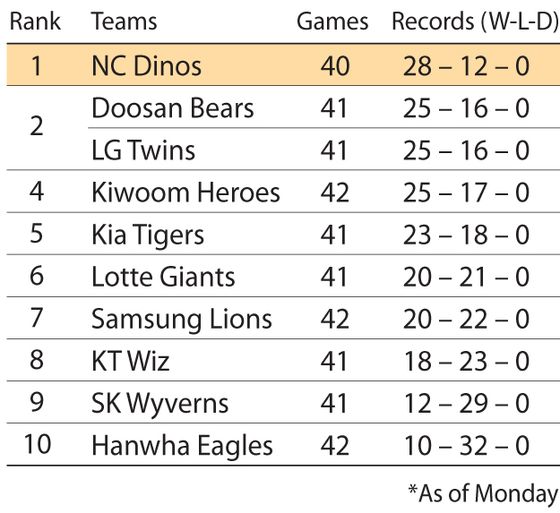 The series started with a huge 18-10 victory for Doosan on Friday, followed by another big 8-2 win on Saturday. The Bears finished the sweep going 3-1 over LG on Sunday.

As well as emphatic at-bats, the Bears have also clearly benefited from the recent addition of pitcher Hong Geon-hui. The Bears traded infielder Ryu Ji-hyuk with the Kia Tigers for Hong, at the time a controversial move because Ryu is a well-loved utility player that had often come through for the Bears in the past.

Over the weekend, Hong proved his worth, appearing in two of the three games against the Twins. On Friday, Hong picked up the win in relief, giving up one run while striking out four throughout two and two-thirds of an inning. Then on Sunday, he once again appeared on the mound in the very last inning to pick up a save.

Thanks to the win, the Bears have now flipped their four-game losing streak into a four-game winning streak and tied for second with the Twins. They are 3.5 games behind the NC Dinos.

For the Twins, the weekend sweep was a return to old territory. No matter how well the Twins are doing, the Bears are nearly always able to get the better of them. Looking at the head-to-head record between the two Jamsil clubs this season, the Bears are already well ahead with five wins and only a loss.

Things get worse looking at the bigger picture. Since the 2018 season, when manager Ryu Joong-il was appointed, the Bears have picked up 35 wins and only eight losses against the Twins.

“I think our players are trying too hard to win,” Ryu was quoted as saying on Yonhap. “I just hope they’ll look at the Bears like any other team. I want to be at least [at a] 0.500 [winning percentage] against Doosan this year.”

While the Twins still haven’t worked out how to beat their rivals, the Bears’ manager Kim Tae-hyung also isn’t too sure why his club plays well when they face the Twins.

“I am not sure if anyone would know the reasons,” Kim said. “We have only played a few games against each other. The season is not over, and let’s see how the remaining games play out.”

As the two teams have only played six games so far, there are still 10 more Jamsil Derbies to play this season.

Looking at the other teams over the weekend, the Kiwoom Heroes also swept their series against the SK Wyverns. Along with the sweep, the Heroes also made headlines for signing controversial infielder Addison Russell, reportedly for $530,000.

The Hanwha Eagles won their series against the top ranked Dinos after winning the first two games on Friday and Saturday. Unfortunately, they couldn’t sweep the series as they lost Sunday’s game 7-9. On Monday, the Eagles announced that they’ve parted ways with their foreign outfielder Jared Hoying for Brandon Barnes. Barnes was reported to have signed with the Eagles for $200,000 — $50,000 in guaranteed salary, $50,000 in signing bonus and $100,000 in incentives.

Hoying had played for the Eagles for three seasons and helped the team advance to the postseason for the first time in 10 years back in 2018. This season, he’s been struggling severely as he has a 194 batting average with 14 RBIs and only four home runs.

For first time in years, the LG Twins are kings at Jamsil