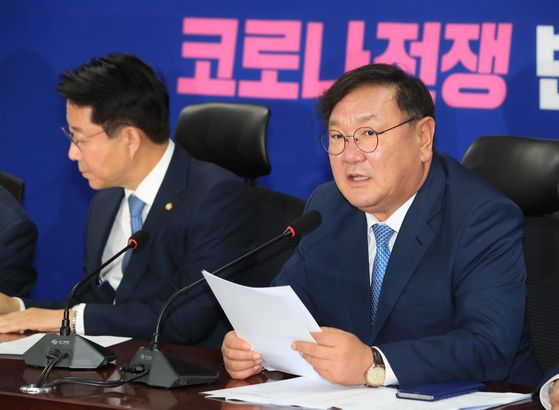 Rep. Kim Tae-nyeon, floor leader of the ruling Democratic Party, talks during a party policy coordination meeting on Thursday. Kim said the country should push to declare a formal end to the Korean War. [YONHAP]

The ruling party Thursday proposed a formal end to the Korean War a day after North Korea's leader retracted military threats against the South.


“In order to end tensions and confrontations and start a generation of a permanent peace, a declaration of a formal end to the war is a must,” Rep. Kim Tae-nyeon, floor leader of the ruling Democratic Party (DP), said during a party meeting.

Thursday was the 70th anniversary of the start of the 1950-53 Korean War, which ended in an armistice. The war was between the North, supported by China and the Soviet Union, and the South, with support of United Nations forces, mainly from the United States.

“During the past three North-U.S. summits, leaders of the two countries talked about a formal end to the war, but unfortunately it was not realized,” Kim said. “We must put forth efforts and renew the campaign since we are a directly involved country.”

On June 15, a group of 174 lawmakers led by DP Rep. Kim Kyung-hyup sponsored a motion calling for a formal end to the Korean War.

The opposition United Future Party (UFP) said it was irresponsible and irrational for the ruling party to submit the motion while military tensions between the two Koreas were escalating.

The next day, North Korea blew up an inter-Korean liaison office in the Kaesong Industrial Complex, forcing the DP to backpedal on its push for a formal end to the war.

Its attitude, however, changed after North Korean leader Kim Jong-un seemed to slam the brakes on military confrontation with the South. The North’s state media reported Wednesday that Kim “suspended the military action plans against the South,” and the ruling party jump-started its campaign.

Other DP members also called for a formal end to the Korean War.


“It is fortunate that escalation of tensions has stopped,” said Kim Boo-kyum, a former DP lawmaker with an ambition to become the next DP chairman. “We need to take one more step to end the armistice and open a new history on the Korean Peninsula to realize peace.”

DP Rep. Kim Kyung-hyup, the main writer of the motion, said its passage will send a message not only to Pyongyang but also to Washington.

“It will be a powerful signal to the North that we need to start discussing a peace treaty,” he said in an interview with BBS Radio Thursday morning.

Kim dismissed the UFP’s argument that declaring a formal end to the war is a declaration of the South’s surrender. “It will be a political declaration by four participants in the Korean War,” he said. “It will be an international promise, and then we can start a discussion to establish a peace regime.”

He also dismissed the opposition’s claim that the U.S. Forces Korea will leave the South if the war comes to a formal end.

“The U.S. troops are stationed in Korea based on the Korea-U.S. mutual defense treaty,” he said. “It has nothing to do with the truce or a formal end to the war.”