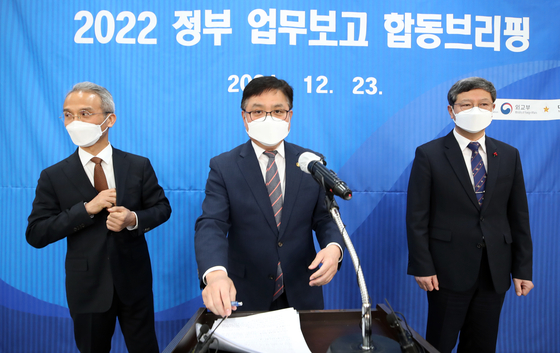 Choi Young-joon, vice minister of unification, center, Yeo Seung-bae, deputy foreign minister, left, and Yoo Dong-joon, a senior-ranking official of the Defense Ministry, right, host a joint press conference at the Office of the Inter-Korean Dialogue in central Seoul on the South's North Korea policies to come in the last five months of the Moon Jae-in administration. [YONHAP]

The Moon Jae-in administration will use its last five months in office to focus on restarting dialogue with North Korea, and use the end-of-war declaration as a tool to engage Pyongyang, announced the top officials of the unification, foreign affairs and national defense ministries in a joint press briefing on Thursday.

“We are at a critical time, when our efforts can have a lasting impact on the situation of the Korean Peninsula,” said Choi Young-joon, vice minister of unification, while addressing the press at the Office of the Inter-Korean Dialogue in central Seoul.

“The government is pushing for a declaration to end to the Korean War as a gateway to peace on the Korean Peninsula and as a catalyst for negotiations on denuclearization.”

The Moon government has been pushing for an official declaration to end the war. Seoul and Washington have been working on the wordings of such a declaration this year.

The 1950-53 Korean War ended with an armistice, not a peace treaty.

“The declaration of an end to the war could be a good starting point for resuming dialogue between the two Koreas and also between the United States and North Korea,” Choi said. “For the past four years, the Moon Jae-in administration has consistently made efforts to denuclearize the Korean Peninsula and establish lasting peace [...] In retrospect, the PyeongChang Winter Olympics provided the opportunity of three inter-Korean summits, two U.S.-North summits, and the Panmunjom meeting. I think that we have made important achievements in the peace process.”

The press conference was also attended by Deputy Foreign Minister Yeo Seung-bae and senior-ranking officials of the Defense Ministry.

When asked by a reporter about whether North Korean provocations such as missile and weapons tests would be a hindrance to the Moon government’s peace initiative with the North, a Defense Ministry official said the word “provocation” may be misleading for certain weapons tests.

“We consider tests of SLBM [submarine-launched ballistic missile] to be a threat, not a provocation,” said the official.

Defense Minister Suh Wook said the same during an audit meeting at the National Assembly on Oct. 21, noting that the North’s SLBM development is in its primary stages and is not necessarily a military provocation but a threat.

Two days prior, North Korea test-fired a new type of SLBM, marking the first of such tests since October 2019.

“Last year, there were situations that should not have happened, such as the bombing of the North-South Joint Liaison Office, the disconnection of inter-Korean communication lines, and the death of a South Korean public official in the West Sea,” Choi said. “However, since this year, there are more messages of dialogue than confrontation between the two Koreas and the U.S., and in October, the inter-Korean communication liaison office was restored again, raising the possibility of dialogue and involvement.”