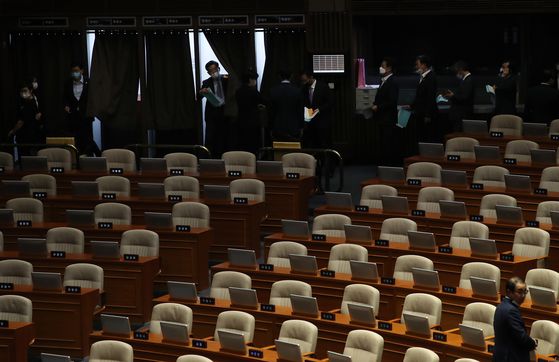 Lawmakers from the ruling Democratic Party cast ballots to elect chairs of standing committees on Monday at the National Assembly. Seats of the opposition United Future Party are empty because its lawmakers boycotted the session. [YONHAP]


The ruling party on Monday revived a tradition not seen since democratization in 1987 of controlling all standing committees in the National Assembly.

The Democratic Party (DP) used its majority of 176 lawmakers in the 300-member legislature to elect 11 of its lawmakers to chair standing committees during a plenary session boycotted by opposition parties. Elections to six other committees were held on June 15, all won by the DP.

National Assembly Speaker Park Byeong-seug opened a plenary session Monday afternoon and allowed the votes, despite boycotts by the main opposition United Future Party (UFP) as well as the progressive Justice Party, a longtime ally of the DP.

As of Monday, DP lawmakers were elected to chair 17 out of the 18 standing committee. The National Intelligence Committee chair election was not held because the law requires an agreement between the DP and the UFP to nominate a candidate.

In opening remarks Monday, speaker Park said he was forced to form the standing committees despite the UFP’s protest because the legislature needs to get to work. He said it has been one month since the new Assembly’s term began.

The UFP is boycotting the legislature since the DP wielded its majority on June 15 to clinch the chairs of six key standing committees. It was particularly upset with the DP for ignoring the tradition that a senior lawmaker of the largest opposition party occupies the chair of the powerful Legislation and Judiciary Committee, the final gatekeeper of all bills before they are voted on.

Among the 11 committees that elected their heads on Monday was the Special Committee on Budget and Accounts, responsible for a supplementary budget recently submitted by the Moon Jae-in administration. Rep. Jung Sung-ho was elected to chair the committee.

Rep. Kim Tae-nyeon, floor leader of the DP, was elected chairman of the House Steering Committee. Rep. Youn Kwan-suk was elected the National Policy Committee head and Rep. Jin Sun-mee the chair of the Land, Infrastructure and Transport Committee.

Earlier in the morning, Speaker Park arranged a final negotiation between the floor leaders of the DP and the UFP, but their talks ended after 35 minutes without a deal.

“The UFP declared that it won’t chair any committees,” National Assembly spokesman Han Min-soo said after the talks. “The DP, therefore, decided to chair all 18 standing committees and operate them with responsibility.”

The last time was during the Chun Doo Hwan presidency. On May 13, 1987, Chun’s ruling party single-handedly opened a plenary and elected its members as the National Assembly speaker, deputy speaker and heads of all standing committees.

“The Chun regime surrendered to the democracy protests in June 1987, and the June 29 declaration [by Roh Tae-woo, a longtime ally of Chun who was designated his successor,] opened a door to amend the Constitution to introduce direct elections of presidents,” Joo said in his Facebook message.

“History will remember that the Moon administration entered its path to a fall on June 29, 2020, 33 years after the day the Chun regime kneeled before the people,” he wrote.

Starting with the 13th National Assembly, the first group of lawmakers elected in April 1988 after the country’s democratization in June 1987, a tradition was established that parties split committee chairs proportionally to the numbers of lawmakers they control.

For decades, the tradition was upheld.