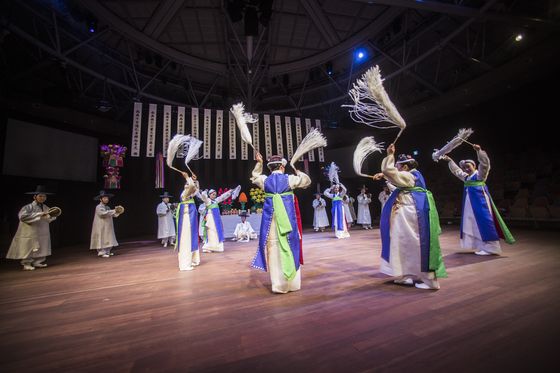 Traditional shaman ritual "Donghaean Byeolshingut" will be staged on July 5 at the National Theater of Korea in central Seoul. [NATIONAL THEATER OF KOREA]

National Theater of Korea, Haneul Theater
July 5: A traditional shaman ritual, or gut, will be performed by members of Donghaean Byeolsingut Preservation Association.
Of all the remaining gut, Donghaean Byeolshingut is best known for its sophisticated dance moves. The ritual normally takes place for two or three days to soothe the souls of the deceased, but it was shortened by nine hours as part of the annual Yeowoorak Festival.
Hosted by the National Theater of Korea, the festival, in its 11th year, has been making efforts to show the beauty of traditional Korean music by blending it with other genres of music from classical to jazz to hip-hop.
It is a rare chance to see the prototype of gut.
The performance lasts nine hours, but the audience is allowed to leave and re-enter freely.
All seats are priced at 70,000 won ($58).
The performance starts at 1 p.m.
Dongguk University Station, line No. 3, exit 6.

ALAN WALKER
Olympic Park, Olympic Hall
Aug. 14: Electronic dance music artist and music producer Alan Walker is making his way to Seoul
Walker, who performs with his face covered by a black hoodie and a mask, is known for songs such as “Fade,” “Sing Me to Sleep,” “Alone” and “Tired.”
Walker has appeared at many local music festivals since 2017, and he is widely known among Korean music fans. The musician made a name for himself in the local music scene by collaborating with Lay, a member of boy band Exo, on a single titled “Sheep” in 2018.
The show starts at 8 p.m.
Tickets range from 110,000 won to 132,000 won.
Olympic Park Station, line No. 5 and 9, exit 3. 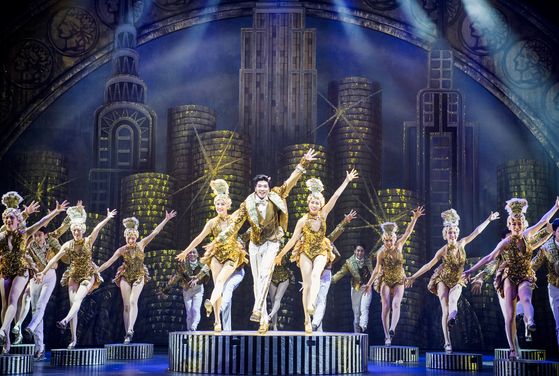 Musical ’42nd Street“ is coming to Seoul in four years. Set in 1933, the musical depicts life and dream of dancer hopefuls in Broadway. [SEM COMPANY]

Charlotte Theater
Through Aug. 23: “42nd Street,” one of the world’s longest-running Broadway shows, is coming to Seoul. Set in 1933, the musical depicts the life of Peggy Sawyer, who dreams of becoming a dancer on Broadway.
The entire performing industry has been hit hard by an ongoing recession, but an audition for musical “Pretty Lady” has opened and Peggy wants to try her luck.
Meanwhile, veteran stage star Dorothy Brock gets cast for the lead role after her wealthy lover Abner Dillon invests a lump sum of money on the musical.
Peggy secured a spot as one of the chorus singers in the musical, but she is fired for accidentally breaking Dorothy’s ankle during a rehearsal.
With the absence of the lead, the musical is about to close, but other chorus girls suggest Peggy should play the role of Dorothy.
The musical starts at 8 p.m. on Tuesdays, Wednesdays and Thursdays; 3 p.m. and 8 p.m. on Fridays; 2 p.m. and 6:30 p.m. on Saturdays; and 2 p.m. on Sundays.
Tickets range from 60,000 won to 140,000 won.
Jamsil Station, line No. 2, exit 3. 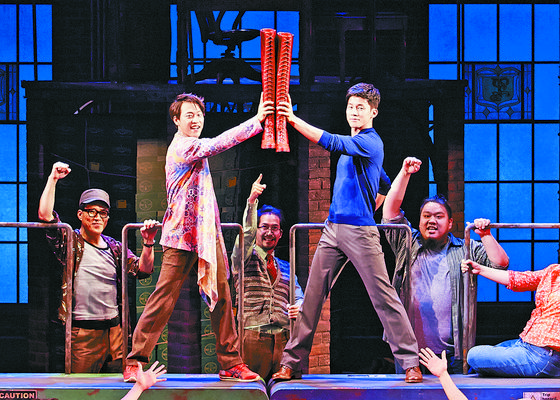 Korean production of musical Kinky Boots will kick off next month at the Blue Square in central Seoul. [JOONGANG ILBO]

KINKY BOOTS
Blue Square, Interpark Hall
Aug. 21 – Nov. 1: Charlie Price takes over the family business from his father and begins to run a shoe factory, but he soon realizes he is on the verge of bankruptcy. In a bid to find a breakthrough, the businessman unwillingly teams up with a drag performer named Lola to produce a line of high-heeled boots for other drag queens called “kinky boots.”
Through the relationship between the unlikely pair, the musical spotlights how people from different backgrounds come to understand each other.
Lee Seok-hoon from the K-pop trio SG Wannabe and Kim Sung-kyu from the K-pop boy group Infinite alternate the role of Charlie while three musical actors — Park Eun-tae, Choi Jae-lim and Kang Hong-seok — are triple cast for the role of Lola.
The musical starts at 8 p.m. from Tuesdays to Fridays, 2 p.m. and 7 p.m. on weekends and national holidays. There are no shows on Mondays.
Ticket prices range from 60,000 to 140,000 won.
Hangangjin Station, line No. 6, exit 2 or 3.

CLARA-JUMI KANG & SON YEOL-EUM DUO RECITAL
Seoul Arts Center, Concert Hall
Sept. 4: Violinist Clara-Jumi Kang and pianist Son Yeol-eum join hands for an upcoming recital. The two musicians first collaborated with each other in 2012 at the Carnegie Hall in New York. The collaboration was so well received that the two have been playing together on and off since then.
The last time the duo performed on home soil was in 2016.
Although Kang and Son played as a duo professionally in 2012 for the first time, the two have known each other for a long time and played together a lot when they attended Korea National University of Arts in 2004.
The two will play pieces including Richard Georg Strauss’ "Sonata for Violin and Piano in E flat major op.18" and Stravinsky’s “The Fairy's Kiss-Divertimento.”
Kang is a gold medal laureate of the 2010 International Violin Competition of Indianapolis. Son garnered attention when she performed as a soloist with the New York Philharmonic in 2004. In 2011, she won silver at the International Tchaikovsky Competition.
The concert starts at 8 p.m.
Nambu Bus Terminal Station, line No. 3, exit 5.