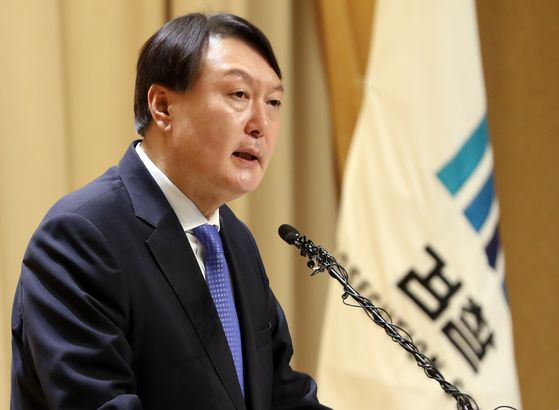 
Thanks to his head-butting with Justice Minister Choo Mi-ae, Prosecutor General Yoon Seok-youl is rising in popularity as a presidential candidate.

According to a Realmeter survey conducted from June 22 to 26, Yoon was supported by 10.1 percent of respondents as the next president, making him the third strongest contender and the strongest outside the ruling party. It was the first time that Realmeter included Yoon in its poll about presidential candidates, and the chief prosecutor has never admitted to any presidential ambitions.

According to the poll, former Prime Minister Lee Nak-yon, currently a lawmaker for the ruling Democratic Party (DP), received the most support with 30.8 percent. Gyeonggi Gov. Lee Jae-myung, also a DP member, ranked second with 15.6 percent.

The poll, commissioned by the internet media outlet OhmyNews, surveyed 2,537 adults nationwide. It had the confidence level of 95 percent with a plus or minus 1.9 percentage-point margin of error.

The battle between Yoon and Justice Minister Choo over prosecution reforms and corruption investigations fueled Yoon's popularity. When Gallup Korea conducted a similar poll from June 9 to 11, Yoon only scored 1 percent.

Choo has been critical of Yoon ever since she took office in January, and her criticisms escalated over the past weeks. Her latest attack was made Monday at a Legislation and Judiciary Committee meeting at the National Assembly.

Before the committee, Choo blamed Yoon for a cluster of coronavirus infections linked to the Shincheonji religious sect earlier this year.

“If he had ordered a timely raid of the Shincheonji church, we could have obtained a list of its members by analyzing CCTV records,” Choo said. “But we missed the 'golden time' and failed to secure important data. As a result, we failed to stop the spread of the disease.”

The opposition UFP sneered at Choo. “Yoon is the prosecutor general. He is not the president or the minister of health and welfare,” Rep. Cho Su-jin wrote Tuesday in a Facebook posting.

In March, the Central Disaster and Safety Countermeasures Headquarters conducted an administration investigation at the Shincheonji headquarters in Gwacheon, Gyeonggi, with the support of prosecutors. While politicians, including Choo, demanded a raid by the prosecution, public health authorities wanted a less invasive probe for the sake of the church’s cooperation.

Before the Legislation and Judiciary Committee on Monday, Choo agreed with a DP lawmaker who doubted the integrity of the prosecutors for going after former Justice Minister Cho Kuk and his family.

Cho, former presidential senior secretary for civil affairs who briefly headed the Justice Ministry from Sept. 9 through Oct. 14, 2019, was investigated for academic irregularities and alleged financial corruption. His family, including his wife and two children, were also investigated. Cho and his wife were indicted last year and their trials are still ongoing.

“There are questions about the prosecution’s fairness in the investigation into Cho Kuk and his family,” Rep. Shin Dong-kun said. “What do you think about this?”

“I cannot deny that there was an excessive, unreasonable investigation,” Choo said. “The prosecution’s investigations are the target of our reform measures. I am operating a task force to respect human rights during an investigation.”

Choo has been increasingly disparaging about Yoon and the prosecution over the past weeks.

In a Facebook message on Monday, she said prosecutors are challenging her because she is not a prosecutor-turned justice minister. “I have no fear in sacrificing myself,” she wrote. “My role is leading an irreversible reform of the prosecution.”

Last week, Choo also made more direct criticism of Yoon. During a lecture for first-term lawmakers of the DP on Thursday, she said Yoon had ignored half of her orders. “No justice minister has ever had to work with a prosecutor general who is this disobedient,” she said.