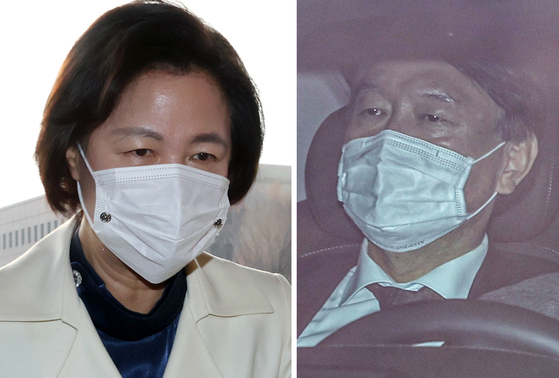 
The Ministry of Justice is withholding essential information regarding an unprecedented disciplinary hearing against Prosecutor General Yoon Seok-youl, including an internal inspection report cited as a ground to activate the process, the top prosecutor’s legal team said Monday.

“We will ask the Ministry of Justice again to send us the full record of the internal inspection and the names of the disciplinary committee members,” Lee Wan-kyu, legal representative of Yoon, said Monday in a message to the reporters. According to Lee, Yoon and his legal team are preparing for the disciplinary hearing, scheduled for Thursday, while missing basic information.

According to Yoon’s defense team, the ministry sent an inspection report on Dec. 3, but the record does not contain any meaningful information. The ministry offered them 2,000 pages of records related to the inspection into Yoon’s suspected ethical and legal violations, but they were mainly media article clippings and legal clauses governing the disciplinary process, Yoon's lawyers said.

The inspection report did not include any findings on the allegation that Yoon ordered an illegal surveillance operation against a judge, Yoon’s aides said.

Yoon also demanded to know the names of the disciplinary committee members, as the ministry was withholding them as of Monday, citing privacy issues. The ministry said it will decide on the matter Tuesday.

Yoon’s request to receive the operations manual of the disciplinary committee was also rejected. The ministry said it does not have such a manual.

On Nov. 24, Justice Minister Choo Mi-ae made a surprise announcement that she is suspending Yoon from duty, based on findings of a recent internal inspection. She detailed six broad allegations against Yoon, including a breach of political neutrality and illegal surveillance of a judge.

On Dec. 1, the Seoul Administrative Court granted Yoon an injunction to lift the suspension, allowing him to return to the office after a week. An oversight panel of the Ministry of Justice also concluded on the same day that it was unfair and unjust for Choo to suspend Yoon and start the disciplinary process.

At Yoon's request, the ministry postponed the disciplinary hearing to Thursday, following President Moon Jae-in’s order that it must avoid obvious flaws in the unprecedented disciplinary process against the prosecutor general.

In the meantime, Yoon launched a new legal case, filing a petition with the Constitutional Court to rule on the legality of the Act on Discipline of Prosecutors. He said the law’s clauses on the formation of the disciplinary committee are unfair, as it allows the minister of justice to select most committee members.

According to Article 5 of the law, the justice minister chairs the seven-member committee, with the remainder of the committee comprising the vice minister of justice, two prosecutors nominated by the minister and three additional minister appointees — one lawyer, one law professor and one person with significant relevant experience. The minister also has the power to name reserve members of the committee.

In his constitutional petition, Yoon argued that the law gives the minister powers to start a disciplinary process and to name the majority of the members on the disciplinary committee, allowing the person who brings charges against a prosecutor to effectively decide the outcome.

Yoon also asked the court to issue an injunction to freeze the effectiveness of the clauses until his constitutional challenge is ruled on. But it remains to be seen whether the Constitutional Court will rule on the injunction before the disciplinary committee takes place.

Law experts said Monday that the Ministry of Justice must guarantee Yoon’s defense rights in the disciplinary process, since it is operated based on the Criminal Procedure Act, which governs criminal investigations, indictments and trials.

“Since Yoon has the legal right to recuse disciplinary committee members, the ministry must give him the list of members,” a lawyer told the JoongAng Ilbo. “The Act on Discipline of Prosecutors also says offering documents should follow the Criminal Procedure Act, so the ministry also needs to offer Yoon the record he demands to see.”

Another lawyer said the ministry must guarantee Yoon’s defense rights if it wants to maintain the integrity and legitimacy of the outcome.

“If the committee is operated unfairly, the outcome can be challenged in the administrative suit later,” he said.